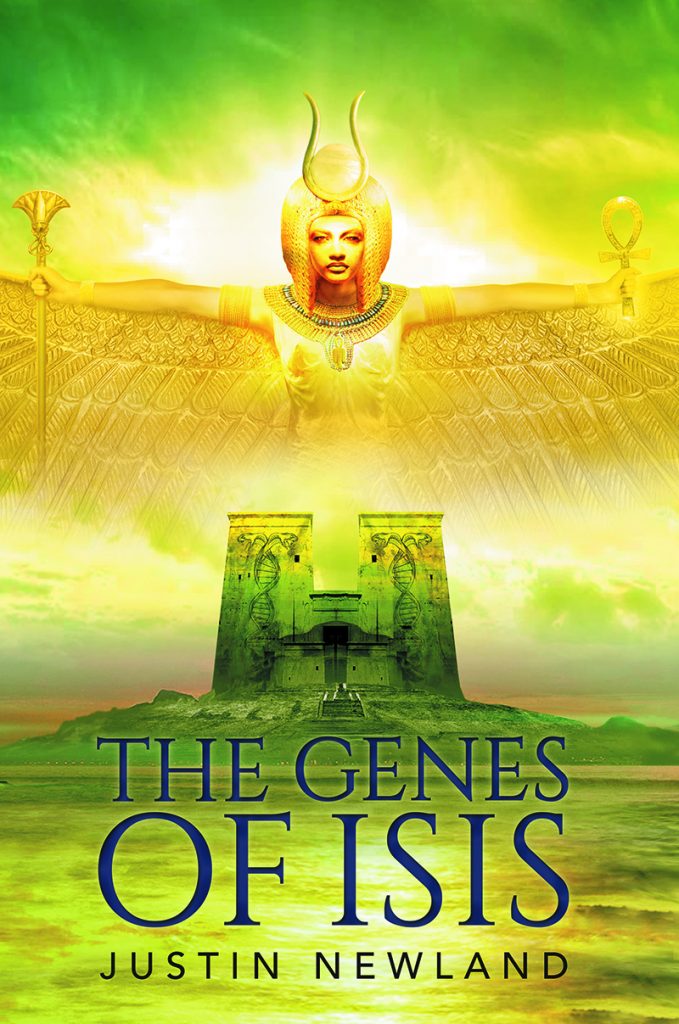 Akasha is a precocious young woman who lives in a world where oceans circulate in the aquamarine sky waters.

Before she was born, the Helios, a tribe of angels from the sun, came to Earth to deliver the Surge, the next step in the evolution of an embryonic human race. Instead, they left humanity on the brink of extinction and spawned a race of monstrous hybrids.

Horque is a Solarii, another tribe of angels, sent to Earth to rescue the genetic mix-up and release the Surge.

When Akasha has a premonition that a great flood is imminent and falls in love with Horque, her life becomes an instrument for apocalyptic change. But will it save the three races – humans, hybrids and Solarii – from the killing waters?

Opening Fryme’s package, she fingered the dark green leaves. She’d used hyssop many times before and had grown to enjoy its astringent odours. Deftly, she worked the herb into a paste and poured a droplet onto a wafer. Before lying down on the bench, she re-read the hieroglyphs on the wall: ‘The Spell of the Gods’ and beneath that, the warning, ‘Use me wisely, lest I turn and rend thee.’

This ritual was the ultimate. It was life and death. She had to be dedicated and fulsome, lest the warning would apply to her. She replayed every detail of the ritual in her mind before preparing for the trance. The timing was of the essence: according to the proscription of the ritual, it had to be conducted on the night of the round moon and completed by the rise of the sun.

Carefully, she adjusted the aperture on the glow-lamp so the amount of light hovered on the twilight between astral and incarnate. Lying on the bench, she placed the wafer beneath her tongue, relishing the minty bitterness of the hyssop as it suffused her being. Slowly, a mists and vapours of the astral veiled her eyes.

She drifted in and out of consciousness, as her ka eased out of her physical body, until she crossed through the Veil and entered its natural domicile, the huge edifice of the astral light. Immediately, she settled into her familiar astral cloak – the golden lioness. It felt good to be back amongst the warmth of her own kind.

Oh, how she’d missed the freedom of the astral light, where she could fly the universe at the speed of thought and take wing through millions of years in an instant. Through her ka, she looked down on herself, lying on the bench. Would this be the last time she’d ever do so? She banished the thought. For now, she had to be meticulously correct. Her enemies were doubt, fear, and hesitation.

The scene is near the Tower of Babylon. The rains have started. The flood is coming. Everyone is panicking to escape the apocalypse. The heroine Akasha is pregnant, and her friends, Philo, Tros, and Shamira are trying to get her to the safety of the Tower. See the image. Amidst the maelstrom, this happens:

Akasha’s belly hurt. The spasms shot through her, then faded. With Shamira’s help, she waddled along behind Philo. The tower stood implacably ahead. From an enormous circular base, it spiralled into the sky, getting narrower as it got higher. The apex was barely visible amidst the swirling mists and low cloud. In the gathering gloom, the hundreds of people who had taken shelter in the tower had lit glow-lamps, and they cast eerie shadows as they moved about in front of the window openings.

Obsidian clouds scudded in from the east, the horizon seared by constant flashes of lighting. In the distance, a tornado whirled its mayhem. This one seemed more menacing than the others she’d seen. She bit down on her fear.

The wind growled and the rain spat in her face. She wiped the moisture away, like so many tears for a dying epoch. A moment later, she was soaked again. There was no shelter. All around, people were inebriated, swimming on the ecstasy and exasperation of the apocalypse. It had a dull, parlous sound, this end of days: a cacophony of breaking strings, snapping branches and creaking doors. By an unlit alley, she doubled up in agony. As the spasm subsided, she heard people in the darkness of the alley, their grunts of pleasure and groans of ecstasy clearly audible. A couple were pleasuring each other: the dreary evening light the sole cloak to their sad intimacy.

With frantic gestures, Philo pushed the people ahead of him out of the way.

“The way’s blocked again.” His voice was as hard as flint.

They were surrounded by scores of refugees from the Jasmine Gap, as well as drifters, rabble-rousers and lost souls all heading for the last place of possible sanctuary for many leagues around, the Tower of Babylon. Oh, she was so tired. Her baby was feeling her frustrations, an unwilling participant in a static crowd, so near and yet so far from her destination. Tros stood beside her. She felt guilty over his actions.

“I’ll never forget your sacrifice,” she told him.

“Nor will I,” he murmured disconsolately.

Bats flitted through the mists. Dogs bayed at an invisible moon. A cock crowed and then another answered. Birds squawked cries of alarm and cats screeched like demons. An owl cried out overhead. Hordes of frightened, violent people worshipped at the altar of the atrophied old epoch.

None of them had glow lamps. The tenebrous night was closing in on them and with it the storm of the millennium. Hemmed in, her breath shallow, Akasha was suffocating. She wanted to scream. Rain hissed out of the sky. She was drowning in an ocean of fear. Across the way, a turbulent wind gusted around the turret, making an eerie whistling sound. Locked in a weird embrace with the agents of death, they were all waiting for the apocalypse to break over their heads.

“We need to get over there!” Philo shouted, pointing at the tower, now less than a stone’s throw from where they stood, hemmed in by the crowd. For a moment, there was a pause, a hiatus in the chaos. The crowd seemed to sense it too, and quietened. Then a moment later, it was gone, as if it never existed. And people were jostling, shouting and fighting with each other all over again.

It happened again. There was a note, a voice. Singing. No, it couldn’t be. In this morass? The crowd surged behind Akasha and she stumbled. That brought on another spasm. The child was awake, moving around inside her. Tros and Shamira grabbed an elbow each and hauled her upright.

Cloaked in the maelstrom, there was the singing again. Sweet sounds drifted in the air, blown this way and that by the gusting wind and slanting rain. People backed away, and Akasha stepped into a clear open space. The singing originated from near the corner of the tower. The noise and hubbub subsided.

A small gap appeared and through the parting crowd walked a man holding a bright lantern out in front of him. It was Rocor.

His chest rose and fell as he sang. As if in response to a pre-arranged signal, the crowd parted to let him through. A wonderful paean rose up out of the maelstrom. Shamira and Tros joined the singing. Slowly, the crowd joined in with the singers and the joy of their voices extinguished the fear in their eyes. Amidst the rain, the drunks, the despair, and the hopelessness, people raised their voices in the words of the hymn, incense to the Source. Those in the tower hung out of the windows and sang into the rain.

This unexpected transformation banished Akasha’s pangs of doubt. In the midst of a spiritual vacuum, one man had restored her faith in humanity. Faced with an ugly apocalypse, she was dimly aware of witnessing something divine. She was not alone. That night in Babylon, all were equal in the eyes of men; they were always equal in eyes of the Source. 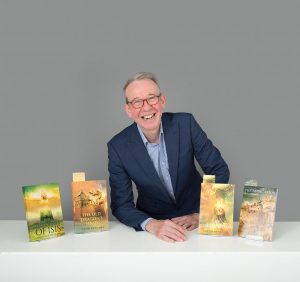 Justin Newland is an author of historical fantasy and secret history thrillers – that’s history with a supernatural twist. His stories feature known events and real people from history which are re-told and examined through the lens of the supernatural. He gives author talks and is a regular contributor to BBC Radio Bristol’s Thought for the Day. He lives with his partner in plain sight of the Mendip Hills in Somerset, England.

Justin Newland will be awarding one signed copy of the paperback (US or International) to a randomly drawn winner via rafflecopter during the tour.