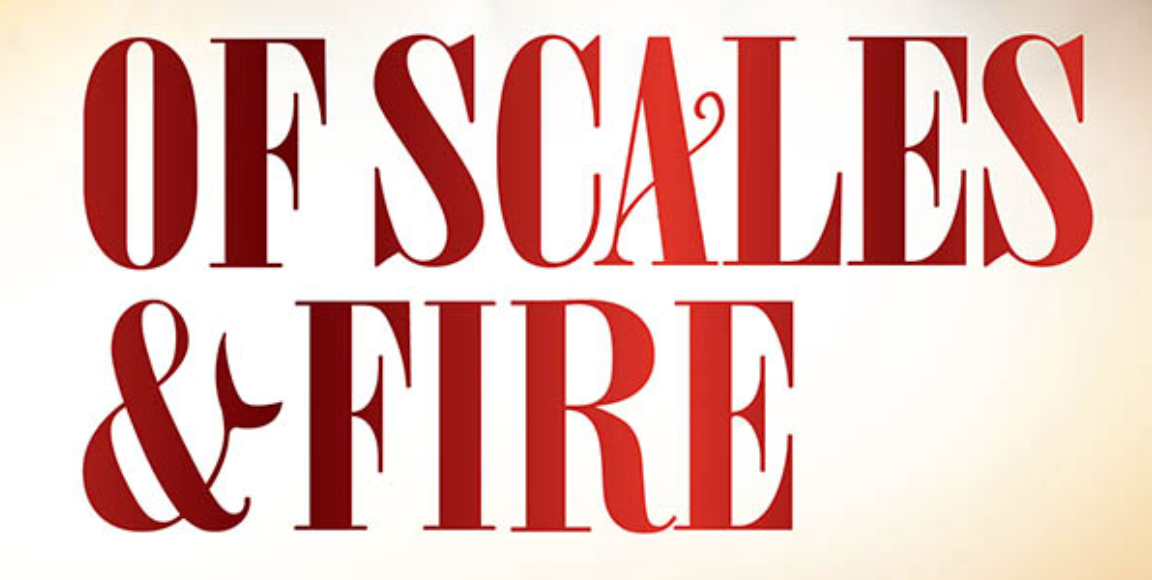 Book Title: A Leap of Faith

An evocative tale of love, fear and duty, set against the backdrop of the nineteen fifties, with the emergence of apartheid in South Africa and the criminal nature of homosexuality in the UK.

​South Africa, 1953 – Father Daniel Blakemore is happy on his missionary secondment in a small, rural Providence Hospital on the Eastern Cape. Being away from England makes it easier for him to conceal his homosexuality – a secret that would destroy everything he’s ever worked for.

But when Doctor Eddie Raleigh takes up his new position at Providence, the two men are instantly drawn to one another. Their liaison represents both Daniel’s deepest desire and his worst nightmare. If the archdeacon in London learns of his true nature, Daniel’s life in the church will be over.

Broken-hearted, Daniel breaks things off with Eddie. And to get away from his sorrows, he leaves his beloved missionary work behind, and returns to Stepney.

Will time and distance alleviate Daniel’s pain, or will happiness be forever elusive? Or will love, finally, find a way?

Doctor Eddie Raleigh and I met for the first time on an unusually hot day in January. At the time, my head was inside the end of a VW bus, and my arms and shirt were covered in motor oil. The bus, which doubled as our ambulance, had sat uselessly in the hospital’s courtyard for weeks, and I was determined to do something about it.

“I can’t see what the problem is.” I wiped my brow with an oily sleeve. “That bolt’s tight, but this pipe is still dripping… Anton, hand me the other wrench?”

Without taking my eyes off the engine, I stretched out a hand in the direction of the half a dozen boys who were watching my futile attempt at vehicle repairs with great interest and many unhelpful comments. When the tool wasn’t forthcoming, I glanced up. All I could see of the boys were their narrow backs, clad in an array of cast-off shirts. They were looking at something I couldn’t see.

I straightened, narrowly missing cracking my head on the open engine hatch.

A stranger stood at the front of the bus, holding a small leather suitcase in one hand and a white trilby hat in the other. He was tall and slender, with a shock of reddish hair that brushed the collar of his tailored shirt. He was in shirtsleeves; a summer coat hung in limp folds over the suitcase. He gave an impression of the slightly rumpled elegance seen in the well-to-do traveller.

The boys remained still as salt pillars, so I took charge. “Hello there. Can we help?”

He approached, looking relieved about the friendly break of the stand-off. Close up, a fine spray of freckles dotting his nose and cheeks captured my attention. He had high cheekbones, and laughter lines around the eyes. His jade-green gaze gave me a sudden jolt, like I’d missed a step while hurrying down a flight of stairs. He smiled, his face lighting up with an openness that was rare and refreshing. The way his mouth quirked at one corner made my cheeks burn.

“Do you need assistance?” I attributed the uncharacteristic edge in my voice to the forward way his gaze still held mine fast. Instantly, anxiety washed over me. Did he think me rude? But his smile was unwavering.

“I’m Edward Raleigh.” His voice was low and pleasant. “The new doctor.” He extended his hand. At the last moment I remembered the engine grease on my fingers. I grimaced, holding my arm rigidly by my side.

“You don’t want to get grease all over you.” In lieu of a handshake I put all the warmth I had into the words. “How do you do. I’m Father Daniel Blakemore. Welcome to Providence Hospital, Doctor Raleigh. We’re very glad to have you on board.”

“It’s good to be here at last.” From his tone, it wasn’t difficult to deduce the relief of a journey finally completed. He smiled that bright smile again. “And to be so promptly appreciated.”

“You’ll want to see Mr Hogarth.” That was the hospital’s director and head surgeon. I sized up the boys. “Anton, take Doctor Raleigh to the administrative offices.”

“Thank you, Father.” Raleigh’s smile was just for me this time. Until he turned to Anton, at least. “Ready when you are.”

The boy looked proud to be entrusted with this important task. “This way.” He set off towards the hospital, his back straight, his eyes twinkling with curiosity. I tried to see the white, two-storey building with its gabled red roof through the eyes of the elegant doctor. Hopefully, Raleigh would be too busy digesting his unfamiliar surroundings to notice the cracks in the walls and the peeling paint.

“Clinic’s just finished for the day.” Anton’s voice carried from halfway across the deserted courtyard. He seemed to be responding to a question from Raleigh. “Don’t get used to the quiet. It doesn’t last.”

Something in the doctor’s response made Anton grin. He hurried to hold the door to the Casualty department and let Raleigh precede him. A smile stole onto my face. Despite his elegance, I had an inkling that Raleigh would fit right in.

“The new doctor is very tall.”

I turned my attention to the boys still crowding around the bus. The speaker, a small, wiry lad of about ten, grinned at me.

I chuckled. “So he is.” Turning back to the engine with its intractable tangle of wires and pipes, I gave a sigh. “Gentlemen, back to it. Someone hand me the flat-blade screwdriver, please.”

Mel Gough has self-published eight contemporary and historical romance novels and novellas. She was shortlisted for the inaugural Selfies Award with her romantic suspense novel He is Mine. A Leap of Faith was longlisted for the Bridport Award 2019 and shortlisted for the First Novel Award in the same year. Mel lives in London. 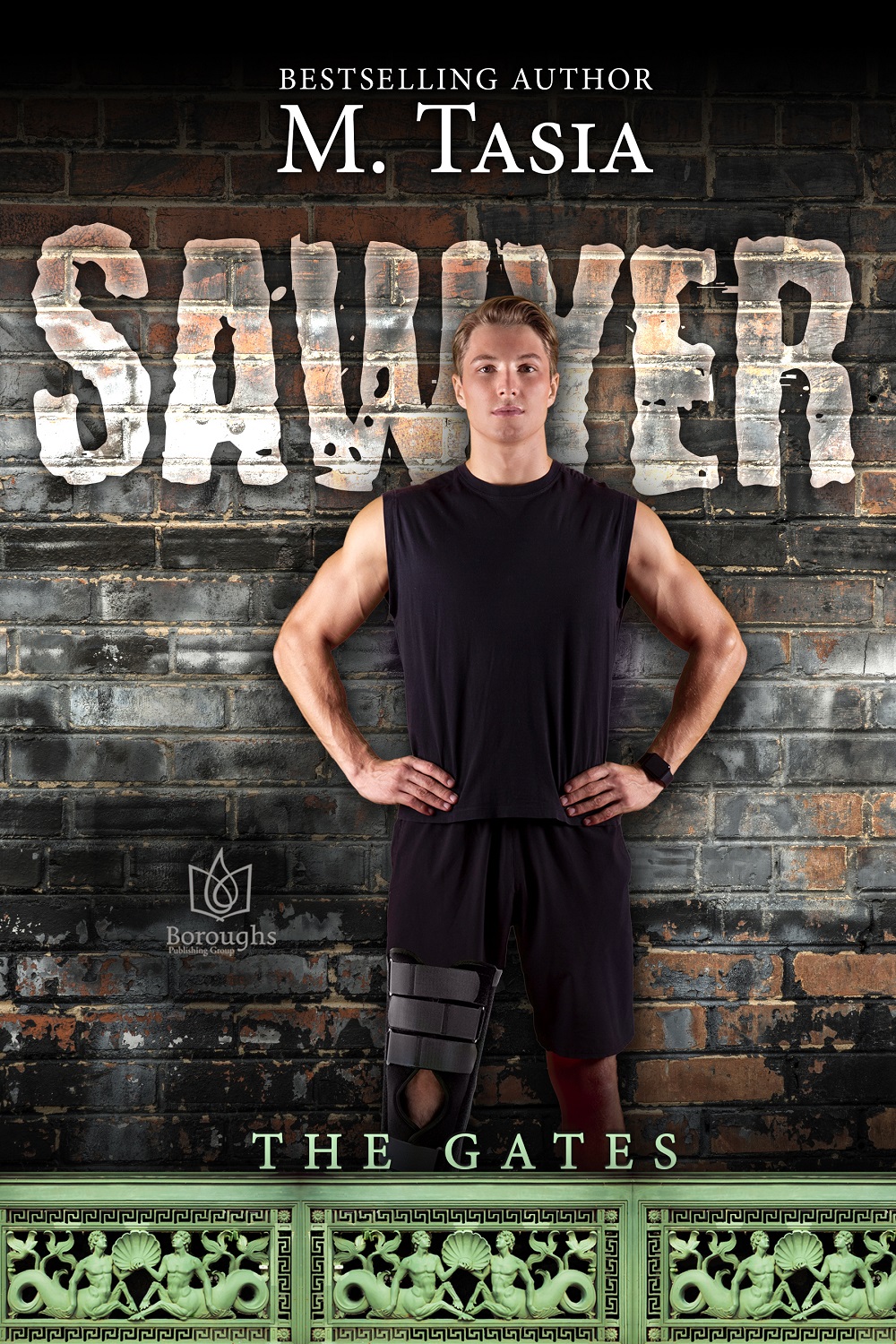 When Sawyer Hudson has a run-in with the mercurial executive chef at The Gates where Sawyer works as a dishwasher, he’s certain he’s going to lose his job. For anyone that would be horrible. For Sawyer it’s a death sentence for the person he loves most in the world: his disabled brother.

Award-winning world-renowned executive chef, Alexander Larsen, has time for his kitchen, his culinary creations, and little else. As a member of a family known for its wealth and philanthropy, Alexander enjoys privelge few can imagine.

Living at the extremes of the life situation spectrum, Sawyer and Alexander find themselves thrown together in a series of events that bring the men closer in unexpected ways, and opposite attract becomes the understatement of the year.

Not everyone is happy about the burgeoning love affair, but these two men have found something neither ever expected, and to hell with anyone who tries to keep them apart. 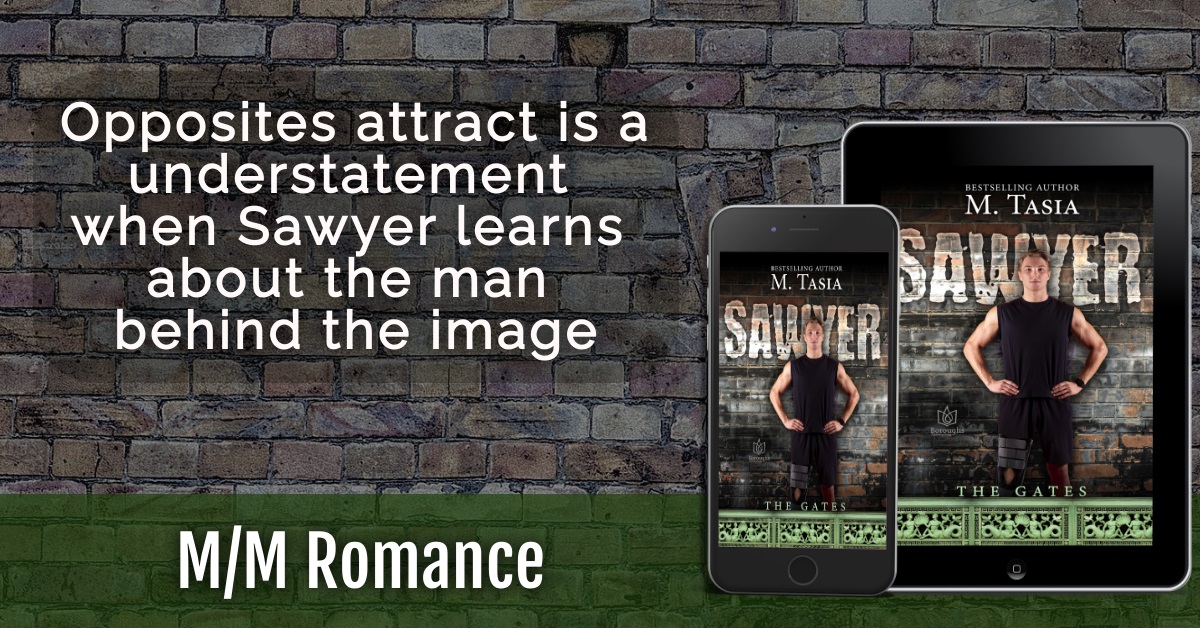 Books in The Gates Series:

M. Tasia is a M/M romance author who lives in Ontario, Canada. She’s is a dedicated people watcher, lover of romance novels, 80’s rock, and happily-ever-afters (once the MCs are put through their paces, of course), who grew up with a love of reading. She’s a firm believer that everyone deserves to have love, excitement, and crazy hot romance in their lives. Love should be celebrated and shared.