I am so excited that HOLIDAY IN HIDING by Lily Michaels is available now and that I get to share the news! If you haven’t yet heard about this wonderful book, be sure to check out all the details below.

This blitz also includes a giveaway for a self-care box courtesy of Lily & Rockstar Book Tours. So if you’d like a chance to win, check out the giveaway info below. 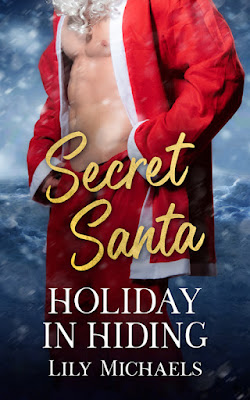 Hiding from his past may wind up leading Liam to the merriest Christmas of his life.

Constantly looking over his shoulder has become Liam Carlson’ s norm after five years in witness protection. Living with his new identity has come with a major downgrade in lifestyle and a lack of any meaningful connections. But when he loses his minimum-wage job and the rundown apartment he called home, he finds himself in the middle of a Texas state park waiting for the marshal in charge of his case to help with relocation. A sudden, ferocious storm destroys many of his belongings, including the tent that offered him some protection, but it also heralds in a sexy-as-hell park ranger, Jax Gallagher, who taunts Liam’ s long-neglected libido.

Jax and his wife, Megan, have had an unconventional relationship from the beginning, with a military romance that blossomed into marriage. Their mutual desire to share their love with a third member resulted in several blissful years with another man that ended when they left the service and took on civilian careers. An unexpected visitor in the form of a drenched Liam is the first glimmer of hope since then that they can reclaim the happily-ever-after they thought they’ d lost. Their attraction grows with every second they spend together. While they become closer, another lifesaving rescue also manages to open the door to a career Liam never fathomed.

But the truth of the criminal world Liam grew up in threatens to destroy the still-tenuous bond the three are forming and the bright future Liam never believed possible.

A perfect circle of cold steel penetrated through my thin cotton dress shirt. I closed my eyes, took a deep breath, and fought to keep my hands from shaking. They’d found me…again. It was only a matter of time. I’d known that.

“Don’t move.” The gravelly voice behind me uttered the completely expected command.

I rolled my eyes toward the inky sky, barely noticing the full spectrum of stars. “Exactly how predictable are we going here, Joe? Full-on cartoon villain or just generic mobster? I want to make sure I keep my expectations realistic.”

A laugh, roughened undoubtedly by decades of smoking, was the response. “Name ain’t Joe, but I know exactly who you are, Nathaniel Cogliano.”

“Left off the middle name there, Joe. That’s how you really strike fear into the
hearts of your prey. Take a tip from my ma, since she’s the one paying you to be here.” I sucked in a lungful of air. “And I call all you guys Joe. No need to learn your name, since you pass through soon enough.”

The barrel pressed harder into my back and the man behind me growled. “You think you’re something special? I’ll have you back to the boss man, collect my money and send your ass to the bottom of the river before breakfast.”

That was the moment I knew I could smile. The banter had bought me enough time to center myself and call my nerves under control—a sad fact for ole Joe. I was exactly the protégé my mother had always hoped I’d be. “The river? Really? Can’t we do something just a little more creative? Maybe a warehouse in midtown or a cabin somewhere upstate that you set on fire to cover the evidence? Work with me here, Joe. Bring something to the table so I remember who the fuck you are five years from now.”

“I’m about done with your ‘Joe’ bullshit, and you ain’t gonna live to see another day, much less another year.”

My grin widened. Irritating the latest thug who’d been hired to kill me was almost too easy. Getting the other man frustrated and off his game was the first step to controlling the situation. “Give me your real name or give me a reason to remember you—otherwise I’m just gonna keep calling you Joe, right up until I don’t need to call you anything anymore.”

I wished to every higher being I knew that I could see the man’s face. It was certain to be mottled and reddened from frustration. Fucking with these guys—the ones who were always hiding in the shadows waiting to deliver me into the hands that would destroy me—was one of the few pleasures I could find in my world these days.

Even a night at a strip club didn’t hold the same allure as it once had, which was a damn shame. But surgically enhanced tits shoved in my face weren’t enough to hold my attention when I was looking over my shoulder, literally and metaphorically.

The goon pushed the metal deeper against my spine and I counted to three in my head. As soon as my internal voice whispered, ‘one’, I spun around, grabbing the man’s wrist and twisting it behind his back until he let out a piercing scream and the firearm clattered against the pavement. I might be trying to claw my way out of the life of crime I’d been born into and live a more normal, law-abiding life, but the insidious part of my soul relished his painful cry.

The dark beast within me threatened to trample over all my good intentions, and a list of ways to break the hitman now kneeling before me in agony trickled through my mind. I tightened my hold on his arm just a fraction more and wrenched it back a little higher before I pulled my phone from my back pocket with my free hand and hit the number one contact on my speed dial.

Another anguished scream tore from the man’s mouth before I could utter a greeting. “Quiet, Joe. This is important business.”

“Fuck, Nate, what the hell did you get yourself into this time? You’re supposed to be lying low until the trial.” Deputy Xavier Brower’s frustrated and exhausted voice echoed across the line and managed to irritate my nerves that were still pulsing with adrenaline at the latest attempt on  my life.

The nearly animalistic howls ramped up another octave, and I sighed. He was going to wind up attracting a hell of a lot of attention that I wasn’t in the mood to deal with. I released his wrist, brought my knee up to his face and slammed it into his nose. Once he was flat on his back, I lowered my hand in a perfect slice against his carotid artery and he passed out before I’d even straightened my stance, grabbing my phone from the ground where it had fallen in the brief mêlée.

“Still there, Deputy X?” Although the assault had been brief, the events leading up to it combined with the actions to make my breathing slightly labored. It had been a long-ass time since I’d done any hand-to-hand combat, either in training or out in the world. I was clearly getting too soft.

An annoyed exhale was his first response, punctuated by a weighted silence. “Yeah, I’m here. Send your location and restrain the guy. If you’re going to live long enough to testify against your mother and her crew then we are going to have to hide you away.”

They were words I’d known were coming for a long time, but I’d deluded myself into believing I wouldn’t have to hear them until after the trial came, right on the heels of that statement. “Pack your bags, Nate. You’re going into witness protection.” 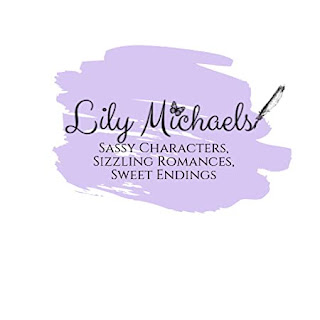 A medical professional by day and writer by night, Lily is a huge believer in love being available for everyone. Her novels always include an over the top happily every after for her characters.

1 winner will receive a a mystery gift box of self-care items perfect for a “book date night, US Only. 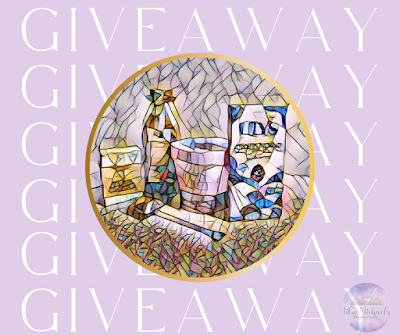 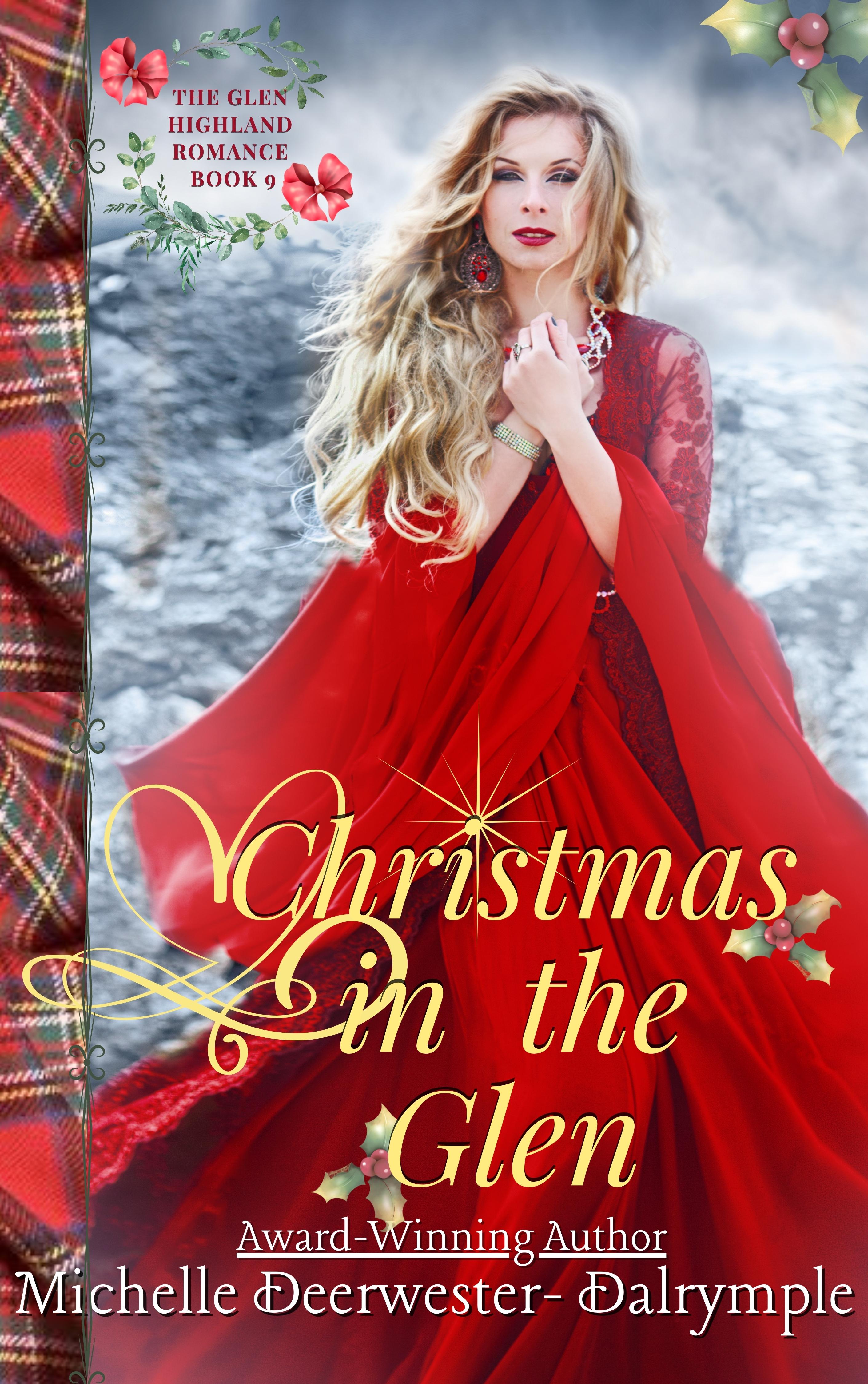 Christmas in the Glen

Dawn has not bothered searching a man worthy of being a husband, until the day someone tries to win her heart in the most mysterious way . . .

When mysterious gift appears outside the kitchen door at Broch Invershin at the start of Yuletide, Dawn Fraser cannot pass it by without investigating. It is then followed by a string of gifts, all for Dawn, and gifted by someone who knows all her preferences.

The giver must be someone who knows her well. Could it be the rakish and handsome Drummond? They had been sharing glances and secret kisses. Might he be Dawn’s admirer?

Yet Drummond seems oblivious to any gifts that have set the kitchen maids into a tizzy. And Dawn is mystified as to who her benefactor might be, until a mind-spinning Hogmanay celebration where a masked man shares a dance, and a passionate kiss, with her.

A man who is definitely not Drummond!

When she does learn her admirer’s identity, she also learns the depth of his love and desire.

Will Dawn be able to open her heart to this mystery man? Or will Drummond stand in their way? 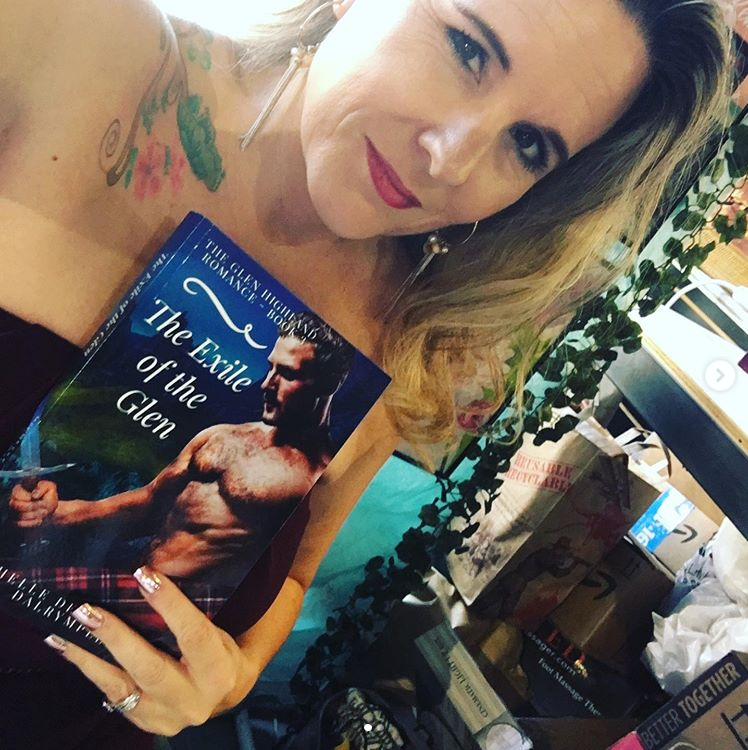 Michelle is a writer and college professor. She lives in California with her family. 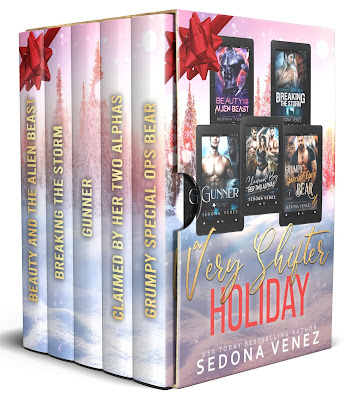 Lots of shifters in EVERY standalone book! Included:

In the wilderness, love knows no bounds.

Bear-shifter Fergus is an alpha who specializes in the art of war. With danger lurking around every tree, it is his desire to capture the leader of a renegade wolf-shifter pack that drives him.

Until temptation arrives in the form of the captivating, feisty human Trinity.

BEAUTY AND THE ALIEN BEAST

After being abducted from Earth by alien slavers, Ella is rescued by a hot alien warrior who flees with her into the hostile wilderness of his home planet. While he seems to want to protect her, the inability to communicate with her savior leaves Ella uncertain about where they stand and how she will manage to get home.

Stormy lived her life in fear of falling in love. For the women in her family, it’s a death sentence for whoever holds their heart. Then, she met Knox.

Is the love between this bad boy rockstar and his curvy witch powerful enough to break her family’s dark curse?

When Gunner returns home from war, he discovers that he can’t go back to the way things were. He now carries a dark secret that threatens to consume him, and if he doesn’t learn to control his inner beast, it will destroy any chance of happiness.

Two gorgeous bear shifters, and one woman who gave up on the idea of true love a long time ago… 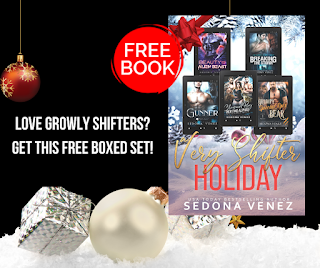 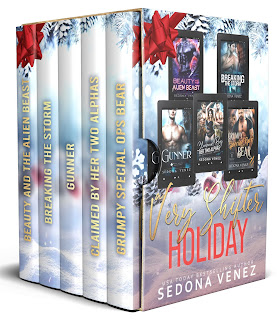