This post is part of a virtual book tour organized by Goddess Fish Promotions. Thomas Grant Bruso will be awarding a $10 Amazon or B&N Gift Card to a randomly drawn winner via rafflecopter during the tour. 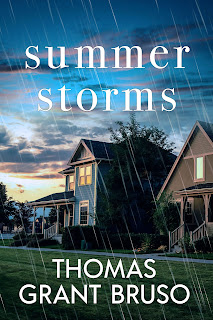 Sixteen-year-old Earl Layman is going stir-crazy. Secluded with the flu inside the four walls of his home and only the escape of his video games to help him through, Earl is struggling to keep his sanity.

That is until he notices the boy next door, seventeen-year-old Rex Chambers, raking leaves in the adjacent yard.

Earl’s summer is about to change. Before another torrential rainstorm hits the small upstate New York town of Betham County, they meet during an awkward cell phone exchange. As they start to connect through occasional texts, Earl and Rex enter the throes of adolescent lust.

In the early stages of forging a lasting connection, their family situations threaten to destroy all they are working for.

Earl was a funny name for a sixteen-year-old boy. It reminded Earl of an older man, like his late uncle Fred who died when Earl was two years old.

As he stared down at a photo album spread open across his lap, the pictures of his uncle Fred and family reminded him of a conversation he’d had with his mother years before about death and dying.

Earl ran a finger over a photo of his uncle smiling back at him from beneath the glossy sheet of paper: white buck teeth, dark-brown eyes, thinning blond widow’s peak, and a handlebar moustache. Earl had pulled the album out of storage when memories of his life in Jessup, New York, resurfaced while he was sick from school this week. He flipped through scads of photos, faces from yesteryear, as he wiped his moist eyes with the back of his hand, reminiscing.

The idea to trek down memory lane came clear to Earl when he’d had a silent, reflective moment about his own life—his purpose, and who he was.

Six years ago when his family was living in a tiny, two-bedroom duplex in the small town of Jessup, before they moved to Betham County, Earl and his mother had a long conversation about life and death. Earl asked the most obvious question: “Why does everybody have to die?”

“Even the good guys like Uncle Fred die,” she’d said.

The conversation with his mother had been triggered by his finding their cat, Shells, unresponsive, just after he’d stumbled out of bed early one morning to use the bathroom. Shells was lying on the floor, curled up in a corner. Earl crouched next to her and ran his hand through her soft black-and-white fur. She did not move, so Earl yelled for his parents. He recalled the sad expressions on their faces when they came running to him.

Earl cried when he and his father had to bury Shells in the backyard, a fragment of memories now many miles behind them. Earl had sat with his mother that morning as she answered his questions, the importance of death, and the grief that comes with losing life’s precious things.

“Like Uncle Fred and Shells,” she’d said, “everything and everybody has a purpose. That’s why it’s important to love and care for everyone and everything, people and animals, every day. It’s sad to lose a pet or a family member, but it’s also natural and part of life.”

“Are you and Dad going to die like Uncle Fred and Shells?”

His mother’s hug, the safety of her warm embrace, made Earl happy. After saying goodbye to Uncle Fred and Shells, Earl never wanted to let go of his parents. They were all he had.

In another life, he was a freelance writer and wrote for magazines and newspapers. In college, he was a winner of the Hermon H. Doh Sonnet Competition. Now, he writes book reviews for his hometown newspaper, The Press-Republican.