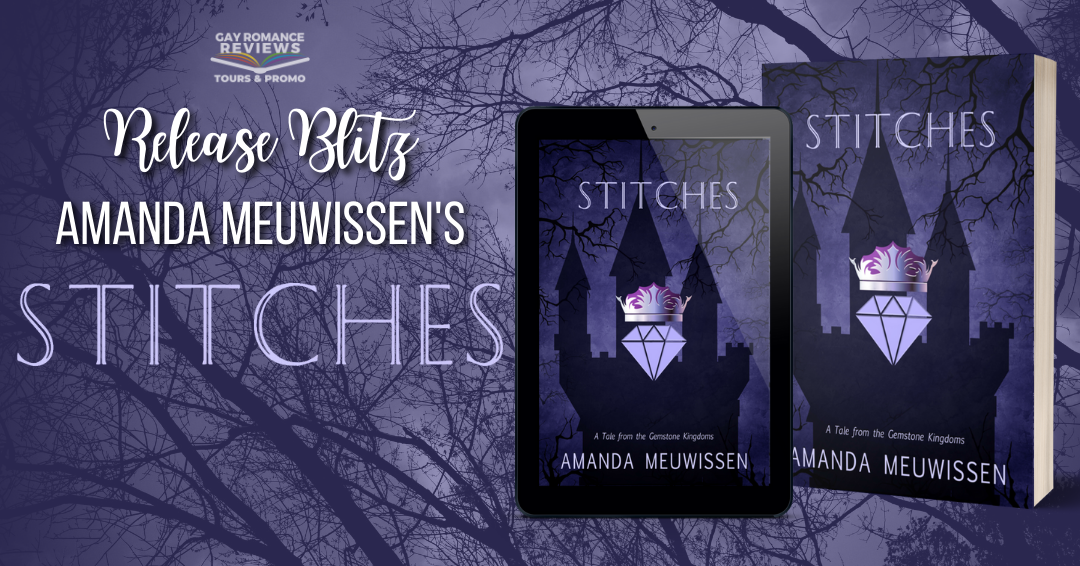 Tales from the Gemstone Kingdoms, Book 2

Created by the alchemist Braxton, Levi was “born” fully grown and spends his early days learning about the monster-filled kingdom he calls home.

Even though he is just a construct pieced together from cloned parts, Levi longs to fit in with his mythical neighbors, but more than that, he wishes he could say two words to the Shadow King without stuttering.

Ashmedai has been king of what was once the Amethyst Kingdom since it was cursed a thousand years ago. Only he and Braxton know what truly happened the night of the curse, and Ash’s secret makes walking among his beloved people painful, so he rarely leaves his castle. However, with Festival Day approaching, Ash wouldn’t mind going out more often… if it means seeing more of Levi.

Ash wishes he deserved the longing looks from those strangely familiar violet eyes. He knows no one could love him after learning the truth of the curse. But if anyone can change his mind, it is the sweetly stitched young man who looks at him like he hung the moon.

“Ash!” Klarent proclaimed. “We were just talking about you.”

Levi’s eyes snapped to the man who had entered.

Every time Levi saw him, it was as if his stitched-together limbs were about to unravel, and he felt both unable to move and as if he might collapse to the ground in pieces at any moment.

The king was just so beautiful. Levi didn’t even know if he understood beauty, but to him, Ashmedai was it.

His skin was white as bone, his hair long, straight, and ebony black, with black in place of the whites of his eyes, white irises, long nails, almost like claws, all his teeth razor-sharp, and pointier ears than Levi’s subtle tips, like Levi had read about elves.

Like Daedlys, Ashmedai wore all black, but with stitching and accents in red and gold. He looked so royal, with a brocade tunic and long cloak. He wore no crown, but when he moved, the shadows moved with him, as if drawn to his regal presence.

“Daedlys, my friend, Dreya pointed out that my sword belt is in need of mending, possibly replacement, before next week’s hunt. What do you recommend? And what’s this about talking about me?” He turned with a mildly amused smile toward Klarent.

Ashmedai’s voice was deep and penetrating, so much so that Levi could feel it rumble through his chest. Ashmedai was king and not often seen around town, yet he acted toward his people as if they were all the same station, allowing anyone who wished it to call him “Ash” and consider him friend. From what Levi had been told, Ashmedai had always been that way, since the start of the curse, when the once Amethyst Kingdom’s prince brought calamity upon the people and Ashmedai became king in his stead to save them.

He didn’t float like the others but carried such a commanding presence in his steps, Levi’s breath was lost again and again while looking at him.

The white-on-black eyes Levi was staring at suddenly turned toward him, likely having felt the weight of his gaze, and all at once, Levi could move again—because he had to.

“Th-thank you, Sir Daedlys,” Levi stuttered, half muffled by the fabric of his hood. His feet reacted before he’d consciously considered running, because the panic of being perceived by the king made him desperate to get out from under those eyes.

“Hang on, Stitches, have you met—”

“Another time!” Levi all but shrieked, ducking his head to scurry from the shop, and then just as quickly fled from the market.

To celebrate Amanda’s new release, we are giving you a chance to win 1 of  2 e-copies of Stitches!

Amanda Meuwissen is a bisexual author with a primary focus on M/M romance. As the author of LGBT Fantasy #1 Best Seller, Coming Up for Air, paranormal romance trilogy, The Incubus Saga, and several other titles through various publishers, Amanda regularly attends local comic conventions for fun and to meet with fans, where she will often be seen in costume as one of her favorite fictional characters. She lives in Minneapolis, Minnesota, with her husband, John, and their cat, Helga.