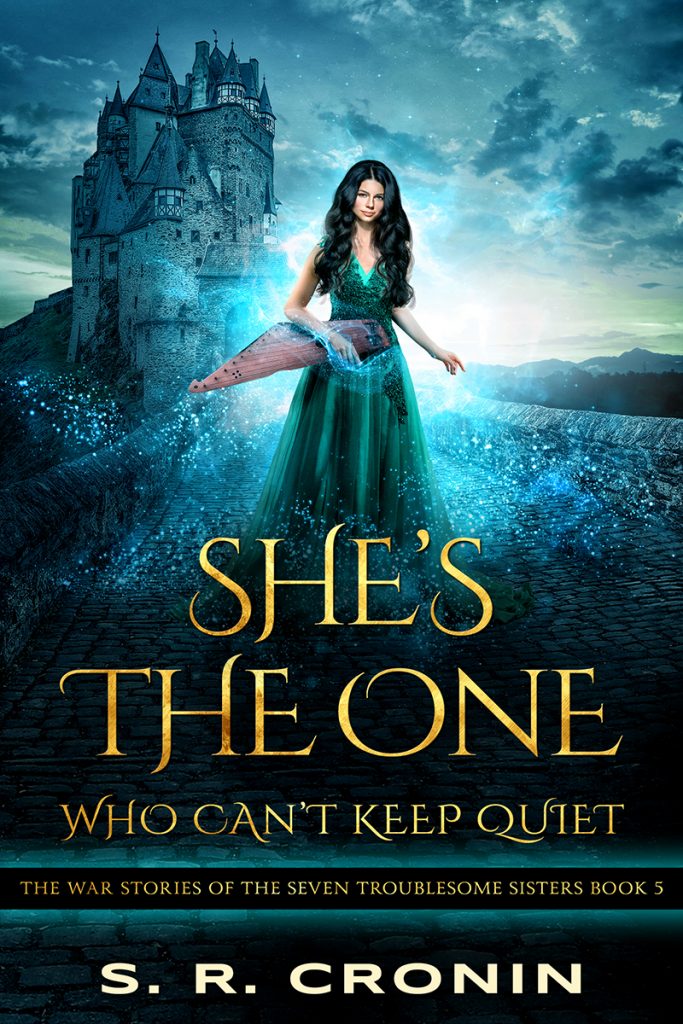 Celestine, the fifth of seven sisters, is tired of hearing about hers. Father thinks she’s frivolous because she likes pretty clothes and caters to the crowds in the taverns who adore her music. Mother thinks that because she’s the most social daughter in the family, she can’t keep quiet about anything.

They’re both wrong. Celestine hides a secret she has kept for most of her life.

As the family beauty and a talented musician with a lyrical voice, she has the best prospects for marriage to a prince. When such a liaison never happens, people assume Celestine is too choosy. But even in somewhat tolerant Ilari, a daughter hates to disappoint her family. How can she tell them she’s in love with a princess instead?

Lucky for Celestine, all her sisters are obsessed with an invading army headed to their realm. Celestine would rather ignore the threat and enjoy the freedom their lack of attention gives her. But, her voice can unlock a power that may help save Ilari. And the woman she loves is determined to fight these invaders. And her family, for all their talents, seems clueless about how to motivate the masses.

Celestine knows she can inspire the citizens of Ilari to do what needs to be done. Is it time to put her inhibitions aside and use her voice to save those she cares about?

The Good Fortunes stood on stage, ready to perform on the eve of Noruz. People filled the large tavern, their happy faces eager to hear us. None of the lookouts I’d recruited had seen Ura anywhere nearby.

I felt better than I had in anks. A phenomenal woman, perhaps a princess, had chosen me to confide in. To be with. To love.

My fellow musicians picked up on my good mood, and our music started out strong. Zamarran banged on his largest drum and Feene’s fingers flew over the strings of his cittern, which had become his instrument of choice for most songs. He and I harmonized as Mirva wove her most intricate of melodies through it all.

Then one of the lookouts I’d hired ran through the side door and onto the stage.

“You need to leave now. The Mongols are here. The invasion has started!”

People in the crowd began to yell.

“We’re as safe here as anywhere,” Zamarran said as the crowd forced its way out through the two narrow doors. “Let’s stay put.”

“How did this happen? How could we not have known?” I asked the others. “Don’t we have scouts ready to send messages if something is seen?”

After the hall emptied and nothing more happened, we made our way outside to get some answers. Frightened people filled the street, heading in different directions. Some begged others for help. A few looted the abandoned merchants’ stands. The only thing missing from the chaos was an actual Mongol.

“Where are they?” I asked a man walking past us.

“In Pilk Center,” he said. “Ten of them are outside the offices of the Ruling Prince of Pilk.”

Zamarran and I looked at each other.

“Want to go back inside and practice?” I asked.

“Might as well,” he agreed. “It’s a big empty hall and a shame to waste the space.”

Sherrie Cronin writes stories about people achieving the astonishing by developing abilities they barely knew they had. She’s made a lot of stops along the way to telling these tells — living in seven cities, visiting forty-six countries, and working as a waitress, technical writer, and geophysicist. She’s lost too many beloved cats to mention, but has acquired a husband and three children who are all doing fine, despite how odd she is.

Today she lives in the mountains of Western North Carolina where she writes, answers a hotline, and occasionally checks her phone for a message from Captain Picard. She still hopes to get the chance to pursue her remaining dream in life and become Chief Science Officer on the Starship Enterprise.

Enter to win a $20 Amazon/BN GC – a Rafflecopter giveaway

10 Replies to “Spotlight & Excerpt: She’s the One Who Can’t Keep Quiet + Giveaway”