I’m pleased to share Shadow Winged, the first book in The Shadow Winged Chronicles with all of you today! Now available on Amazon!

Being a bush pilot is the third most dangerous job in the world. Piper Tikaani takes that in stride. As an Inupiaq shapeshifter, flying is second nature, whether under her own power, or tackling the skies in her Super Cub.

Strong winds, rugged terrain, and rough clients, were all the excitement she had room for until a mysterious death and hidden treasure led Piper to a new and dark reality. One where the people she trusts hide things from her, and ancient beasts stalk the land.

If you like unique Urban Fantasy based on Native American mythology along the lines of Patricia Briggs, CE Murphy, and Faith Hunter, you’ll love this new series!

The rugged cliffs of the Alaska Range darkened as the clouds pressed from above.  I decreased my air speed and descended another hundred feet, hugging the right side of the steep mountain and giving myself room in case I had to turn around in the narrow pass and go back to Anchorage. We were close enough to the side of the mountain to observe a band of grizzlies under my right wing.  Most of the animals cringed when we buzzed past, but a huge boar looked up, challenging us.  My client barked out a quick laugh.

I’d already sunk four hundred feet on my way through the pass, and we flew along at an altitude of eight hundred. The lowering ceiling kept forcing us down as I raced an incoming front. I cleared the pass and zoomed out over open ground, trees, and tundra.

Suddenly, a black cloud materialized in front of me.  I slowed further, trying to dip below. As I grew closer, I realized it was a cloud of dark birds.  My heart sped up.  I dipped my right wing to avoid them, but they moved almost as if they were trying to hit me.

I increased the dip further, and accidentally stalled the wing–losing lift.  We dropped fast. My passenger gasped loudly.  I grimaced; teeth clenched with concentration.  After some quick maneuvering, I recovered from the stall, sweat running down my back.

plane. “Shit!” I yelled as I dove further to avoid the rest.  We were down to three hundred feet.  The clouds were still pressing on us, and I was worried about the damage the birds may have done to the cloth covered Super Cub.

“We’re going to have to land.” I straightened out and started to look for somewhere to put down.  “I need to assess the damage.”

He grunted affirmatively.   Rough maneuvering like that can leave your passengers a bit green, so I hoped he was doing well and wouldn’t spray my cockpit with vomit.

Luckily, we were over a river and even though it seemed to be running higher than usual, there had to be a gravel or sand bar somewhere big enough to land a good bush plane on.  The Cub bounced and swayed in the strong wind, and the sky continued to threaten as I located a potential landing spot on a gravel bar.

A quick glance back showed my passenger’s white knuckles clinging to the back of my seat. I buzzed the gravel bar, twice, mentally checking the length, and circled back to land. I came in at an angle, fighting the crosswind and straightened at the last second to avoid the possibility of the wind flipping us. I could smell the sharp, quick scent of fear. Mine and the stranger’s. It filled the plane as the sudden deceleration pushed us into the seat belts.

The Super Cub is the workhorse of the bush.  It’s small, likes to fly, carries a good load, and can take-off and land in a very short distance. This was a very short distance.  I dragged my oversized Bushwheels through the water slowing the plane and bounced gently down the makeshift runway.  I turned and maneuvered it for a quick take-off before I powered down.

“You doing okay back there?” I only got another affirmative grunt.

“You might as well stretch your legs; I know it gets a bit cramped back there.” I pulled off my headset and opened the door.

“That was some pretty good flying,” his voice was husky and deep and rumbled from his chest.

“It shouldn’t have had to have been,” I shrugged. “It’s like they came out of nowhere,” I scowled up at the darkened sky.  “It’s weird.  Ravens are too smart to hit a plane,” I spoke quietly, mostly to myself.

I didn’t let on about it freaking me out.  Ravens are a personal animal for me. Hitting them made me feel slightly nauseous and unbalanced. I helped him remove the bags and gear that were pinning him down and he stepped out.

A quick chill raised the hair on my neck and peppered me with gooseflesh. I looked around to see if anyone besides my passenger was around.  No one.  I brushed off the feeling. How dumb, by worrying about the ravens I’d spooked myself!

I frowned slightly at my passenger, trying to remember his name.  He had a bemused smile on his face.  He pushed his hat back a little and took off his sunglasses.  His bright blue eyes immediately drew me in.  Wow.  He hadn’t looked more than average at first glance, but those eyes were something.  I looked away quickly.

He took a deep breath of the cool, clean air, and looked around.  “I can see how this country can get under your skin,” he said.  “Can I help you with anything?” he added after turning back to me.

“Thanks, uh, Vanice?” I stumbled through the name. I thought that was it. I hoped I got it right.  I thought for a moment longer, no, that’s right, Vanice Fletcher, but he had some kind of nickname. He flinched; I should have paid closer attention to dad when we were loading up.

“Call, me Fletch or Fletcher,” he said.  “Vanice was my grandfather.”

“Okay, sorry, I’m Piper, by the way, like my airplane. It’s a Piper Super Cub. Only I’m Piper Tikaani. I was a little distracted before. I don’t remember if I told you my name.”  I was babbling. I shut my mouth, held out my hand and we shook. “I’m good, with the plane, I mean.  Why don’t you have a look around while I check it over?  Just keep an eye out for bears.” 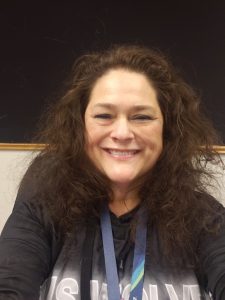 Jilleen Dolbeare is the author of the Shadow Winged Chronicles, an urban fantasy series about a shape-shifting bush pilot in Alaska.

She started her love of reading at the age of two. She was an experiment by a father who was starting his career as a teacher. She gained her love of science fiction and fantasy in middle school by reading The Prydain Chronicles by Lloyd Alexander, The Dark is Rising by Susan Cooper, The Enchantress From the Stars by Sylvia Engdahl, and The Dragonriders of Pern by Anne McCaffrey among others.

She discovered her deep love of urban fantasy after reading Steven Spruill’s Rulers of Darkness, and her love of writing while finishing her English composite (English and Literature) degree at Brigham Young University.

Jilleen lives with her husband and two cats in Barrow, Alaska where she also discovered her love and admiration of the Inupiaq people and their folklore.