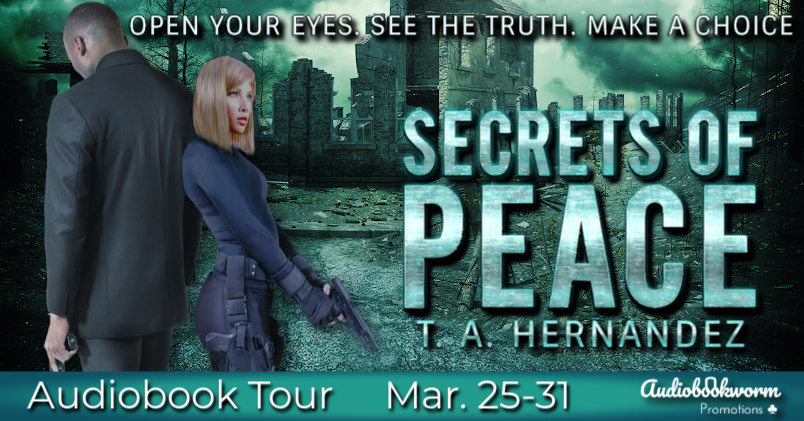 Open your eyes. See the truth. Make a choice.

Nearly 30 years ago, the PEACE Project rose from the ruins of a global war to take power over a new America. Providing stability in exchange for absolute authority, the project controls every aspect of citizens’ lives through each of its five units – Protect. Enforce. Advance. Control. Eliminate.

Raised in the Project since infancy, 18-year-old Zira has been trained as an assassin under the stern guidance of unit E-2’s Chairman Ryku. After she makes a careless mistake on an assignment, the chairman partners her with Jared, the best operative in her unit. Their partnership transforms into friendship as they work together and learn to rely on each other.

But when misinformation causes a solo mission to backfire, Zira’s deepest loyalties and strongest relationships are tested in a place where even a hint of doubt can be perceived as treason. The life she knows is falling apart, and nothing will ever look the same again.

T.A. Hernandez is a science fiction and fantasy author and long-time fan of speculative fiction. She grew up with her nose habitually stuck in a book and her mind constantly wandering to make-believe worlds full of magic and adventure. She began writing after reading J. R. R. Tolkien’s The Lord of the Rings many years ago and is now happily engaged in an exciting and lifelong quest to tell captivating stories.

She is a clinical social worker and the proud mother of two girls. She also enjoys drawing, reading, graphic design, playing video games, and making happy memories with her family and friends.

Daisy was born and raised in Taos, New Mexico. After graduating from high school she attended the Undergraduate Theater School at Northwestern University. Realizing that cities weren’t her thing, she transferred to Colorado College in the mid 1990’s. She spent her 20’s Ski Patrolling, Raft Guiding, and Raft Racing with the US Women’s Rafting Team (yes, it’s a real thing) in Colorado where she eventually met her husband and moved with him to Snowbird, Utah. After receiving a degree in Environmental Science from the University of Utah, Daisy turned to small scale farming for the next 18 years. She founded and ran Copper Moose Farm in Park City, Utah for 14 years. Daisy has returned to her roots (after literally growing roots for well over a decade) in performance as a Voice Over Artist. Hard work, dedication, a commitment to excellence, and infectious enthusiasm have been a hall mark of Daisy’s path through life. Daisy narrates audio books, produces voice overs in commercials, educational videos, documentaries and corporate recordings. She lives in Park City Utah with her family enjoying the Intermountain West that she was born and raised in and performing with her band, The Dirt Road Ramblers.