I am thrilled to be hosting a spot on the SCAVENGER HUNT by Chad Boudreaux Blog Tour hosted by Rockstar Book Tours. Check out my post and make sure to enter the giveaway! 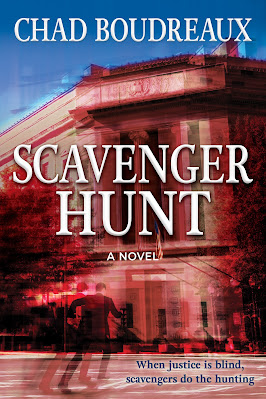 Blake Hudson just wants to serve his country well as a lawyer for the United States Justice Department—but when an unknown threat begins plotting his downfall, he must find who is setting him up before it costs him his life.

Scavenger Hunt is a suspense novel chronicling the plight of Blake Hudson, a Justice Department lawyer assigned to a clandestine counterterrorist group created to bypass onerous legal requirements. After the group mysteriously disbands, Hudson becomes the scapegoat and is transformed from hunter to hunted. As he searches for answers and attempts to piece the puzzle together, people are following him, trying to kill him.

Written for fans of fast-paced thrillers, dry humor, political gamesmanship, and Clue-like twists and turns, Scavenger Hunt carves out a distinct niche best described as a hybrid of the Robert Ludlum classics and works by Brad Meltzer. Blake Hudson’s story addresses issues that have shaped recent elections and continue to frustrate interest groups and government leaders, while featuring the inner workings of the U.S. Department of Justice Building—arguably the most important and misunderstood agency in the federal government. Author Chad Boudreaux’s unique voice and page-turning storytelling packs a plot-driven punch that readers won’t be able to put down.

Blake Hudson swallowed the final drops of his fourth cup of coffee, grabbed the sports section from the morning paper, and rushed to gather his things after spending too much time engrossed in The Washington Post. He couldn’t be late. His boss didn’t tolerate tardiness or excuses, and after just five months on the job, Blake could ill afford any unforced errors. And to be sure, Blake’s participation in today’s meeting would be more important than ever. He had learned some shocking information, leaked to him during a phone call with a judicial clerk at 2:30 a.m., that, if true, could upend today’s vital courtroom hearing involving the terrorist mastermind Omar Saud. Worse yet, it had the potential to place in jeopardy the already-fragile security posture of the entire country.
It was 6:34 a.m. He didn’t have time for the subway, and Uber and Lyft were in short supply. He’d need a taxi.
As Blake scampered from one room to another in search of his wallet, Judge followed him around the bottom floor of the nineteenth-century, two-story row house. The mammoth black dog despised being abandoned. Judge craved to plunge headlong into the wild adventurism beyond the front door. But Blake was dapper from head to toe, dressed in a pinstriped suit and spit-shined dress shoes instead of athletic shorts and sneakers. For the canine, the culmination of context clues was a dispiriting sign that Blake was off again to Nowheresville. Blake realized that Judge’s outlook was bleak. Judge’s frantic movements in the house evidenced his growing discouragement.
To Blake’s knowledge, Judge was the only Great Dane on Capitol Hill. After watching the clumsy beast slip and slide into one wall after another, Blake understood why. The narrow homes in the area, coupled with postage-stamp backyards, were inconducive to pets towering six feet tall on their hind legs. But Blake wasn’t complaining. With a huge dog and a modest salary, he was lucky to have found a place to rent in the nation’s capital. That his landlord was on sabbatical in Europe for a year and had never laid eyes on Judge, only added to his good fortune.
But Blake knew that good fortune came in finite quantities. Another reminder that he couldn’t be late to work.
Remembering that he’d left his wallet at the office, Blake tossed his newspaper on the front windowsill and hurried down the long, narrow hallway to his bedroom. The clip-clop of paw-beats behind him sounded like the echoes of a bass drum. Once he reached the bedroom, he sifted through the aged Folgers coffee container that sat atop his hand-me-down dresser, scooping out just enough quarters buried among the sticky pennies, nickels, dimes, and old movie stubs to get him to the office. Darting back toward the bedroom door, he bulled past Judge and raced to the front of the house. Upon reaching the front door, he patted his pants and coat pockets until he located his access badge and phone.
And then he waited.
The extended hallway allowed Judge ample room to gain momentum. It took a moment for his oversized paws to establish traction on the waxed and worn pinewood flooring. But when that happened, the situation became dangerous. Blake heard him coming—like a runaway locomotive. Judge barreled down the hallway, then slammed on the brakes at the turn, slid, and then . . . a monstrous thud.
“Judge?”
Judge groaned and scrambled to his feet. For five seconds, the two just stared at one another.
“Look, I know we didn’t take a walk this morning. I’ll be home at lunch today. No pet sitter. We’ll go for a walk.”
The trigger-word “walk,” accentuated by Blake, normally piqued Judge’s interest and caused him to scamper to the hook near the back door. That hook anchored Judge’s most prized possession—the leash. The leash, in turn, was the instrument of hope, spurring more excitement than a T-bone steak. But there was no excitement now. Judge just gazed at the leash.
It was the guilt treatment.
Staring into the mirror over the fireplace, Blake ran his fingers through his short, light-brown hair and fiddled with the Windsor Knot on his gold necktie. “Judge, don’t look at me like that. You know I’m late.” Kneeling, he opened his arms. “Come here, boy.”
Temptation proving unbearable, Judge lowered his head and waggled toward Blake, his tail flailing from side to side. Blake grabbed Judge’s ears and then wrapped his arms around his thick neck. “Remember, you’re my best friend.”
Judge opened his mouth as if to smile, his thick, pink tongue draped over his lower lip and his head bobbing up and down in rhythm with his heavy, happy breaths.
The cajoling complete, Blake scurried from the house in search of a cab. He was running out of time. 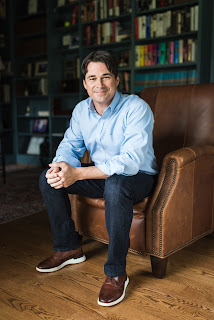 Chad Boudreaux has a broad range of government, legal and corporate experience. Prior to serving as the Executive Vice President and Chief Legal Officer of the nation’s largest military shipbuilder, he served as Deputy Chief of Staff for the U.S. Department of Homeland Security, where he advised Secretary Michael Chertoff on almost all significant matters facing the newly established Department. Before working for Homeland Security, Boudreaux served in several high-ranking positions at the U.S. Justice Department, where he was hired the night before the September 11, 2001 attacks. During his time at the Justice Department, Boudreaux focused most of his time on matters relating to terrorism and homeland security. His career in the government lead him to write his debut novel, Scavenger Hunt, coming out January 2023.

1 winner will receive a finished copy of SCAVENGER HUNT, US Only.