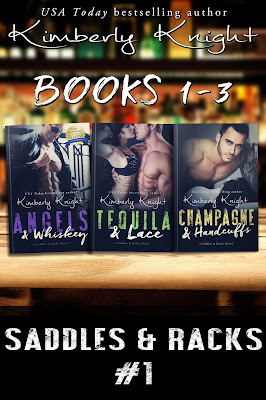 Title: Saddles & Racks (Books 1-3)
Author: Kimberly Knight
Genre: Romantic Suspense
Hosted by: Lady Amber’s PR
Blurb:
Strong. Sexy. Suspenseful.
The first three books in USA Today bestselling author Kimberly Knight’s Saddles & Racks Series. Get to know the men and women of S&R while they take on the seedy underbelly of Las Vegas!
Angels & Whiskey, Saddles & Racks Series, Book 1
Whiskey, women and sleepless nights …
United States Army Captain Gabriel Hastings knew he would always follow in his grandfather’s footsteps. Serving his country was his destiny.
Until he fell in love …
When Gabe’s love affair is cut short, he turns to whiskey for comfort and swears he will never fall in love again.
Until he bumps into an unexpected angel …
By all appearances, Autumn Jones has the perfect life. Her husband, Richard, is a loving man who wants to be a father to her unborn children. But Autumn knows the truth. Richard has a controlling, dark side that leaves nothing to chance, especially Autumn. He’ll stop at nothing to make her the trophy wife he wants her to be.
When Autumn bumps into Gabe, he consumes her every thought, but she can’t act on her feelings. She’s married to a dark man she can never leave.
When he learns who Autumn’s husband really is, Gabe knows he will stop at nothing to protect her. Or is it too late for him to save his angel?

Tequila & Lace, Saddles & Racks Series, Book 2
Army Strong and dripping with sin …
Paul Jackson had his dreams mapped out. He’d graduate from high school, attend college, go pro for football, marry his high school sweetheart and live happily ever after. Until she threw away everything he never knew he wanted. Throwing caution to the wind, he put his country’s dreams before his own.
The Army was a perfect distraction from her. It helped him become a man. To serve, to protect, to fight, to become strong. But when Paul returns home after three tours, he knows there’s nothing better than sexy woman, a shot of tequila and a pocket full of cash.
But he still thinks about her …
Joselyn Marquez’s life changed the night of her seventeenth birthday. A forty-eight hour roller coaster trip sent her running for her life. She was homeless, and her family had disappeared. All odds were against her.
But sometimes the odds work out.
Years later, she’s an FBI agent serving as an undercover escort to investigate sex trafficking in Las Vegas. When the investigation connects her past, will she be able to do the right thing or will she still keep running from the night of her seventeenth birthday?
Tensions will rise.
Sparks will fly.
Passions will soar.
And the past will come knocking … 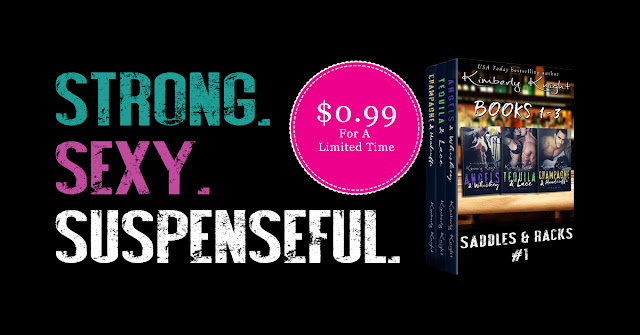 Champagne & Handcuffs, Saddles & Racks Series, Book 3
Young love is just the beginning …
Seth McKenna had wanted to be a police officer for as long as he could remember. Protecting people was in his DNA, especially when it came to his two best friends, Joselyn and Catherine. From the moment he laid eyes on Cat, he knew she’d be his one day.
ONLY 99 CENTS FOR A LIMITED TIME! 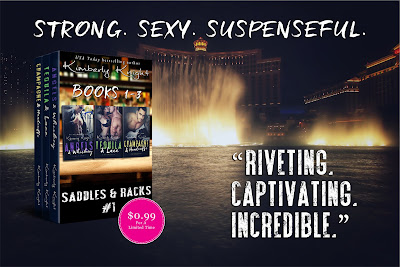 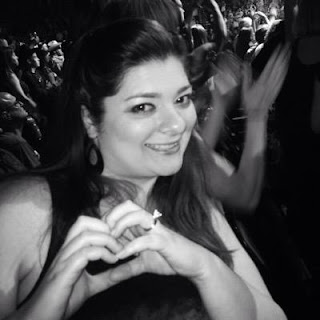 Kimberly Knight is a USA Today Bestselling author who lives in the mountains near a lake in California with her loving husband, who is a great research assistant, and daughter, who keeps Kimberly on her toes. Kimberly writes in a variety of genres including romantic suspense, contemporary romance, erotic romance, and paranormal romance. Her books will make you laugh, cry, swoon, and fall in love before she throws you curve balls you never see coming.
When Kimberly isn’t writing, you can find her watching her favorite reality TV shows, binge-watching true crime documentaries, and going to San Francisco Giants games. She’s also a two-time desmoid tumor/cancer fighter, which has made her stronger and an inspiration to her fans.
Amazon | Goodreads | Facebook | Bookbub | Newsletter | Twitter | Website | Instagram

ONLY 99 CENTS FOR A LIMITED TIME!

One Reply to “Book Blitz: Saddles & Racks, by Kimberly Knight”