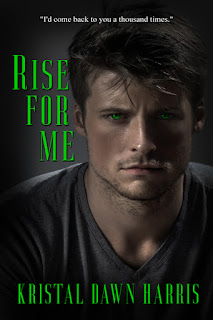 Rise for Me
by Kristal Dawn Harris

Vampire and warlock, Roman Lee, spent centuries alone as ringmaster of the carnival. After befriending and healing a scarred, young woman, Roman realizes Mariah is his mate. He waits for her, but when she departs from his life, his torture knows no bounds. Now he’s risen, unforgiving and angry, forced from his grave by the one woman who captured his heart, but will another secret and the call of his mate change everything?

The steady call of Roman’s blood and the promise of peace brings Mariah Stone home to the carnival and the vampire she left behind. He ignores her until she forces him from the grave with her blood. His anger crushes her already broken spirit, but she is determined to win Roman’s forgiveness and free him from their bond. Denied passion leads them down a path of magic and desire, while a devastating secret threatens eternal love.

Roman studied the perfection before him with something akin to regret filling his spirit. It should have been different between them. He momentarily questioned his decision before setting the ruby stone on her bedside table. In a whisper, he began to chant the words that would strengthen their connection and seal Mariah’s healing so it couldn’t be undone by anyone, ever.

Blood exchanged will seal my gift

The flesh will stay, no spell will lift

Let the night be filled with dreams

So she won’t remember it was me

Roman lifted his hands, palms up, to begin the next part of the spell using the stone, but when Mariah moved in her sleep and threw one leg out from under the covers, he didn’t know if he could do it. Bare flesh, creamy and soft, slid along the quilt as Mariah moaned in her sleep and spoke his name. A dull light formed inside the ruby stone, strengthening with Mariah’s moans. Roman closed his eyes against the onslaught of desire brushing against his body and soul. It sought entrance, control, and a response. She must be dreaming of him. It was the only explanation. His eyes snapped open when the bed creaked. Heavy-lidded, sleepy eyes opened with a reddish glow lighting their dark depths.

“Mariah?” Roman spoke her name as a question, not fully understanding what was happening, but the stone did. Brilliant red light shot from the ruby’s rough edges, saturating the walls, the floors, and everything in between in its glow. Roman tilted his face as Mariah rose from her reclined position to sit on the side of the bed. A trickle of unease sped down his spine. This wasn’t supposed to happen. Mariah was using the stone against him, and her desire magnified his own, fed off it, and seduced in strong waves. Roman groaned as his cock swelled painfully and his body clenched with need.

The question was asked so softly Roman wasn’t sure he heard her voice. Mariah’s eyes blazed with color. She was a temptress, a woman bent on crushing what remained of his heart, and he hated her for it. Roman pinched the bridge of his nose when the truth reared its ugly head, forcing him to accept what was meant to be. He craved her like no other. This would be the one and only night they ever spent together. The spell was cast, and she shouldn’t remember anything, so for once, he let the caged passion soar. “I come to you as all three.”

Kristal Dawn Harris is an award-winning, Rone nominated, American romance author. She has been married for 27 years and has two children. Kristal finished a degree from Miami University in Accounting Technology, but quickly realized she preferred words over numbers. She is an avid reader and, in particular, loves darker paranormal romance. Her hobbies include coin collecting, physical fitness, stained-glass art (beginner), poetry, and song writing.

You can find out more about Kristal at https://www.kristalharris.com/ 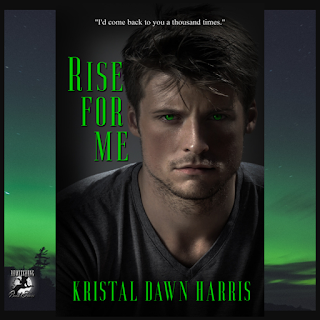 5 Replies to “Spotlight & Excerpt: Rise For Me + Giveaway”