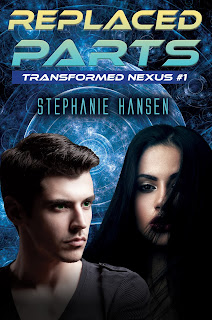 by Stephanie Hansen
Genre: YA Sci-Fi
Publisher: Fire and Ice YA and Tantor Audio
Date of Publication: 02/23/21
ISBN: 9781953735027
ASIN: B08RZB9PXL
Number of pages: 232
Word Count: 67,770
Cover Artist: Caroline Andrus
When a clopil named Vex warns you of danger…Listen!
In the year 2163 a corrupt World Government controls everything on our planet and beyond.
Sixteen year-old Sierra has been so caught up in her own world of saving animal test subjects and her father’s disappearance, she hasn’t paid much attention. When she finally finds his location, she and her friend set off on a covert interplanetary mission to rescue him, she begins to see the corruption first hand.
Discovering that her father has been on the front lines secretly trying to save human test subjects inspires her to join a revolution. But she is afraid of the collateral damage of hurting the people she loves. Will she find the strength to make a deal with the mad scientist Cromwell to save not just her friends and family but everyone?

To make a smoke bomb all you need is potassium nitrate, sugar, water and a fuse. Programming holograph messaging to be ‘smoke screen projection only’ is much more difficult. It’s a digital version of invisible ink and completely security cam resistant. I pull up Yesha’s incoming call. The smoke allows her image to take shape and it almost feels like she’s in the room with me.

“I can’t believe you talked me into this, you little gomer.”

Yesha frequently begins conversations in the middle, no introduction or formal interrogation into my life. I think that’s why I like her.

“It didn’t take much to convince you.”

“Did you receive the package?”

I hold up the box addressed to me, Sierra, but I’ve removed the contents.

Yesha’s laugh is like a chorus of toads with hiccups. Her image vibrates on the smoke.

“That’s only the box, you drone bug!”

I hold up the syringes that had been inside the box.

“Be careful with those. Check the labels.”

I roll a syringe in my hands like Kitchen, one of our home bots, does with pretzel dough.

“One says healing serum, which I asked for. Why does the other say anti?”

Yesha interrupts before I collapse the projection.

“Just be sure not to give the anti if you haven’t given the original serum.”

After she’s gone, I look at my subject.

I shouldn’t be doing this, but I find the koala’s eyes drawing me in like a poli-magno crash about to happen. It’s impossible to turn away.

The Science Olympiad team’s going to put me on probation again, which stinks since they’re the only local, human friends I have.

Following protocol gets us nowhere, however.

Mom’s going to be agitated because this isn’t the first time I’ve broken the rules.

I guide the koala out of the cage, leaving her brothers inside. I have to shake off feelings of jealousy. I don’t have any siblings.

Uplifting experiments have given us animals who speak. “Why do you look so sad, Eucarpo?”

The koala glances back at her brothers and then her eyes look up at me past her round, stub nose, and adorable ears. The sensation of an infant wrapping tiny fingers around mine envelops me. I can’t let them endure more unethical testing just so we can have the best DNA combination. I was okay with the testing when the purpose was to help those that were sick and it was beneficial to the koala species, but I can’t stomach testing these sweet things just for superficial reasons.

“They’re going after you if this works.”

“Well, yeah, but that was just practice. This is the first time I’ve used it on a living being. Don’t worry, it should all go as planned. I’m just being paranoid.”

It would be nice if I could stop blabbering when I’m nervous. Sometimes you just have to go for it and see where the cards fall. That was something my dad used to say. Before he disappeared, he used to tell me lots of things. He’s been gone almost a decade, but I might as well as have “Missing Dad” tattooed on my forehead.

As she raises the fur above her eyes, I scratch behind her ear, and she leans into it like a bear scratching its back on a tree trunk. Her fur is soft as manufactured silk charmeuse.

“You sure you’re ready for this?”

“It gets us closer to freedom, so I been ready a long time.”

She takes another glance at her brothers, and I pick up the syringe with self-healing serum. I begin the sedation process as no one wants to be awake when artery lining fortifies, muscles pull with new agility, and brain tissue encases itself with a biting, thin metal sheet. Another reason I’m jealous of Eucarpo is that she responds to sedation, and I don’t.

As Eucarpo drifts into a peaceful sleep, I look out the school windows and see only the steel and glass of surrounding buildings. Their reflections mirror the sky. Today the unending blue gives the impression of being in the middle of the sea. On gray days, it’s as if I’ve been swallowed by thunderclouds. I can only imagine how green fields would look. People used to love the smell of fresh-cut grass. That was before an asteroid broke through the atmosphere damaging our ecosystem and killing all plants, causing our world to work together to save Earth and its remaining, limited vegetation. The only vegetation left is kept in guarded areas and labs.

I think I can hear the machines used to keep the atmosphere from collapsing but the sound isn’t right. Instead of a hum, I hear iron clanging. The serum glides through the syringe into Eucarpo and her breathing intensifies as the cells within her body multiply. No, that isn’t the machines. It’s locker doors slamming,followed by footsteps of someone coming down the hall. No one should be here now. They should all be at the assembly that I’m skipping. I must finish before anyone else arrives. I look at the oxygen and pulse readings, cringing with every spike. It feels like an hour passes as I look at the screens, but I know it’s only been seconds. I count breaths and clock ticks, staring at Eucarpo’s oxygen and platelet numbers rising.

“Come on, the science minds keep refreshments in here.”

I think I recognize the voice coming down the hall. Every muscle in my body wants to stiffen, but I can’t freeze now.

Luckily, the serum is fast acting and Eucarpo’s readings are settling. I inject the awakening treatment and then I throw the syringes and all remaining evidence into the incinerator. The burning and sanitizing process will turn these things into energy or something else useful. Eucarpo stirs a little when I hear the door sensor click.

As the voltball captain and visual arts queen walk in, I step in front of Eucarpo.

“Look, we found someone avoiding the assembly,” Milcah says as she nudges Danver in the ribs with her elbow. 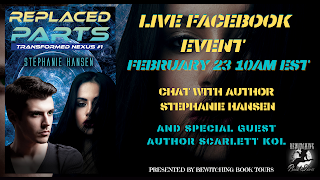 Stephanie Hansen is a PenCraft Award Winning Author. Her novella series, Altered Helix, released 2020. Her short story, Break Time, and poetry has been featured in Mind’s Eye literary magazine. The Kansas Writers Association published her short story, Existing Forces, appointing her as a noted author. She has held a deep passion for writing since early childhood, but a brush with death caused her to allow it to grow. She’s part of an SCBWI critique group in Lawrence, KS and two local book clubs. She attends many writers’ conferences including the Writing Day Workshops, New York Pitch, Penned Con, New Letters, All Write Now, Show Me Writers Master Class, BEA, and Nebraska Writers Guild conference as well as Book Fairs and Comic-Cons.

She is a member of the deaf and hard of hearing community. 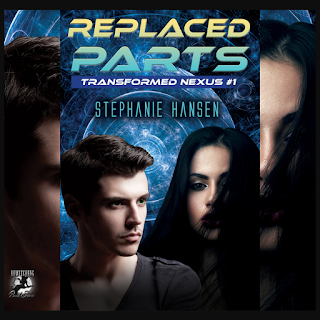