I am thrilled to be hosting a spot on the OBSERVER by Robert Lanza & Nancy Kress Blog Tour hosted by Rockstar Book Tours. Check out my post and make sure to enter the giveaway! 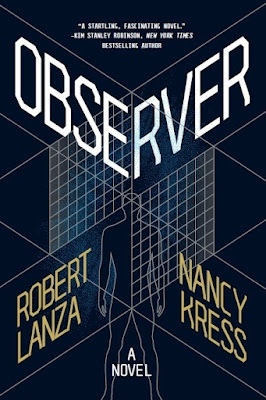 A mind-expanding journey to the very edge of science.

Caro Soames-Watkins, a talented neurosurgeon whose career has been upended byncontroversy, is jobless, broke, and the sole supporter of her sister, a single mother with a severely disabled child.

When she receives a strange job offer from Nobel Prize-winning scientist Sam Watkins, a great uncle she barely knows, desperation forces her to take it in spite of serious suspicions.

Watkins has built a mysterious medical facility in the Caribbean to conduct research into the nature of consciousness, reality, and life after death. Helped in his mission by his old friend, eminent physicist George Weigert, and young tech entrepreneur Julian Dey, Sam has gone far beyond curing the body to develop a technology that could solve the riddle of mortality.

Two obstacles stand in their way: someone on the inside is leaking intel and Watkins’ failing body must last long enough for the technology to be ready.

As danger mounts, Caro finds more than she bargained for, including murder, love, and a deeper understanding into the nature of reality.

A mind-expanding journey to the very edges of science, Observer will thrill you, inspire you, and lead you to think about life and the power of the imagination in startling new ways. 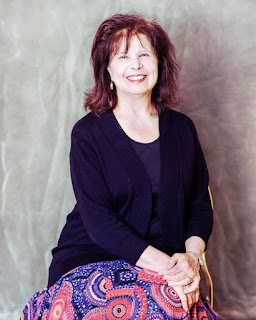 Nancy Kress is the author of thirty-four books, including twenty-six novels, four collections of short stories, and three books on writing. Her work has won six Nebulas, two Hugos, a Sturgeon, and the John W. Campbell Memorial Award. She writes frequently about genetic engineering; including the acclaimed science-fiction novel Beggars in Spain. Kress’s fiction has been translated into Swedish, Danish, French, Italian, German, Spanish, Polish, Croatian, Chinese, Lithuanian, Romanian, Japanese, Korean, Hebrew, Russian, and Klingon, none of which she can read. In addition to writing, Kress often teaches at various venues around the country and abroad, including a visiting lectureship at the University of Leipzig, a 2017 writing class in Beijing, and the annual intensive workshop TaosToolbox. Kress lives in Seattle with her husband, writer Jack Skillingstead, and Pippin, the world’s most spoiled Chihuahua. 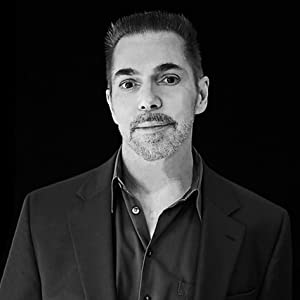 Robert Lanza is an American scientist and author whose research spans the range of natural science, from biology to theoretical physics. TIME magazine recognized him as one of the “100 Most Influential People in the World,” and Prospect magazine named him one of the “Top 50 World Thinkers.”

He has hundreds of scientific publications and over 30 books, including definitive references in the fields of stem cells, tissue engineering, and regenerative medicine. He is a former Fulbright Scholar, and studied with polio-pioneer Jonas Salk and Nobel laureates Gerald Edelman (known for his work on the biological basis of consciousness) and Rodney Porter. He also worked closely (and co-authored papers in Science on self-awareness and symbolic communication) with noted Harvard psychologist BF Skinner. Dr. Lanza received his undergraduate and medical degrees from the University of Pennsylvania, where he was both a University Scholar and Benjamin Franklin Scholar.

Lanza was part of the team that cloned the world’s first human embryo, the first endangered species, and published the first-ever reports of pluripotent stem cell use in humans.

Lanza and his colleagues were also the first to demonstrate that nuclear transplantation could be used to reverse the aging process and to generate immune-compatible tissues, including the first organ tissue-engineered from cloned cells. One of his early achievements was his demonstration that techniques used in preimplantation genetic diagnosis could be used to generate human embryonic stem cells without embryonic destruction.

He and colleagues have also succeeded in differentiating human pluripotent stem cells into retinal cells, and has shown that they provide long-term benefit in animal models of vision loss. Using this technology some forms of blindness may be curable, including macular degeneration and Stargardt disease, a currently untreatable form eye disease that causes blindness in teenagers and young adults. Lanza’s company received FDA approval to carry out clinical trials in the US using them to treat degenerative eye diseases, as well approval for the first human pluripotent stem cell trial in Europe. The first patients reported improved vision in the eyes treated with the cells, which The Guardian said “represents a huge scientific achievement.”

Dr. Lanza and his colleagues published the first-ever report of human pluripotent stem cells transplanted into human patients. The patients who received the stem cell transplants say their lives have been transformed by the experimental procedure–they report that they can use their computers, thread a needle, or even go to the mall or airport on their own.

Lanza has also been a major player in the scientific revolution that has led to the documentation that nuclear transfer/transcription factors can restore developmental potential in a differentiated cell. One of his successes was showing that it is feasible to generate functional oxygen-carrying red blood cells from human pluripotent stem cells. The blood cells were comparable to normal transfusable blood and could serve as a potentially inexhaustible source of “universal” blood. His team also discovered how to generate functional hemangioblasts – a population of “ambulance” cells – from hES cells. In animals, these cells quickly repaired vascular damage, cutting the death rate after a heart attack in half and restoring the blood flow to ischemic limbs that might otherwise have to be amputated.

Lanza and a team lead by Kwang-Soo Kim at Harvard University have also reported a safe method for generating induced pluripotent stem (iPS) cells. Human iPS cells were created from skin cells by direct delivery of proteins, thus eliminating the harmful risks associated with genetic manipulation. The Editors of the prestigious journal Nature selected Lanza and Kim’s paper on protein reprogramming as one of five “Research Highlights.” Discover magazine stated, “Lanza’s single-minded quest to usher in this new age has paid dividends in scientific insights and groundbreaking discoveries.” Fortune magazine called him “the standard-bearer for stem cell research.”

Dr. Lanza has received numerous awards, including being named one of TIME Magazine’s “100 Most Influential People in the World”; the 2013 Il Leone di San Marco award in Medicine (The Italian Heritage and Culture Committee, along with Regis Philbin [in Entertainment]); including an NIH Director’s Award (2010) for “Translating Basic Science Discoveries into New and Better Treatments”; the 2010 ‘Movers and Shakers’ Who Will Shape Biotech Over the Next 20 Years (BioWorld)(along with Craig Venter and President Barack Obama); the 2007 100 Most Inspiring People in the Life-Sciences Industry (PharmaVOICE, “For his discoveries ‘behind the medicines making a significant impact on the pipelines of today and of the future'”; the 2007 Outstanding Contribution in Contemporary Biology Award (Brown University, “For his groundbreaking research and contributions in stem cell science and biology”; the 2006 All-Star Award for Biotechnology (MA High Tech, for “pushing stem cells’ future”); the 2005 Rave Award for Medicine (Wired magazine, “For eye-opening work on embryonic stem cells”); and Lanza is listed in Who’s Who in America, Who’s Who in the World, Who’s Who in Medicine and Healthcare, Who’s Who in Science and Engineering; Who’s Who in American Education, and Who’s Who in Technology, among others.

Dr. Lanza and his research have been featured in almost every media outlet in the world, including CNN, TIME, Newsweek, People, as well as the front pages of the New York Times, Wall Street Journal, Washington Post, among others (his work has also been the cover story of US News & World Report, Wired magazine, and Scientific American).

In 2007, Lanza published a feature article, “A New Theory of the Universe” in The American Scholar, a leading intellectual journal which has previously published works by Albert Einstein, Margaret Mead, and Carl Sagan, among others. His theory places biology above the other sciences in an attempt to solve one of nature’s biggest puzzles, the theory of everything that other disciplines have been pursuing for the last century. This new view has become known as Biocentrism. In biocentrism, space and time are forms of animal sense perception, rather than external physical objects. Understanding this more fully yields answers to several major puzzles of mainstream science, and offers a new way of understanding everything from the microworld (for instance, the reason for Heisenberg’s uncertainty principle and the double-slit experiment) to the forces, constants, and laws that shape the universe. Nobel laureate E. Donnall Thomas stated “Any short statement does not do justice to such a scholarly work. The work is a scholarly consideration of science and philosophy that brings biology into the central role in unifying the whole.”

You can read more about Dr. Robert Lanza’s work at: