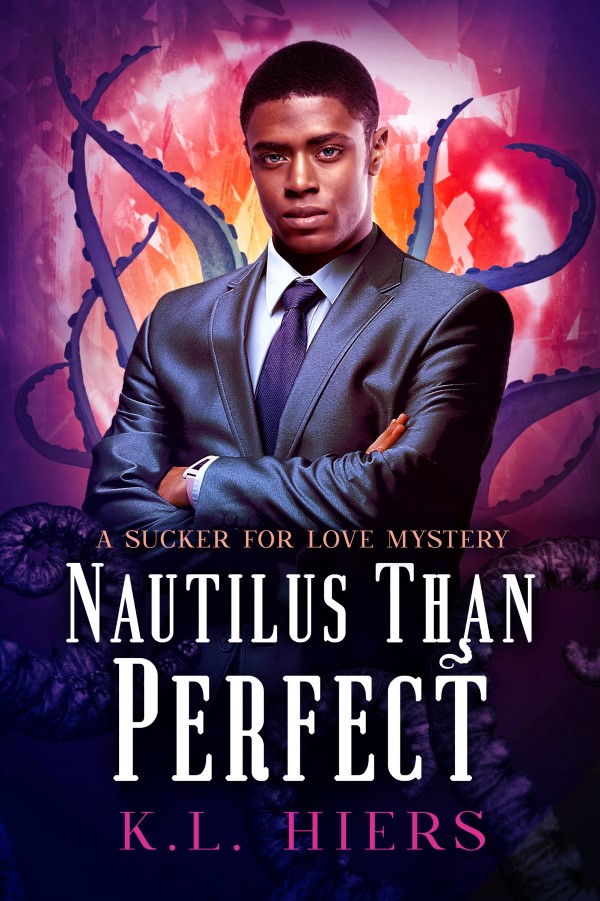 Tropes: False Start, Unrequited Love (Or Is It?), Pining For Your Partner, Office Romance

It is a standalone story, but the author recommends reading the previous books.

It does not end on a cliffhanger.

Detective Elwood Q. Chase has ninety-nine problems, and the unexpected revelation that his partner is a god is only one of them.

Chase has been in love with Benjamin Merrick for years and has resigned himself to a life of unrequited pining. But when they run afoul of a strange cult, Merrick’s secret identity as Gordoth the Untouched slips out… and so do Chase’s feelings. The timing can’t be helped, but now Merrick thinks Chase only cares about him because he’s a god.

Even more unfortunately, it turns out the cultists want to perform a ritual to end the world. Chase’s mission to convince Merrick his feelings predate any divine revelations takes a back seat to a case tangled with murder and lies, but Chase doesn’t give up. Once he finds out there’s a chance Merrick feels the same way, he digs in his heels. Suddenly he’s trying to court a god and save the world at the same time. What could possibly go wrong?

“You have discovered I am an ancient immortal, and that is the first thing you ask me?” Merrick actually laughed.

“There were many fertility celebrations,” Merrick replied. He sounded bashful. “It was common for worshippers to offer their bodies to us. Due to the nature of our anatomy, ahem, we can copulate with more than one mortal at a time.”

“Of a religious nature.”

“By anatomy, do you mean what I think you mean?” Chase had quite the imagination, but he was dying to hear details.

“Most of the gods have multiple appendages for mating.” Merrick ducked his head. “Though we do not actually need a partner for reproduction.”

“Where’s the fun in that?” Chase teased.

Merrick laughed, smiling again. “My father, Baub, personally spawned thirteen of us in all.”

“So you’ve got twelve siblings?”

“More still if you count my half brothers and sisters.” Merrick cocked his head. “You really do not know anything about the gods, do you.”

“No, not really,” Chase admitted. “I know some of the names, I know a few holidays, and uh, that’s about it. Definitely wanna hear more about the copulating.”

“Now you are being obscene.”

“What?” Chase grinned slyly. “I’m a heathen. I don’t know any better. Educate me.”

“No.” Merrick’s tone was firm, but he was smiling.

“Got it, you’re not an easy god. I respect that.” Chase winked. “Need to buy you dinner before you show me the tentacled goods.”

“Detective Chase!” Merrick’s eyes widened. “Are you… are you flirting with me?”

“Damn, you are a good detective.”

“That is not acceptable behavior,” Merrick scolded. “Is this because now you know I am a god, you expect me to be promiscuous?”

“I told you that I did not want this to affect our working relationship,” Merrick grumbled. “I expected better from you.”

“Well, it is not funny,” Merrick continued to complain. “The nature of my intimate parts is not up for discussion.”

“For the record, I wanted to know all about your intimate parts before I found out you were a god,” Chase said honestly.

Merrick didn’t immediately respond, and he looked confused. “Are you referring to the clothing-optional invitation?”

“The one we’ve never, ever talked about?” Chase leaned against one of the desks. He didn’t see any point in hiding his feelings now. “Yeah, that one.”

“I am not here to partake in physical pleasures, no matter how tempting you may be.”

“Obviously,” Merrick huffed. “It is why I had to refuse your advances that night. I cannot allow myself to become distracted by your sensual sorcery.”

“Sensual what now?” Chase questioned if he was awake right now and almost pinched himself to check.

“It does not matter,” Merrick hissed impatiently. “You are my partner, and it would be detrimental to Merrick’s future in law enforcement to become sexually involved with a coworker.”

“Okay, the speaking in third person is weird—”

“Do not bring this up again,” Merrick snapped. “For my sake and Merrick’s, I must insist you stop right now. I cannot risk damaging his legacy over physical pleasures. I do not know how else I can refuse you and make you understand.”

“Listen to me,” Chase pleaded, a flicker of hope rekindling inside of him and spurring him on. “I never thought in a million years that you’d ever be into me! I didn’t have a clue! I don’t just want physical pleasures, okay? I’m sure that’s all super great with your tentacles and appendages or whatever, but I’m—”

“Detective Chase, please,” Merrick said firmly, holding up his hands for silence. He shook his head, his face contorting in pain. “Please stop.”

The words were right on the tip of Chase’s tongue.

But I’m in love with you, you big, beautiful idiot!

He couldn’t bring himself to say it, seeing how upset Merrick already was, and he fell silent. His mind was still reeling from learning that Merrick had found him attractive all of this time—What the hell was sensual sorcery anyway?—and he planned to ride that stroke to his ego and hold on to it for as long as he could.

It wasn’t a confession of undying affection, but it was much more than he ever thought he would have.

K.L. “Kat” Hiers is an embalmer, restorative artist, and queer writer. Licensed in both funeral directing and funeral service, she worked in the death industry for nearly a decade. Her first love was always telling stories, and she has been writing for over twenty years, penning her very first book at just eight years old. Publishers generally do not accept manuscripts in Hello Kitty notebooks, however, but she never gave up.

One Reply to “Book Blitz & Excerpt: Nautilus Than Perfect + Giveaway”