This post is part of a virtual book tour organized by Goddess Fish Promotions. Anya Summers will be awarding a $25 Amazon or B/N GC to a randomly drawn winner via rafflecopter during the tour. 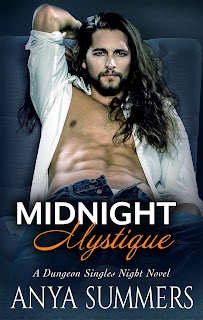 The last thing she expects is for the Bad Boy of Eternal Eros to step in, sweep her off her feet, and offer his protection.

Maybe she accepts because they were matched up at the last singles night. Maybe it was the scorching passion she experienced at his skilled hands. Maybe it’s the way he dotes on her daughter.

All she knows is that the more the lines between reality and fantasy blur, the harder it will be to let him go. The more time he spends posing as her fake fiancé, the more she realizes she’s no longer faking her feelings. With every touch, every kiss, every heated glance, she realizes she wants more than one night. She wants the scarred bad boy’s heart to be hers for all time.

Checking the time behind the wall bar, she headed over to the pit. The Pit was a circular section of the club that had been walled off and was a good fifteen feet in diameter. The base of it sat about four feet below floor level. The floor and walls inside it were glossy black. It was a premiere scene location for exhibitionists and voyeurs. It was also where they did the submissives’ selection process, so those who wanted a chance to watch could get a great view.

The dungeon singles nights were Sophia’s brain child. On the night of the events, the participating submissives selected a marker. Each marker indicated the Dom and scene area they were bound to that night. In participating, they agreed to scene with the Dom. Although sex was something that needed to be discussed and agreed upon before the scene began, sometimes people got carried away in the heat of the moment.

It was a great way for single Doms and submissives to meet and scene with someone they might not have chosen otherwise.

On her way to the Pit—the crowd of onlookers had grown—Dakota passed Gabriel’s brothers, Dean, Jase, Finn, and Colin. She bowed her head out of respect. The Doms had all been superb help this past week, pitching in since their event coordinator Sophia was still recovering from her injuries. It made Dakota wonder if she would end up scening with any of the brothers. Granted, years ago she had spent a night with Dean and with Finn, but it hadn’t been anything more than scratching an itch. Not that she would turn down either Dom. Both Asher and Rafael had appeared, and were participating tonight. Asher was an FBI agent, who had been in on the raid that helped rescue Sophia from her deranged ex. Rafael was a Detective with the Denver Police.

And then there was Ryker. Big and bad, danger oozed from every pore of his broad, six-foot-four frame. His full, thick dark hair was down tonight, and hung well past his massive shoulders, although he had two thick braids streaming from his temples that made her think of Viking marauders. A close-cropped dark beard lined his square jaw and framed his full, sinful lips.

Out of all the Doms at Eros, Ryker unsettled her the most. They had never scened together. All week long, he had pitched in, helping make sure this event happened without a hitch.

Deep down, Dakota should have been grateful for his aid, like she had been for the rest of the Doms lending a hand.

Except, he made her uneasy. Every time Ryker cast his intense burnt cinnamon gaze in her direction, anxiety plagued her, and her skin felt three sizes too small.

She dismissed the idea that she could possibly be attracted to him. There was no way she would go for a Dom who walked that far on the wild side. Hell, he was the epitome of a Bad Boy—he not only drove a motorcycle, but owned a shop that built and repaired them, and did things like base jumping and sky diving.

Anya is a bestselling and award-winning author published in multiple fiction genres. She also writes urban fantasy, paranormal romance, and contemporary romance under the name Maggie Mae Gallagher. A total geek at her core, when she is not writing, she adores attending the latest comic con or spending time with her family. She currently lives in the Midwest with her two furry felines.

Visit her on social media here: