I am thrilled to be hosting a spot on the STAR WARS THE HIGH REPUBLIC: MIDNIGHT HORIZON by Daniel José Older Blog Tour hosted by Rockstar Book Tours. Check out my post and make sure to enter the giveaway! 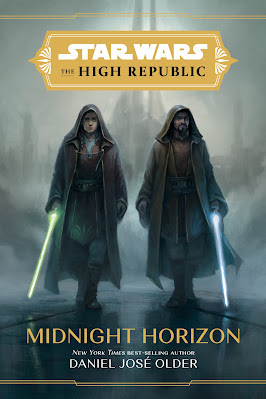 Centuries before the events of Star Wars: The Phantom Menace, in the era of the glorious High Republic, the Jedi are the guardians of peace and justice in the galaxy!

After a series of staggering losses, the Republic seems to finally have the villainous Nihil marauders on the run, and it looks like there’s light at the end of the tunnel. Until word comes of a suspected Nihil attack on the industrial cosmopolitan world of Corellia, right in the Galactic Core.

Sent to investigate are Jedi Masters Cohmac Vitus and Kantam Sy, along with Padawans Reath Silas and Ram Jomaram, all fighting their own private battles after months of unrelenting danger. On Corellia, Reath and Ram encounter a brazen young security specialist named Crash, whose friend was one of the victims of the Nihil attack, and they team up with her to infiltrate Corellia’s elite while the Masters pursue more diplomatic avenues. But going undercover with Crash is more dangerous than anyone expected, even as Ram pulls in his friend Zeen to help with an elaborate ruse involving a galactic pop star.

But what they uncover on Corellia turns out to be just one part of a greater plan, one that could lead the Jedi to their most stunning defeat yet….

Zeen Mrala and Lula Talisola sat across from each other in meditation position, like they had so many times before.
Zeen wasn’t sure when they’d stopped sitting side by side during these sessions and started sitting face to face. She just knew that it felt more intimate this way, more right.
As always, an infinite skyscape seemed to open up between them, like the whole wild galaxy came to life in their connected minds, from its giant spinning planets to the tiniest drops of dew on each trembling leaf.
“Do you feel me?” Lula asked, and Zeen knew she was smiling. They both were.
“Always,” she said. It was true. Even those rare times when they were far away from each other—like during the Republic Fair, when all hell was breaking loose and thousands of people cried out in fear and pain—Lula’s presence still felt like a beacon amid the chaos. It wasn’t that Zeen knew exactly where her friend was, just that she could feel her, her warmth, and it had calmed her, guided her through the carnage until their physical bodies actually found each other.
But Zeen felt something else, too—it had been growing inside her for months, and she had no idea what to do with it, even what to name it.
Fear maybe. Or perhaps love.
Whatever it was, she was pretty sure it was about to explode. She was about to explode.
Lula had been put in charge of the task force. For a Padawan, that was an incredible honor. It meant she’d probably be knighted soon. She didn’t look happy about it, though. Lula was the most ambitious person Zeen had ever met, but it didn’t seem to come from ego—she wasn’t trying to get ahead of everyone else; she just loved learning, loved challenging herself, loved the thrill of forward motion. Zeen knew Lula had been trying to slow down, let each step of the journey be what it had to be, but this kind of honor would’ve lit her up a few weeks ago.
In the briefing room, she just looked sad. And Zeen’s own first thought had been a selfish one: Lula would be knighted, and then what? What room would there be for a random girl from nowhere in the life of a Jedi Knight? The Jedi weren’t supposed to form attachments; they didn’t marry and settle down. They had more important things to do.
Zeen hated the bitter tone in her own thoughts; she should’ve been happy for her best friend in that moment. And what did it mean that Lula didn’t seem happy, either? Only that Zeen was trouble, pure trouble, in her favorite person’s life. A distraction.
That was when Zeen had decided to go to Corellia with Ram and Master Sy. She would get away for a bit, and maybe things would make sense when she got back.
She had instantly regretted the decision, but it was too late.
“Leaving will be good,” Lula said a few minutes later, when they’d both opened their eyes. This was what they did, almost every day: They sat. They let the universe reveal its shimmering secrets around them through meditation, and then they spoke, quietly, gently, being as true as they knew how to be, about whatever was going on that day.
“I’m not sure,” Zeen admitted. “I’m . . .” Was it fear she still felt? Not exactly. Just a discomfort. Uncertainty. But then . . . maybe that wasn’t hers. “Are you?”
“I . . .” Lula didn’t usually come up at a loss for words, but now she trailed off. “I don’t want our hunt for Krix to become who you are.”
Zeen flinched a little. She knew her friend was voicing a very real danger. Still, it hurt. “What will you be when we catch him?”
“I . . .”
“Where will you go?”
“I figured I’d stay here,” Zeen said, because the truth was, After Krix didn’t seem like a real thing, and it wouldn’t until he was caught. She hadn’t given it much thought because it was possible they wouldn’t catch him for years, and it was possible they’d catch him the next day. What point was there in planning when so much was uncertain?
Lula smiled in that way she had that made her look like a little kid. “That would be amazing.”
Zeen returned the smile, but the sadness and uncertainty remained, and she still didn’t know if it belonged to her or to Lula. “I don’t know what it will be like, when the chase is over,” Zeen admitted. “I don’t know who I’ll be.”
“We can find out together,” Lula said. “The galaxy’s changing as fast as we are. I’ve been”—her face darkened— “trying to figure out who I’ll be, too.”
“You got put in charge of a task force, Lula. That’s practically unheard of for a Padawan. What’s wrong?”
An alert dinged over the speaker system, then Ram’s voice came through, breathy with nervousness and restrained giggles. “Um, Zeen Mrala we’re about to leave for Corellia without yo—”
Reath cut him off. “No, we’re not! Don’t listen to him, Zeen. He’s still practicing his jokes. But we are packing up the shuttle, so hurry up, please!”
Lula and Zeen rolled their eyes at each other, and then simultaneously got serious again.
Zeen didn’t want to go anywhere where Lula’s face wasn’t going to be across from her, ready with a thoughtful answer or calm silence. But Zeen was also desperate to get as far away from all this confusion and turmoil as possible.
“I don’t know,” Lula said. “To answer your question. It’s been on me the past few weeks. You’ve seen it. I still don’t have an answer.” She met Zeen’s eyes with that determined gaze, the one that meant victory was imminent. “But I will figure it out, I promise.”
Zeen smiled. She believed her. What else could she do?
Lula smiled too, and it looked real. “Now let’s get you sent off to Corellia.” 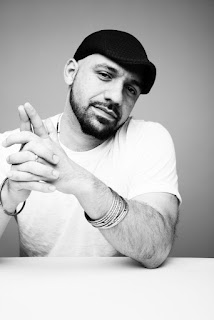 Daniel José Older, a lead story architect for Star Wars: The High Republic, is the New York Times best-selling author of the upcoming Young Adult fantasy novel Ballad & Dagger (book 1 of the Outlaw Saints series), the sci-fi adventure Flood City, the monthly comic series The High Republic Adventures. His other books include the historical fantasy series Dactyl Hill Squad, The Book of Lost Saints, the Bone Street Rumba urban fantasy series, Star Wars: Last Shot, and the Young Adult series the Shadowshaper Cypher, including Shadowshaper, which was named one of the best fantasy books of all time by TIME magazine and one of Esquire’s 80 Books Every Person Should Read. He won the International Latino Book Award and has been nominated for the Kirkus Prize, The World Fantasy Award, the Andre Norton Award, the Locus, and the Mythopoeic Award. He co-wrote the upcoming graphic novel Death’s Day. You can find more info and read about his decade long career as an NYC paramedic at http://danieljoseolder.net/

3 winners will receive a finished copy of STAR WARS THE HIGH REPUBLIC: MIDNIGHT HORIZON, US Only.