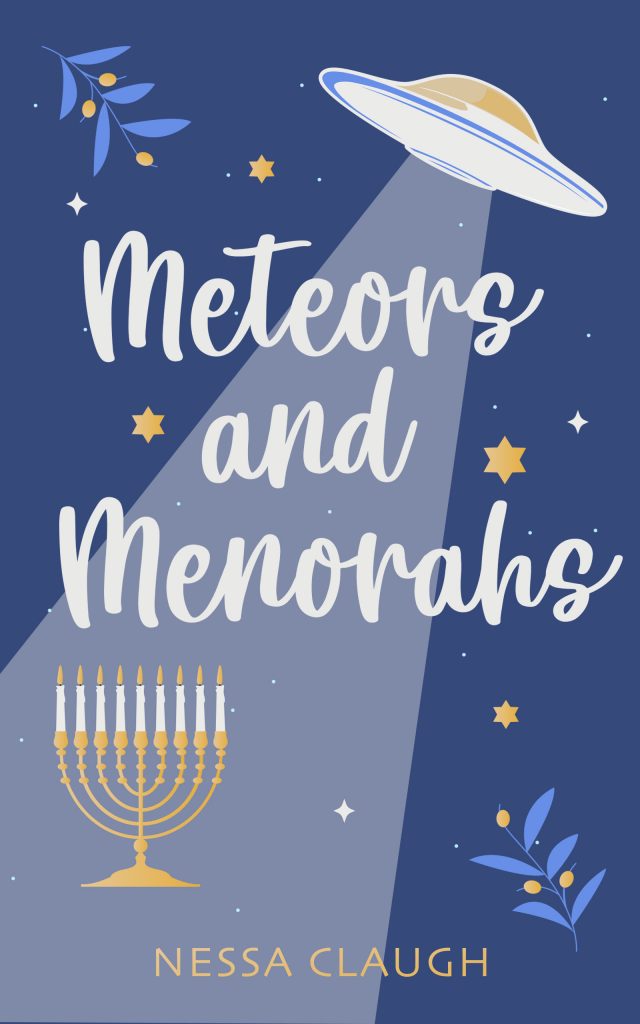 ‘Your dad invited your ex-boyfriend.’ Already committed to going home for Hanukkah, Leah panics at her mother’s text and invites her crush to come with her. The catch? They aren’t dating. The other catch? He isn’t Jewish. He isn’t even human.  Knar has been studying the physiology of humans for years in preparation to introduce Earth to the rest of the galaxy and present them as a species that can adapt to change well. Although he believes in his mission, he’s also had his eye on his coworker Leah, and her invitation to come home with her for the holidays is just the opportunity he’s been looking for.  Going home for Hanukkah is normally the least of Leah’s worries until her mom lets it slip that her dad invited her ex-boyfriend. Desperate to keep him at arm’s length, Leah invites her handsome coworker Kenneth Knar to be a buffer against her family. Having to pretend he’s her new boyfriend doesn’t hurt, and if it annoys her parents, all the better.  He just has to find some way to tell her that he’s more than just a gentile. He’s not even from this planet. And Leah hates liars.  The menorah isn’t the only thing getting hot this holiday season…

Leah finally came into the kitchen. “You made him lunch? Mom! I was going to take him out to Bernie’s!”

“Bernie’s closed a while ago,” her mother said. “Besides, it looks like you feed him plenty at home.”

She poked my deltoid and Leah blushed. “It’s not like he’s hard to cook for,” she said defensively. “Really? Bernie’s closed?”

“Last year,” Deborah said. “If you’d come home more you could have eaten there more before they shut down.”

Leah’s shoulders tightened, and I was starting to see what she’d meant about needing a buffer between her and her family. I’d gotten what she’d promised and more. Time to go to work.

“We have plenty of good restaurants in Kansas,” I said, hoping it would be enough to change the subject. “No food like this, but I’m sure there is food we can get there that we can’t find here.”

Deborah’s lips thinned. “You aren’t eating pork.” It was a statement and she stared at
Leah as though begging her to argue.

Diversion time. I started listing off all the animals you could barbecue, and by the time I got to what I’d read about the invasive reptiles in Florida, both Leah and her mother were suitably horrified to the point where we were off the topic of Leah’s lack of visits and whether she’d eaten pork in Kansas or not.

It started with a concept. I’m Jewish and while I never really received any outright disapproval of anyone I brought home for dinner or the holidays, my cousins weren’t so lucky. Their parents were stricter than mine, and there’s continuing fallout from one marriage that’s caused a major rift. Obviously, it’s not because he married an alien, but marrying or even just dating someone who your parents don’t approve of has shattered a lot of families, and I wanted to go a little more into that while still sticking to my sci-fi roots. Judaism doesn’t get a ton of exposure in sci-fi aside from a few famous negative stereotypes, and I wanted to challenge that.

How to play dreidel. It sounds really stupid, but I never really learned how to play when I was younger. We would just spin them and steal each other’s gelt because my family always sprang for the good stuff. And someone would always get dared to eat one with the foil on because kids are kids. To be fair, Hanukkah isn’t really one of the big Jewish holidays, so we didn’t always celebrate it if there was something else going on, but I never learned what the letters and the scoring meant. Writing a scene where my alien character gets snookered by a child was fun, and I finally know how to play now. Of course, knowing more Hebrew than I did when I was ten certainly helped.

How much I missed the holidays. With the pandemic, my family trimmed down in-person meetings a lot, and even though I was writing about Hanukkah, I found myself missing the story of Passover and fasting at Yom Kippur. They might be annoying or even downright miserable when you’re doing them, but when you don’t have that opportunity to be in person with your family, it takes a toll, and that really came out in my writing.

Meteors and Menorahs is really just an alliterative, catchy title. I was originally going to go with my working title of The Mensch from Mars before I came up with this one, but I was nervous because I didn’t think a lot of people would know what a mensch was (it’s a Yiddish word for a good man), and Knar is most definitely not a Martian. Everyone knows what a meteor is and I’m hoping enough people know what a menorah is, and if not, they’re going to learn.

Really only aspects of their personalities. My family has several adopted Jews who are mostly friends that my generation brought home for the holidays, but they never worked to alienate anyone like Leah’s ex does in this book. I’ve seen elements of Leah’s dad’s resistance to her dating a gentile in my own family, but it was always just quiet disapproval instead of outright arguing about it.

I didn’t write it that way, but if I had to go back and search for one, it would be probably be Don’t let who your kids date or don’t date cause a rift in your family. I mentioned my cousin who is currently on the outs with his parents and siblings because of his marriage, and it’s more of a personality conflict than anything else. It’s been really sad to watch and I know he feels very lonely and excluded because of how his family treats his wife.

Avoiding the one that’s a spoiler, it’s probably that Leah set out on her own to find her own job and her own life. As Jews we tend to stay fairly close to home, and I liked creating Leah as a woman who sets out on her own path while still making the effort to visit home as often as she can until her ex makes that a problem for her. She explores new foods and a new part of the country while still trying to hold tight to her roots in any way that she can.

Knar. I myself am a person who has on more than one occasion let people walk all over me, and Knar does that several times in this book, and it’s infuriating. He wants to let Leah set the pace and be a supportive fake boyfriend, but at the same time, you can’t let someone else dictate everything in your life. I’ve done it, I’ve watched friends do it, and there are times now that I want to scream at them or twenty-five-year-old me, “What are you doing, stop letting them do that,” but hindsight is 20/20. Sometimes we have to experience something negative to grow as a person and learn the shape of it and how it feels so we can avoid that experience again.

I’m trying my hand at some small-town contemporary romance in between other projects. Meteors and Menorahs could have been a contemporary romance if I’d taken out the sci-fi, and I’m interested to see how I write emotional conflict when you can’t blame it on being an alien unfamiliar with Earth culture.

Nessa grew up thriving on trips to natural history museums and Jurassic Park. Once adulthood was upon her, it was only a matter of time before she discovered dominant aliens and shifter erotica. She enjoys titillating the Triassic and stargazing. 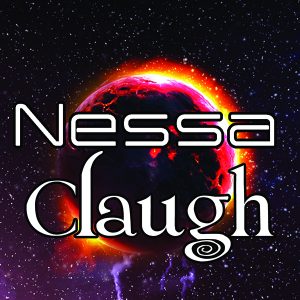 Nessa Claugh will be awarding a $25 Amazon or Barnes and Noble GC to a randomly drawn winner via rafflecopter during the tour.