The final installment in this award-winning series follows African American youth Curtis Jefferson as he escapes from the cursed Fort Grant, struggles to survive a perilous desert crossing, and attempts to evade a fierce lawman. Meanwhile, Isabel and Ray Cienfuegos continue to elude their spectral stalker, the murderous demon-spirit Ezra. Merging Paths is sure to gratify readers who have followed the journey of good versus evil in Path of the Half Moon and Courses of the Cursed.

Vince Bailey’s award-winning Path of the Half Moon-the first book in the Curtis Jefferson series-was the Winner of the Arizona Authors’ Association Literary Award and the Chanticleer International Book Awards for Paranormal and Supernatural Fiction. Book two-Courses of the Cursed-was a Finalist in the 15th Annual National Indie Excellence Awards(R). Merging Paths is the exciting conclusion to the colorful, intricate world presented in this unique paranormal series.

Praise for the Curtis Jefferson series:

“Bailey’s voice sparkles in this gritty tale about injustice, survival, and the mysterious world of angry ghosts and dark magic. Don’t miss it.” – Todd Fahnestock (bestselling author of The Wishing World, Fairmist, and Wildmane)

“Curtis does what all great storytellers do–he creates a suspension of disbelief, granting the listener the right to believe.”  – 5 Star Rating, Chanticleer Book Reviews 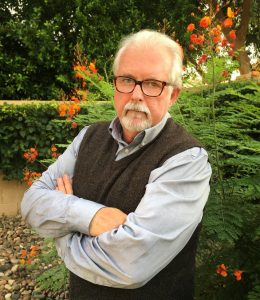 Vince Bailey is a writer who grew up in Central Arizona–specifically the East Valley of the Sun—starting in the late nineteen-fifties. His youthful escapades there in the copper state climes contribute significantly to the nostalgic flavor of his fiction writing. The author’s adolescent haunts of yesteryear tracing around the east side of Mesa crop up frequently as facets of his fictional town of Jacobs Well, the anchor location for several of his books.

Mr. Bailey currently resides in Phoenix with his fiancé, Dr. Veronica Sabater. He continues to create in the same sort of multiple genre style that has animated the Curtis Jefferson series.

One Reply to “Spotlight: Merging Paths, by Vince Bailey”