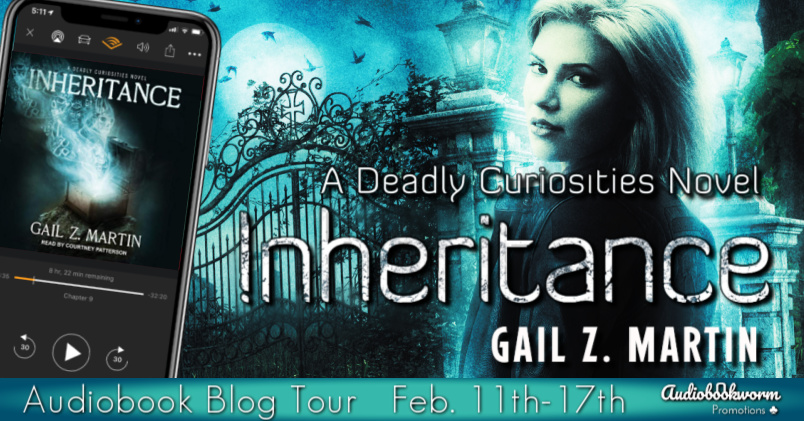 Cassidy Kincaide runs Trifles & Folly in modern-day Charleston, an antiques and curio shop with a dangerous secret. Cassidy can read the history of objects by touching them, and she teams up with friends and allies who use magic and paranormal abilities to get rid of cursed objects and keep Charleston and the world safe from supernatural threats.

Caribbean ghosts terrorize Charleston and start racking up a body count. Then Beckford Pendlewood, the heir to a powerful family of dark warlocks, shows up raving about a bound demon locked in a lost box and begs sanctuary. Can Cassidy and her friends find the demon box, stop the killer ghosts, and break the Pendlewood curse before Beckford’s murderous cousins and the vengeful demon destroy them all?

Inheritance, which is part of my Deadly Curiosities series, has ghosts, curses, demons, witches, supernatural creatures and haunted objects. I love writing about spooky stuff, and I do my best to make the paranormal elements believable so that readers get an exciting thrill ride of a book.

For me, the first step in making the supernatural believable is to research the lore, urban legends and ghost stories of an area. My urban fantasy books are set in real cities, most of which have a long, reputedly haunted past. Those stories arise from an area’s history and the people who came to live there, so understanding the history of a place is also important.

My goal is to make the location of a book so much a part of the plot that the story couldn’t happen in the same way anywhere else. That requires research into the culture, and how the people who live there see themselves and their heritage. Of course, those elements wind back to the supernatural, because people tell stories about their ancestors, the people who settled the area before them, the rogues, scoundrels and criminals, the people most likely to have their spirits stay behind when their lives end.

Magic is always a part of my urban fantasy books, and to make magic believable, it has to have rules and come at a cost. People with magical abilities need to have limits, or they become super-powered and so there’s no suspense. Rules are important so that magic doesn’t just conveniently solve all problems. Also, since I draw from real-world belief systems around the practice of magic, I do my best to be faithful and respectful to those traditions and represent them and their practitioners accurately.

I research the urban legends and ghost stories of a place because those are rooted in the area’s unique history, the people who settled there, and the physical nature of the location. The real legends provide wonderful plot bunnies for ways to incorporate some of those old stories and elements into my new stories, so that the tale feels organic, arising from its location.

The other key element is consistency, which comes back to rules. If creatures act a certain way in one book, or magic has certain abilities or limits, then that has to remain consistent throughout unless you provide a very good reason. That also helps with believability, because the supernatural elements shouldn’t solve every problem easily so they don’t feel like a cheat to get the characters out of tight situations.

I love writing spooky stories and weaving in supernatural elements—and I’m thrilled that readers like to read about ghosts, magic and haunted places. For me, getting to research and write paranormal plots is the best job ever!

Courtney Patterson is an Atlanta native who has been working as an actor on stage, screen, and behind the microphone for close to two decades. She has been narrating audiobooks since 2011 and has fallen in love with the craft of storytelling through narration. Courtney is the mother of two wonderful little weirdos and the wife of a brilliant sommelier. There’s also a cat and some fish in the mix. Courtney couldn’t be happier with her crazy artistic lifestyle and is keenly aware that having good wine always within reach is most likely the reason for her family’s success.