AVIANA WILLOWBROOK had no idea that her mother is a living legend until the day the tattered old copy of “The Fairy Godmother’s Rulebook” arrived in the mail on her twenty-first birthday. Estranged from her mom, and living in Beverly Hills with her father, her stepmother and two super-achieving stepsisters, Aviana is unhappy and directionless.

Hotel heir NASH NOLAN isn’t content to use his family’s fortune, instead he’s used his computer knowledge to create a successful travel app. He’s not the kind of guy to wear his heart on his sleeve, Nash is immediately attracted to Aviana’s confidence and kindness. 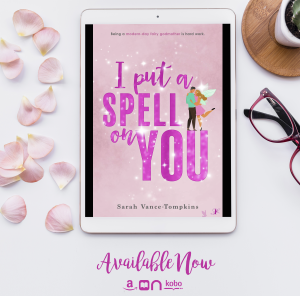 The next time I stirred the house was still and dark. The Fairy Godmother’s Rulebook was open next to me on the sofa. Mesmerized by the pattern of lights dancing across the ceiling from the pool in the backyard. I came to the dawning realization I wasn’t alone. Someone was in the house with me.

Maybe I was dreaming, but every time I came to full consciousness I had the terrifying feeling of being watched. I tried to sit up, but I couldn’t. It was as if I’d lost the use of my limbs. I drifted in and out of sleep. Then a shadow moved over me and soft hands brushed against my face. I couldn’t move and no matter how hard I tried, I couldn’t make a sound.

“Look at her ears,” a man said in a hissing whisper.

A pair of hands gently pushed my hair back over my shoulders. A hand lightly touched the skin on my back, gently moving over the raw, bumpy skin protruding out of the middle of my back.

“She’s fledgling. It won’t be long now,” a woman’s voice whispered. “No more than forty-eight hours.”

I struggled to become fully awake, but couldn’t move. It was as if I was drugged. I laid on the sofa paralyzed with terror and fear until I slipped back to sleep.

3 Replies to “Book Blitz & Excerpt: I Put a Spell On You + Giveaway”