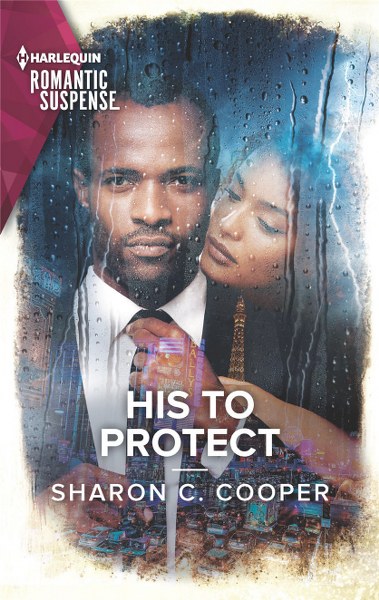 His To Protect
by Sharon C. Cooper
Genre: Romantic Suspense

She looked a criminal in the eye…
…and now she’s a target.
When Connie Shaw witnesses a bank robbery gone horribly wrong, security specialist Trace Halstead makes himself her personal protection detail. Days and nights together make it impossible for Connie and Trace to resist the attraction burning between them. But Connie doesn’t know which she fears more…the threat from the man who wants to end her life or the love of the man trying to save it.
From Harlequin Romantic Suspense: Danger. Passion. Drama.
Add to Goodreads
Amazon * Apple * B&N * Kobo

“So how are you really?” Trace asked when he finished eating. He leaned back and stretched his arm on the back of the sofa. “Be honest.”
Connie curled her legs beneath her as she thought about his question.
“Honestly, I’m better now that you’re here.”
That lopsided grin that she adored tilted the left corner of his tempting lips. It should be against the law for any man to be so good-looking. The way his full lips curled a little too perfectly and the way his eyes twinkled with mischief, even in the dim lighting, made her heart thump a tad bit faster.
Connie lifted her hand when he started to speak. “Before your head explodes with that big ego of yours, let me finish. You’re a good distraction. Before you arrived, every few minutes my mind drifted back to what took place at the bank. It seems surreal. Even though the incident went by fast, in my head it plays out in slow motion.”
Trace lightly brushed a strand of her hair out of her face. “Did you remember anything else?”
“No. I think I told them everything, except for what I told you about the man’s eyes seeming familiar. Right now, though, I’m just praying Richard will pull through.”
“Yeah, hopefully he will.”
“I can’t help wondering how long it will take for me to put the whole incident behind me.”
“It’ll probably take a while.”
“Is that how it was when you left the navy?” He had done two tours in Afghanistan and spent a few years in Japan, but rarely discussed his military days.
The only sound in the room was the television as the silence between them grew. Connie wasn’t sure if discussing that time in his life was off-limits. But that only made her more curious about his experience.
“It will take a lifetime to forget what I went through…what I experienced and what I saw. Each day that I’m away from the military gets easier, though. But occasionally, someone will say something or something will happen that will trigger a memory.”
“What happens when you’re triggered?” she asked, truly curious.
Again, seconds of silence ticked by without Trace responding. He leaned forward and grabbed his water, guzzling half of it before setting it back on the table. Still he said nothing.
“Want to talk about something else?”
“Yeah, that would be good.”
“Okay, well, I was planning to find another comedy show or movie to watch. I figured laughing would do me good. You interested?”
His left eyebrow lifted skyward. “You already know I’m interested,” he said suggestively.
Connie punched him in the arm. “I’m talking about the show. Nothing else.”
Trace chuckled and reached over her, giving her a whiff of his enticing cologne before he grabbed the remote. “In that case, let’s see what’s on.”
He pulled up the channel guide and scrolled through the list.
“I’mma run to the bathroom real quick. Be right back.” Connie hurried down the hall and once she finished, she went to the kitchen. “I’m grabbing a cookie. Do you—?”
A large boom sounded from outside, and Connie jumped. A second later the lights and television went out. She stood frozen in place as panic bubbled inside of her. Had the robbers found her? Had they cut her power?
Alarm bells sounded off in her head as dread seeped into her body. The house was pitch-black, and a dense silence as thick and heavy as San Francisco fog filled the space. Disoriented, her heart practically pounding out of her chest, she fumbled around the kitchen until she bumped into the counter.
“Tr-Trace?”
“I’m right here,” he said calmly, but his voice still made her jump and she gripped the counter tighter.
“I ca-can’t see you.”
Suddenly, the space was illuminated by his cell-phone flashlight. The room was still dimly lit, but at least she could see him. He moved closer and glided the back of his fingers down her cheek. The tenderness of his touch sent heat coursing through her body like warm honey and almost made her whimper. How could someone so big, strong and powerful also be so sensitive and gentle?
“You all right?” he asked, standing close enough for her to see concern in his eyes.
Connie gave a small laugh as her insides quivered. She wasn’t sure if she was feeling anxious because they’d been plunged into darkness. Or if it was because of his closeness. “I’ve been better,” she said.
Trace moved in even closer and lowered his head. His lips brushed over hers in a soothing manner, and Connie immediately felt more at ease. The kiss was like a whisper over her mouth, but just as powerful, as if he’d slipped her some tongue.
“How do you feel now?” he crooned, still standing close enough for them to kiss again.
A smile spread across Connie’s face. “Better. Much better.”
“Good. Now let’s figure out what’s going on with the lights.”
“Do you think they found me?” Connie asked, but wasn’t sure she was ready for the answer.
“If they had, they probably would’ve revealed themselves by now. Give me your hand.” She grabbed hold tight enough to cause pain, but all he said was, “Let’s look outside.”

Award-winning and bestselling author, Sharon C. Cooper loves anything that involves romance with a happily-ever-after, whether in books, movies, or real life. Sharon writes contemporary romance, as well as romantic suspense and enjoys rainy days, carpet picnics, and peanut butter and jelly sandwiches. She’s been nominated for numerous awards and is the recipient of an Emma Award for Romantic Suspense of the Year 2015 (Truth or Consequences), Emma Award – Interracial Romance of the Year 2015 (All You’ll Ever Need), and BRAB (book club) Award -Breakout Author of the Year 2014. When Sharon is not writing or working, she’s hanging out with her amazing husband, doing volunteer work or reading a good book (a romance of course). To read more about Sharon and her novels, visit www.sharoncooper.net
Website * Blog * Facebook * Twitter * Instagram * Pinterest * Bookbub * Amazon * Goodreads

5 Replies to “Spotlight & Excerpt: His To Protect + Giveaway”