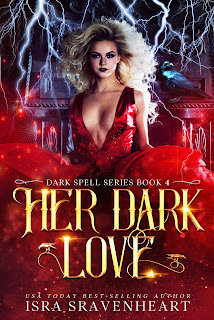 On the warmest summer night, sounds could be heard echoing from the forest.

In the midst of the well-kept woods beside some well placed cherry trees was a quaint gray castle where a coven of young witches could be heard chorusing to one another, telling beguiling tales of yet another mysterious and harrowing day that had just ended.

The castle wasn’t one you would expect of re-told fabrications from another world. It wasn’t a grand palace where you would find queens, kings, and beautiful princesses with long, flowing golden hair! This enchanting establishment housed young witches and warlocks alike, a bountiful place where they could learn and hone in on their most gifted of skills: magic.

This place was owned and managed by a feeble man with silky black hair tumbling down to his neck. He went by the name Magnus Wingdom, and the establishment had been appropriately named Wingdom’s Academy of Ancient Magics. It wasn’t as much of a school at the moment, as the coven only contained thirteen girls. Yes, just girls. It prevented warlocks and witches from getting frisky with each other. That, among many other things, was forbidden!

Young witches would come here to be trained up in their craft, residing in their own coven quarters after the day’s learning was done. The school only housed up to a few at a time, but the students could leave whenever they pleased unless they were careless with their craft. Then they would be told to leave as soon as was universally possible. The last thing the coven needed was an embarrassment to their well-groomed establishment!

The winds grew violent as night was just in its beginning. A young witch hurriedly pulled her cloak close to her body, feeling the night’s chill upon her skin. She let her hood down gently for a moment to reveal chocolate-brown hair that almost surpassed her back. Her eyes were dominated by that of an emerald green, cleverly blending with the brown hue of her tresses.

Her name was Isra and she was just seventeen. She hadn’t long passed her birthday, and now she had come to seek guidance from those who possessed knowledge in the greatest gift of them all. Witchcraft.

Isra had been born a witch. She had known this from her earliest years back when she was able to see those who no longer resided on this earthly plain to more enchanting ideals such as seeing fairies and nature spirits playing in the woods, dazzling her senses as she watched them with vivid curiosity.

She saw worlds beyond any childlike imagination, more than her earthly parents could understand or even encourage. In fact, they did much of the latter. Isra’s parents were very grounded, human type people and so she quickly found she did not fit in with their dull world.

It was no trouble to Isra. She knew there had to be something more to this life than one of going to work all day, coming home and arguing with a respective spouse before once again going out to work the next day.

She sought refuge in fantasy, thrilled by entrancing feats where unicorns grazed upon heavenly plains of the greenest grass, delighted by fairies who stared at Isra as she felt gracious to be in their presence. When she felt a need for solitude, she would go down to the ocean where she found mermaids lying across ochre-colored shores, smiling in joy with one another as they combed their hair that glistened brilliantly with the white moonlight.

Alas, Isra was not a child anymore! She couldn’t go back to those days even if she wanted to. She was becoming a woman, knowing that life held so many doors for her if only she willed them to open first.

She was here to learn, to excel in her craft. She had already begun basic spells, always having her nose inside the pages of a book, but now she was going to be under the teachings of some of the finest in the land with a hope that she would one day be among them. 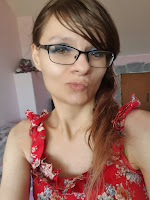 Isra is an eccentric author whose heart resides with the dark fantasy but also the paranormal genres. Cats and coffee are her main interests. She’s also a pretty badass witch and often envisions new adventures involving dragons, witches, warlocks and really likes villains.

Check out Isra’s LinkTree for all of her links and free downloads of some of her books! 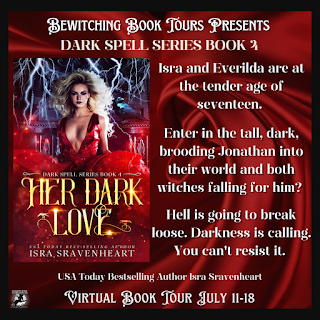 One Reply to “Spotlight & Excerpt: Her Dark Lover + Giveaway”