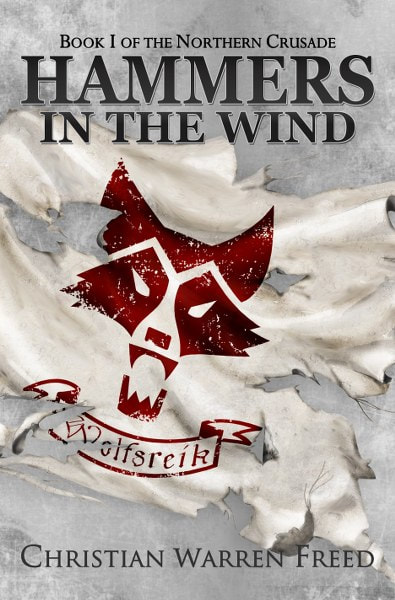 THIS IS NOT YOUR FATHER’S TOLKIEN!
THE END HAS COME. With Hammers in the Wind, veteran turned author Christian Warren Freed brings his epic 9 book series of the battle between good and evil for control of the world of Malweir to its stunning conclusion. In keeping with the finest military fantasy, the Northern Crusade continues enthralling readers. Re-edited to provide a more accurate version of the author’s vision, this is an in your face adventure fans of Erikson, Sanderson, Martin, and more will come to enjoy and love.
The hour of the dark gods return is now at hand.
Exiled millennia ago, the dark gods have tirelessly sought to return and bend the world of Malweir to their will. Their agents roam the world in search of weak willed men. Only through corruption and chaos can their masters return. It begins in the northern kingdom of Delranan the night King Badron’s castle is attacked and his only son murdered and his daughter kidnapped. Angered, he leads his kingdom to war against the neighboring Rogscroft.
A small band of heroes is assembled to find the princess and return her safely but all is not as it seems. Badron falls under the sway of the Dae’shan, immortal agents of the dark gods, and unwittingly begins the final campaign that will reduce Malweir to willing servants of evil.
It begins in Delranan.
Kickstart the adventure by grabbing Hammers in the Wind today. Fans of Tolkien, Brooks, McKiernan, and Martin will enjoy.
Goodreads * Amazon

2 Replies to “Spotlight: Hammers in the Wind + Giveaway”