Ari and Vidar are Viking warriors and blood brothers. Will handsome thrall Elric break their bond…or make it even stronger?

When young Saxon Elric is sold to Norse slave traders, he thinks that his life is over. He is brought across the sea to the settlement of the Norsemen and becomes the chief’s thrall, and neither the chief nor the warriors are lenient with him. Two of the warriors are different, though—Ari and Vidar. Elric senses that their bond goes beyond mere friendship, and wishes that he himself had someone who would care for him.

Ari and Vidar have been lovers for years, but they have to sneak away whenever they want to be together. Vidar is next in line to be leader, as the chief’s nephew, but he’s shy and insecure and only feels at home on the battlefield. Ari looks different than the other warriors, since his mother was of foreign descent, and he’s had to learn how to stand up for himself.

The two of them are blood brothers, linked together forever, but even though they are lovers they can’t go against the taboo that prohibits free men from being passive during sex. Ari feels that something is lacking, and Elric’s arrival gives him an idea—what if they invited Elric to join them in bed? The thought excites him, and Elric himself seems eager to please.

Hrodgar’s heavy hand slapped Elric’s shoulder. His grin was as wide as when he’d told Elric about the birth of his youngest child.

“I know.” Elric smiled back. He’d be embarrassed to admit just how often he’d studied the lone apple tree behind the byre this spring. Not that Hrodgar would find it odd—Hrodgar was the one who had struck that deal with him, after all, that balmy night five years ago when he’d found Elric stealing from his crops. Elric had no trouble recalling the strong, burly farmer grabbing him by the neck and shaking him so hard that the carrots he’d hidden under his tunic fell to the ground. “What do you think you’re doing? I could kill you for trying to steal from me. I have the right.” Elric had cried and begged for his life, exhausted by fatigue and hunger and that hollow pain in his chest that had been there ever since his parents died. He’d only been fifteen, a half-grown boy who had never stolen before. And Hrodgar had sighed and made him a proposition. “Stop your crying now, all right? I won’t hurt you, if you agree to become my slave for five years. After that, you’ll have paid for what you’ve done and you’ll be free to go. Five years from now, on the day when the apple tree blossoms.” He had nodded to a large tree outside the field—even in the dusk, Elric had seen the white flowers shine like stars. He’d agreed, and Hrodgar had become his master.

But not for much longer. It had been almost five years. The crown of the apple tree was exploding with flower buds.

“Strange,” Hrodgar said, shooing away some crows. “To think that you’ll be gone soon.” They were at the edge of the field, the barley tickling Elric’s hands when he touched it. They’d been getting plenty of both sun and rain this summer—it would be a good harvest. A bearable winter.

But he wouldn’t be here for it. “I could stay until the harvest’s all done and—”

Hrodgar shook his head. His hair was like polished copper, thick and wavy. “No such thing. A deal’s a deal. If you’ll come with me to the market tomorrow, that’s good enough. Make sure the chickens stay in their place until I’ve found a buyer for them.”

They left for Bristol the next morning. Hilda was unusually kind, handing Elric a piece of fresh bread to eat on the way. Hrodgar’s wife had never spoken much to him, though she seemed to appreciate having him in the house. Her children were too young to be of much help and working the field was hard. It would be years before they could help their father out.

No, Hilda had always had little to do with him—but Hrodgar was different. In a way, Elric thought of him as a friend. What would have become of him if Hrodgar hadn’t taken him in? He’d had no one to turn to. In Hrodgar’s household he was a servant, certainly, but he ate with the family and slept on a sheepskin by the hearth. It was a better life than the one his parents had been able to give him. The work had made him strong, though he’d never be big and threatening like Hrodgar, and Hilda’s food had put a bit of meat on his bones. In those five years his body had transformed. He was still slender, but his hands were tan and veiny like a man’s, and when he flexed his arms they swelled with muscle. Just like Hrodgar’s.

“Going to be a fine day.” Hrodgar wiped his brow and called for the oxen to move faster. “Plenty of people in town, I should think.”

Elric had been to Bristol Market many times, and he was excited about the trip. Before he’d come to Hrodgar’s house, the only people he’d met were his parents and a couple of neighboring families. His first visit to Bristol had been a shock. There weren’t that many houses, but the people had been far more than he could count—merchants trading their goods and buyers eager to get their hands on livestock, pelts, jewelry and fancy garments. Some of the merchants spoke in strange tongues, and when Elric had asked Hrodgar where they were from, he’d shrugged.

“From all over the world, but do you think I know what they call their lands? Some of them are from the north, though, from lands of eternal snow. You and I wouldn’t survive a day in a place like that.”

Now Hrodgar handed him the reins and reached for the pack by his feet. “Best eat before we get there.” He brought a sweet-smelling loaf to his mouth and chewed off a chunk. Elric reached into his pocket and had a taste of his own bread. It was so soft that his teeth sank into it—he’d never had anything better. All the bread he’d eaten before had been stale and dry.

“Hilda must’ve meant to give this to you.” He glanced at Hrodgar, who wiped crumbs from his beard without looking at him. “It’s much too nice for me.”

“Oh, maybe she did.” Hrodgar grinned, still without meeting his gaze. “But you have it.” When he reached for the reins, his warm hand landed on top of Elric’s. Hrodgar pulled away as if he’d been burned. For the remainder of the trip, he was oddly quiet, and Elric wondered if maybe it had something to do with their hands touching. Ever since he had joined Hrodgar’s household, he’d felt a tingling in his chest every time the other man spoke to him. At first he’d thought it was pure childish admiration, nothing more. By now he knew better. They’d spent every day of the last five years together—alone in the field all day, then sometimes heading down to the brook on hot summer evenings to rinse off the sweat. The image of Hrodgar’s brawny, hairy body was etched into his mind. And he had thought, more than once, about the fact that he was a slave and that he had to do whatever Hrodgar asked of him. Including sharing his bed.

Hrodgar had never requested it. But if he’d asked, Elric wouldn’t have refused.

They reached Bristol some hours later and Hrodgar found a place for his cart in the crammed street. There were people and animals everywhere and the smell of dung mixed with that of roasted meat and beer. And something else, a smell that seemed to whisper to Elric from far away—tar from the huge, slender ships anchored by the shore.

“Watch the goods for me, will you?” Hrodgar seemed hurried, and when he squeezed Elric’s shoulder, his grip was painfully hard. “Just going to… I’ll be back soon.” He disappeared into the crowd. Off to take a leak, probably—but when he wasn’t back a long while later, Elric got worried. He hadn’t been robbed, had he? Part of him wanted to go and check what had happened, but he couldn’t leave the cart.

Then, finally, Hrodgar returned. He was with some men in strange clothing—it took a while before Elric recognized them as Norsemen. They were all bearded, with heavy woolen cloaks and cloak pins that shone in the sunlight. One of the men was older than the rest, with long gray hair and steely eyes. Hrodgar discussed something with him, both of them gesturing wildly. What was that about? Why would the Norsemen have any interest in a simple farmer’s goods?

“Hrodgar!” Elric called when the men were within earshot. “What’s going on? Are they giving you trouble?”

Hrodgar exchanged a look with the gray-haired Norseman, then made a gesture in Elric’s direction. Before he had time to realize what was happening, Elric was seized by two young Norsemen and his hands were tied behind his back.

Hrodgar looked at him. His face was empty, as if they’d never met. “I’m sorry,” he said, but there was no emotion behind his words. Turning to the gray-haired man, he said, “Silver. You promised me silver and I want it now.”

The gray-haired man called out a command and another man came forward with a leather pouch that he put in Hrodgar’s outstretched palm. It wasn’t until then that Elric understood. He’d been sold. Hrodgar had sold him to slave traders.

“You bastard!” Tears of rage stung his eyes as the Norsemen dragged him through the crowd, away from Hrodgar and the cart. “You lying bastard!” He kicked and thrashed. The Norsemen laughed, shoving him between them like a plaything, talking in their twisted language.

He was their slave. And he would never see Hrodgar again. 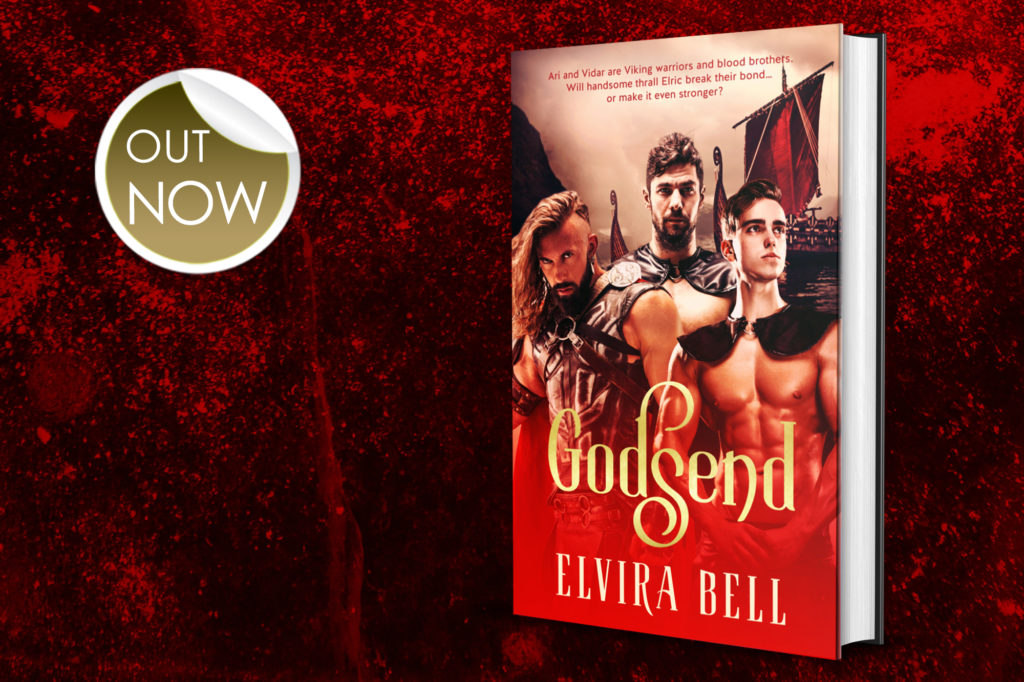 ELVIRA BELL IS GIVING AWAY THIS FABULOUS PRIZE TO ONE LUCKY WINNER. ENTER HERE FOR YOUR CHANCE TO WIN A LOVELY GIFT PACKAGE AND GET A FIRST FOR ROMANCE GIFT CARD! Notice: This competition ends on 10th August 2021 at 5pm GMT. Competition hosted by Totally Entwined Group.