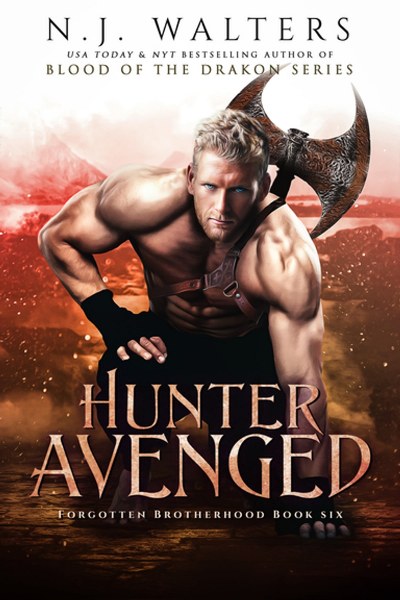 It’s taken Viking hunter Sven Knutson six frustrating months to find her. To track down the angel responsible for compromising the Forgotten Brotherhood and waking the drakon. She may be clever. Resourceful. But no one ever gets away from Sven. Ever.

All Rivka longed for as an angel was a chance to serve on Earth and help humans. Instead, it all went impossibly, horribly wrong, and she still doesn’t understand how or even why. All she knows is that she’s on the run—not only from Heaven’s dangerous elite guard, but also from the Brotherhood, who want answers.

She might just have to trust the immortal Viking whose icy blue eyes make her feel almost wickedly human. Because someone wants Rivka dead and the Brotherhood eliminated. Someone powerful enough to take on the most dangerous assassins who have ever lived. Someone who could unleash the fury of both Heaven and Hell…and Rivka is the key.

Once upon a time N.J. had the idea that she would like to quit her job at the bookstore, sell everything she owned, leave her hometown, and write romance novels in a place where no one knew her. And she did. Two years later, she went back to the bookstore and her hometown and settled in for another seven years.

One day she gave notice at her job on a Friday morning. On Sunday afternoon, she received a tentative acceptance for her first romance novel and life would never be the same.

N.J. Walters is a New York Times and USA Today Bestselling author who has always been a voracious reader, and now she spends her days writing novels of her own. Vampires, werewolves, dragons, time-travelers, seductive handymen, and next-door neighbors with smoldering good looks–all vie for her attention. It’s a tough life, but someone’s got to live it.

One Reply to “Spotlight & Giveaway: Hunter Avenged, by N.J. Walters”