It’s book two in the Lighthouse Bay series, but can be read as a standalone.

The last thing Jeff wants is to spend time with the man who totaled his car—the one he spent years restoring with his late father. But if he wants to resurrect his childhood town’s annual outdoor hockey tournament, he’s got no choice.

The last thing Mika wants is to work with the guy who took off right after the accident, without ensuring he was okay. And working together on organizing Jeff’s proposed tournament sounds like a complete nightmare. He’s got enough on his plate after surviving cancer.

Sparks fly as they’re forced to work together, but is that enough for them to set their differences aside and pull off the tournament in only two weeks? Or will they prove to be immune to the magic of Christmas?

Standing, he held a hand out to the man who was so much his type it was almost laughable. Three or four inches taller than Mika’s own five-ten height, dark brown hair that shone red under the warehouse’s lights, like the deepest shade of mahogany, with charcoal-gray at the temples and above his ears, and lines that fanned out from narrow eyes a dark shade of blue. A high forehead in a heart-shaped face and the physique of a footballer completed the package.

All of that wouldn’t have been a big deal on its own, but the way he held himself with the cool confidence of someone who knew his place in the world?

Yowza. Talk about Mika’s type wrapped in a black wool coat and a stubbled jaw more gray than brown. He’d have been giving Jeff his number if the guy wasn’t scowling at him.

Jeff stared at his outstretched hand. “No.”

“Uh.” Rearing back, Mika dropped his arm back to his side. “Excuse me?”

Zach crept up behind him, gaze swinging from Mika to Jeff. “What’s wrong?”

Jeff waved a hand at Mika. “This is the guy you want me to work with?” He put special emphasis on this, as though Mika were a criminal who’d steal his wallet when he wasn’t looking. Straightening his spine, Mika planted his hands on his hips.

Holland Stone—Zach’s boyfriend and Mika’s ex—approached from where he’d been working on his float for the parade, clad in a dusty T-shirt and even dustier jeans. He squinted at Jeff before turning to Zach and Mika. “You two okay?” He held a hammer in one hand like he meant to wield it. Not that he ever would, but the image would’ve made Mika chuckle had he not been so confused.

And frankly? Kind of hurt. What the hell had he ever done to this guy?

“I can’t work with him.” There was no give in Jeff’s tone.

“Why not?” Zach stepped in close to Mika, butting in against his left side. “Mika’s the best.”

Aw. The ire in Mika’s chest faded a little at Zach’s words. It was nice of him to say, especially since Mika had made the worst of first impressions on him last Christmas.

The amount of disgust in Jeff’s scoff would’ve been impressive had it not been directed at Mika. “I’m not working with the guy who totaled my dad’s car.”

Mika’s head jerked back. “What?”

Zach and Holland swung their gazes his way.

“I didn’t!” Taking a step back, he raised both hands. “I’ve never totaled anybody’s car in my life.”

“Oh no?” Jeff argued, raising both eyebrows, and god, the sarcasm. “Not even a turquoise 1956 Chevy Nomad near the Bluffs in Pacific Palisades? About this time last year? Ring any bells?”

That was where Mika knew this guy from! Jesus, he was still holding a grudge? “Okay, first of all, I apologized, like, seven times. Second, I gave you my number. It’s not my problem that you didn’t call. Like I said—I would’ve paid to get it fixed. And third.” Leaning over the desk, he narrowed his eyes on a squinty-eyed Jeff Bellmoor. “Totaled?”

Jeff winced. “Fine. That’s maybe the wrong word.” Uttered so begrudgingly, it was a miracle he managed to say the words at all. “But like I said—it’s not about the damage.”

A huff of exasperation escaped Mika and he threw his hands up. “I don’t know what that means.” He hadn’t known then either. 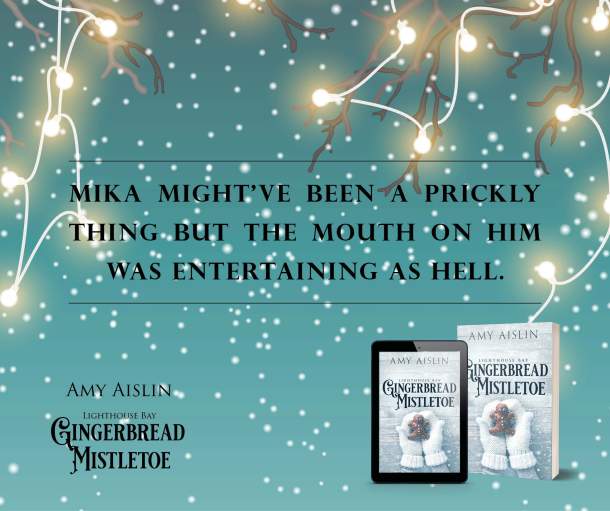 How long have you been writing?
Since I was nine, although I didn’t start taking it seriously until about five years ago.

What made you decide you wanted to put yourself out there to get published?
I don’t know if it was a conscious decision exactly. From a young age, I knew I wanted to write books that other people would read. What made me decide to take the plunge was a submission call by a small publisher a few years ago that I submitted to, and I’ve been publishing ever since.

What was your first published book?
It was a novella called The Play of His Life featuring a second chance romance between childhood best friends. It’s a fun and steamy little read that takes place between Christmas and New Year’s, and it’s in KU!

Is there one genre you haven’t tried but you see yourself writing in the future?
Paranormal romance. I’ve had an idea floating around in my head for a while that I can’t wait to write one day!

What are you currently working on?
I’m working on a college romance between two childhood best friends who become fake boyfriends. It’s fun and sweet and these characters are a lot of fun. It’s tentatively called Keeping Casey. Look for it in late January/early February 2021.

If you write gay romance, just how descriptive are you in their sex scenes?
It depends on the book. My earlier work is more descriptive, however for the last several books, the sex scenes have been more sensuous than descriptive. It’s more about the emotions for my characters than about who’s putting what where. Plus, the amount of detail I go into depends entirely on what’s best for the book. Sometimes a book just doesn’t need any detailed sex scenes.

Would you ever write a hetero romance? Why or why not?
Never say never, but…probably not. I started out writing hetero romance many years ago, but I never loved what I wrote and so I never finished any of those novels. I found my niche with m/m romance and don’t expect to ever go back.

Amy’s lived with her head in the clouds since she first picked up a book as a child, and being fluent in two languages means she’s read a lot of books! She first picked up a pen on a rainy day in fourth grade when her class had to stay inside for recess. Tales of treasure hunts with her classmates eventually morphed into love stories between men, and she’s been writing ever since. She writes evenings and weekends—or whenever she isn’t at her full-time day job saving the planet at Canada’s largest environmental non-profit.

An unapologetic introvert, Amy reads too much and socializes too little, with no regrets. She loves connecting with readers. Join her Facebook Group, Amy Aislin’s Readers, to stay up-to-date on upcoming releases and for access to early teasers, find her on Instagram and Twitter, or sign up for her infrequent newsletter.

a signed paperback of Gingerbread Mistletoe

Today on the blog we have Fly: Goose Girl Retold!

We have A Bend in the River, by Libby Fischer Hell

We have an #excerpt and a#giveaway for Midas Touch

Today we have Violent Beginnings, by C. Hallman &

Today we have The Flame Game, by R.J. Blain, inclu

Come admire the lovely cover of Ruinsong,, by Juli

This morning we have an #audiobook spotlight: The

We have a #coverreveal of Honorable Convictions, b

Help us celebrate the release of BloodLaw by Blais

A psychic thriller that tries to catch an arch ter

Come see Nightwatch, by Annie Anderson. We have a