Welcome to the book tour for Forgotten Scars by Natalie J. Reddy. Today I have an excerpt for you to read and a really amazing giveaway to enter at the end! 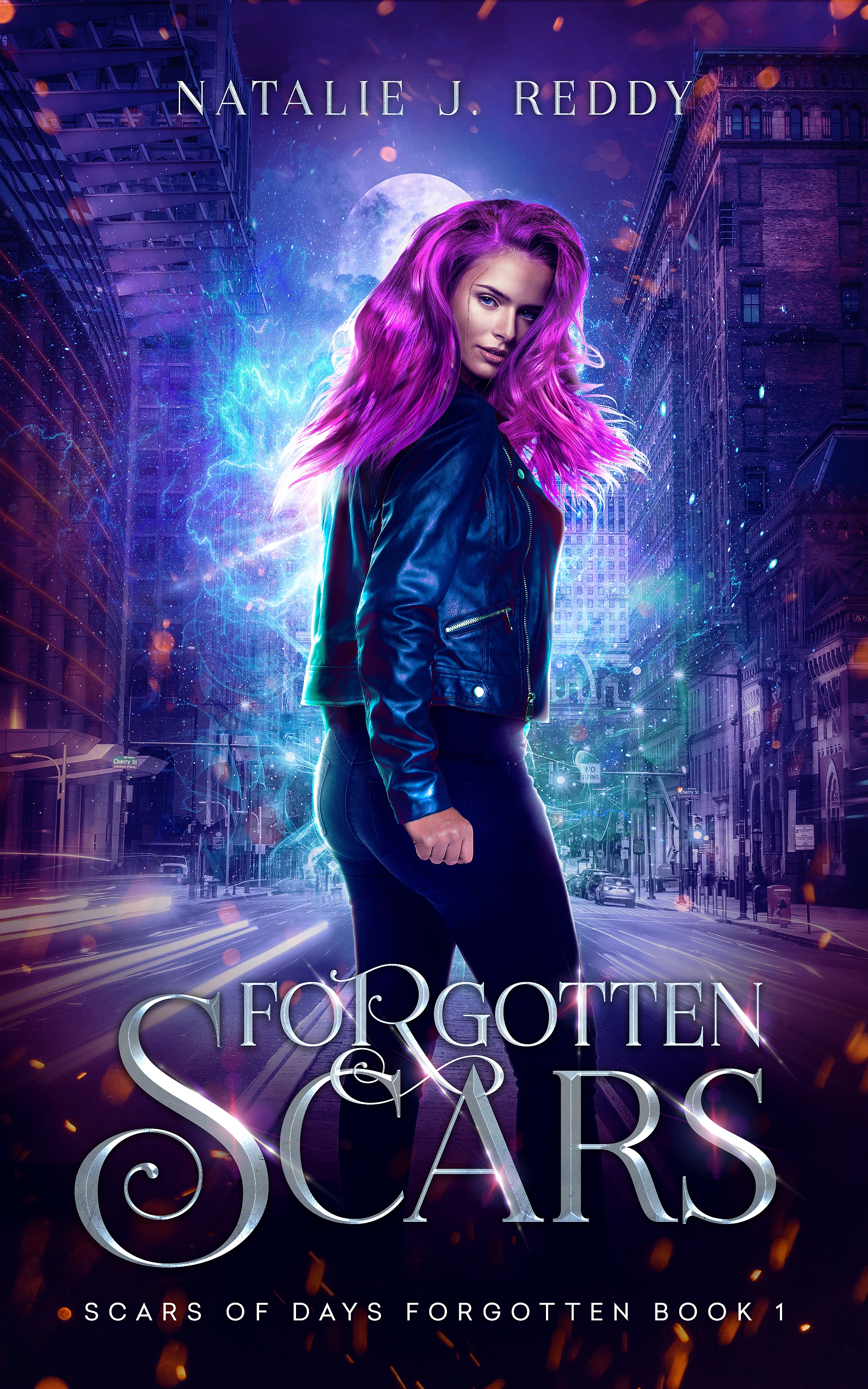 Humanity is not alone. Supernatural beings are hiding among us. The Psi have remained secluded from humans for far too long, and there’s a faction that is conspiring to break the veil and use their powers to take their rightful place among humans – as our rulers and conquerors. Wren is a college student who didn’t think her life could get much worse. That is until she’s kidnapped by the Psi and questioned about her closest friend. But the Psi offer her something no one else can – the truth about who she is. But can she trust the Psi? Can she trust her feelings towards her irritatingly charming captor? Or is she just a pawn in a very dangerous game?

Once the door closed, I flung the blanket off. The room looked like it could be someone’s study or office. I hurried to the windows and yanked open the drapes and the room flooded with sunlight. Daylight! I’d been out for hours!

There were no bars on the windows, but a quick glance outside revealed that I was on the second floor of wherever this was. Climbing or jumping down could be an option. A second story jump wouldn’t kill me, but it would likely hurt like hell.

I groped around the window frame for a lock or way to open it. I found nothing. Hurrying over to the next set of drapes, I yanked them open and found a set of French doors. Behind the glass, I could see a little balcony, and I reached for the door handle.

“Damn it!” The knob moved, but when I shoved against it, it didn’t budge. I shook my head. “People don’t go to the trouble of kidnapping someone, only to leave them in an unlocked room, you idiot,” I muttered to myself. Nothing was ever that easy.

Something heavy—that’s what I needed. If I couldn’t just walk out, I would break out!

I turned, and for the first time, I noticed the fire cracking in the fireplace along the far wall behind the couch I’d woken upon. On a second glance, the room looked more like an old library than someone’s personal office. The walls had deep mahogany wood paneling and were lined with books from floor to ceiling. There was a large matching desk stationed on the far side of the room. The room was almost the size of my entire apartment and was full of plenty of things that looked nice and heavy.

I pushed my mussed hair out of my eyes and walked over to an end table by the couch and picked up a large, very ugly candelabra. I studied it for a moment taking in the fat bronze cherub with its vacant and creepy looking eyes and grimaced. “Who would buy something this ugly?” I muttered as I moved back to the window. I would need to move quickly once the glass broke.

I moved swiftly across the room to the French doors, lifted the candelabra and swung—

“There’s a deadbolt at the top,” a voice spoke, stopping me mid-swing.

I shrieked, and whirled around to see a guy had entered the room. He held a tray in his arms, his lips quirked up in an amused half-smile.

“Um—what?” My heart hammered in my chest at the sudden appearance of someone in the room. How had I not heard him?

“Up at the top of the door.” The guy jerked his chin in the direction of the French doors. “There’s a deadbolt you can unlock if you need to get some air that badly. No reason to break perfectly good windows.” He crossed the room and set the tray down on the coffee table. “Not that you’d break them anyway. They’re made of unbreakable glass,” he added as he poured himself a cup of what smelled like coffee.

I watched as he added heaping spoonfuls of sugar and a dash of cream before heading to the couch, where he sat down like everything was totally normal and took a sip of his coffee. But normal people didn’t kidnap people or need unbreakable windows.

“You can put that down.” He motioned to the candelabra still held tightly in my grasp. “You won’t be needing it.”

The amused smile that hadn’t left his mouth since he had first spoken grew. “I can’t let you leave, but I’m sure you’ve figured that out by now.” He lifted the cup to his lips and took another sip of his coffee.

I tightened my grip on the candelabra, the hard bronze managing to give me a small measure of comfort as I said, “I’d feel more comfortable holding onto this then.”

“Why bother telling me about the lock on the door if you aren’t going to let me go?” I asked.

“Letting you go outside and letting you leave isn’t the same thing.” He set his cup down and strode towards me.

Every muscle in my body tensed as he stopped a foot away. He wasn’t much older than me, and only a few inches taller, but his confidence made it feel like he was towering over my five foot seven inches. The smile had left his mouth as he studied me. His eyes were a light golden brown that could only be described as honey-colored, and they almost glowed against his light brown skin. His hair was a dark wavy mass that reached his collar.

Good looking didn’t even begin to describe this guy. He was the type of subject I’d normally love to sketch or paint, but given my current position, I wasn’t really in the mood. Although my situation didn’t stop me from noticing his strong nose and narrow jaw, or the way his lashes were long enough for a mascara commercial. I couldn’t help it. I saw potential art in most everything, especially beautiful things. And damn it, he was beautiful.

His mouth quirked to the side as if something amused him, but he didn’t say what. He just continued to look at me.

I straightened to my full height, refusing to shrink away. “Why am I here? Or are you not important enough to tell me either?”

He took a step closer, closing the gap between us and leaned in, his face a measly couple inches from mine. “I’m the reason you’re here.” He didn’t move away, and I glared at him.

“You’re in my personal space.”

“Am I?” He smirked as he flicked the end of my nose.

“Don’t touch me!” I smacked his hand away.

His teeth gleamed as he flashed a cocky grin, “Wake up on the wrong side of the bed?” The grin didn’t leave his face, but he took a step back and moved behind the desk. “Come sit down, Wren, and we’ll talk.” He sat in the deep brown leather chair.

The use of my name caught my attention. “How do you know my name?”

He nodded to the chair in front of the desk.

“I’m not sitting until you tell me how you know my name.” I stormed toward the desk and slammed the stupid ugly candelabra down in front of him with as much force as I could muster.

The jerk didn’t even flinch.

“I’m the one who arranged for you to be brought here,” he said. “It helps to find out the name of the people you’re kidnapping.”

He had me there.

“Now, sit down, please.” His words were calm but firm as he nodded once more towards the chair and crossed his arms, waiting.

I complied. For now.

He was silent as he shuffled through some files on the desk. A wiser person might have stayed silent and waited for their captors to speak, but I’d never been accused of ever being especially wise.

He glanced up and folded his hands on top of a manila file. He didn’t speak, he just studied me, his gaze dark and intrusive.

I shifted, clenching my fists so tightly, my nails bit into my palms.

“My name is Darshan, and you’re here because I need something and I’m hoping you can help me.”

“What makes you think I can help you?”

I searched my mind to come up with something, anything that these people might think I could do for them. I had little to offer anyone. I knew that. I wasn’t stupid. But, obviously, he didn’t know that, or maybe I’d been mistaken for someone else?

Darshan leaned forward, resting his elbows on the desk. “I know you can help me, Wren.”

“I swear I have nothing of any value to you.”

“It’s not about what you have, but who you know.”

“What are you talking about?” I shook my head. Who could I know that these people would want?

Darshan flipped open the file and pulled out a photo. He slid it towards me. His face was hard without a hint of humor. “We want to know where this woman is.”

I looked at the photo to see… me. So not a case of mistaken identity, but very creepy. It took me a moment to take in the rest of the picture and notice the person next to me. My eyes widened.

“Her name is Maeve.” His voice pulled me from my thoughts. “But I believe you know her as Wendy, and others know her as a murderer.”

Get it on Amazon 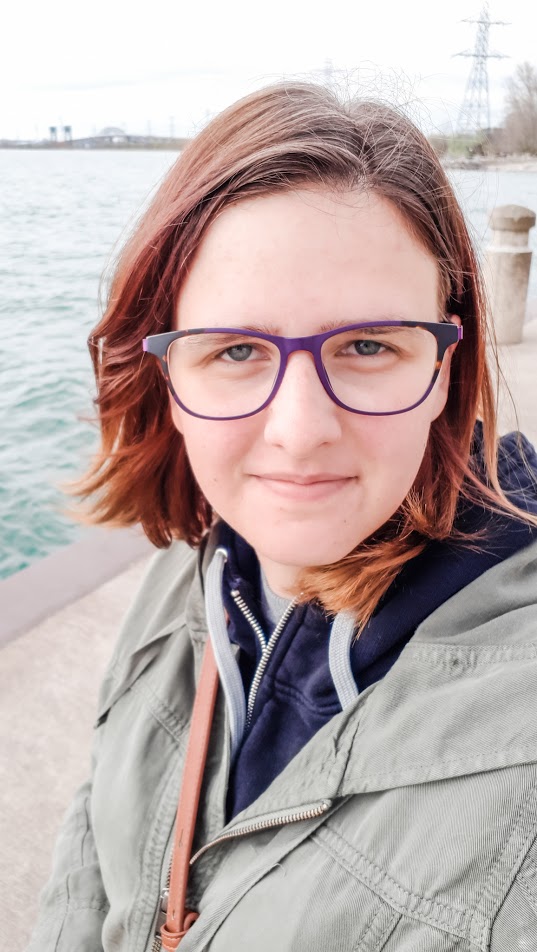 Natalie J. Reddy is a Canadian Author who spends her days trying to escape reality by making up stories about the characters in her head. Natalie realized at an early age that she had a passion for storytelling and that passion followed her into adulthood. There is nothing she loves more than to be pulled into a fictional world whether it’s in her own writing or the writing of others. Natalie is the author of the Scar of Days Forgotten series, a New Adult Urban Fantasy series with characters who have supernatural abilities and dark and sometimes unknown pasts to overcome. When she’s not writing, Natalie can be found having all sorts of real-life adventures with her husband and daughter or curled up with a good book and a cup of tea. To keep up to date on upcoming books, subscribe to Natalie’s newsletter at nataliejreddy.com

Giveaway: Natalie is giving away signed editions of all 4 books in her Scars of Days Forgotten series and artwork inspired by the books! *North America Only Rafflecopter