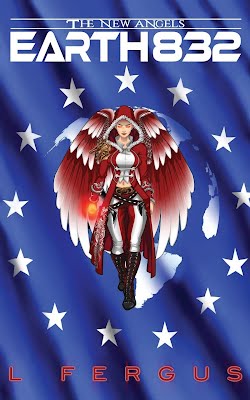 Karen and Zhi are pilots in the elite 154th Strike Fighter Squadron. On a mission to protect the Empire, they’re shot down over the Persian Mountains. Deep behind enemy lines, they discover a new threat to the Empire, SCUD missiles. Out of their element, the two pilots must find a way to destroy this threat before it can launch against the Empire.

Anna was trained by the Soviet Cardinal School to be an assassin. In the process, they took her humanity. Now, she has a new master, one that is putting her skills to the test. She must rise to the challenge and prove she is worthy.

Nicole is one of the greatest snipers in the world. On a humanitarian mission in Kashmir, her platoon is attacked, and she is captured. When she awakes, she finds herself sexually assaulted, and her world shattered. A new identity surfaces, the demon. As she is determined to overcome the trauma, she must learn to control the demon and forge a new identity.

Kimmy is the Empress of the Empire of the United States. She thought she’d been a good mother to her daughter, Chelsea. But when Kimmy’s partner, Kita, is kidnapped, she’s forced to bring Chelsea on the rescue mission. Kimmy learns Kita has done more to prepare Chelsea for life than she has. This realization leads Kimmy to a difficult choice, govern her empire or prove she can be the mother Chelsea needs.

Other books in the The New Angels series:

Kita’s life is one big struggle growing up a lesbian in the conservative Mojave Desert. She’s barely getting by, fighting to hold on to her dad’s failing junkyard—all she has left of him. It’s hard enough being a girl running a salvage yard, if the town found out her sexuality, she could lose more than the yard, she could lose her life.

When three vehicles from a shipment go missing, Kita tracks them down in an abandoned factory where she’s attacked by the evil Neophormes and rescued by their mortal enemies, the valiant biomechanical Velixen. Normally shy and reserved, Kita is enraptured by the aliens’ warrior leader Velositi.

Velositi is on a mission to find the Axiom of Command, an artifact that will save her planet by anointing a powerful leader. And she believes Kita is the key to finding it. The Neophormes have chased Velositi and her team across the galaxy, seeking the Axiom for their own ends. Velositi is ready for danger. What she’s is not prepared for is falling in love with Kita.

“Any questions, ladies?” Karen said, addressing the briefing room of pilots. She stole a glance at the Angel Kita, standing in the back, having arrived partway through the briefing. She wasn’t dressed as the Vicereine, so she wasn’t here in an official capacity. Probably checking in on her favorite pet project.

A hand went up. “What if the rest of the Navy doesn’t show up after we bomb them?” said Harlequin. “I don’t remember run like hell being taught in Angel School.”

The other pilots laughed. They were all graduates of the elite Superior Air Tactics and Combat School Karen helped Kita establish a year ago. The punishing sixty-day course pushed pilot and machine beyond their limits. The school’s washout rate was ninety-nine percent and already claimed the lives of seven pilots. Graduates earned more than a tab for their jackets. They received the basic Angel package—a bionanite injection that increased their physical and mental stamina and gave them special abilities like regeneration, super strength, enhanced vision, and invisibility.

Karen didn’t think it was funny. “If you run, I’ll shoot you down myself. You only bail if we run out of missiles and bullets.”

“Forget running,” said Anastasia, a pilot from Ukraine. “I crash plane into them. If they survive, I kill them with bare hands on ground.”

“That’s why you have a pistol,” said Pepper.

“Beat them with rock.”

“Ok, ladies, we have ninety minutes until we cross phase line x-ray. Get to your fighters.”

The pilots gathered their tablets and helmets and climbed the steps out of the briefing room. Each gave Kita a nod as they went by. Karen went last with her wingwoman, Shen, a new pilot from China. Kita stepped in front of them as they reached the top.

“Hi, Karen,” said Kita from under a large hood that hid her face.

“Hey, Kita. No problems to report. Everything is a go.”

“I prefer they not kamikaze the planes,” said Kita. “The technology in them is beyond classified.”

“I will tell them to make sure, but I think she was joking.”

“Call me Kita. Save the pleasantries for when I’m Vicereine.”

Shen looked confused. “You plan to be Vicereine someday?”

Kita chuckled. “No. I am the Vicereine, but only when I wear the dress. I prefer my day job as an assassin. How are you adjusting to the fighter, Shen?”

The 154th Strike Fighter Squadron flew customized versions of the F-22 Raptor. It was faster, turned harder, out-climbed, and was more heavily armed than any other fighter in the world. The wings were fitted with gravity wells allowing for higher speeds and high-g turns that would kill a normal pilot.

“It’s a superb aircraft. I will get many kills.”

Kita smiled. “The sky will be full today, but I’ll leave that to you girls.”

The door opened, and Empress Apocalypse entered. She pushed her hood back and stuck her face in Kita’s hood to get a kiss. “Hey, angel. Chelsea’s down for her nap.”

“No fight this time?”

“The swaying of the ship helps. We should find a bed that rocks. Hi, Karen.”

“Hi, Kimmy.” Karen had spent the last eighteen months living with the Angels. She was at ease with them, even Apocalypse. When Shen moved to kneel, Karen pulled her elbow to stop her.

“This is Lieutenant Zhi Shen. She joined the Fallen Angels three weeks ago.”

Apocalypse laughed. “You’re one of Kita’s girls; call me Kimmy.”

“How is Chelsea?” said Karen. “I haven’t seen her in months. She must be huge.”

Apocalypse elbowed Kita in the middle. “What she means to say is she is adorable and is getting bigger all the time. After the mission, you’ll have to come see her.”

“You have a child?” said Shen in surprise.

“Closely guarded secret,” said Apocalypse. “I was only pregnant for seven weeks. No one noticed when I disappeared for a month.”

“Last I saw her, she looked like a little cherub,” said Karen.

Apocalypse gave Kita a loving look. “The sociopath hasn’t warmed up to her yet. You should see her trying to hold Chelsea. The look on her face is utter terror.”

“She could erupt at any moment. I don’t want to be covered in baby puke.”

Apocalypse rolled her eyes. “It wipes off.”

“Anyway, is the mission ready, Karen?”

“The only thing left to do is drop the bombs and pile up the bodies.”

“Excellent. This will be a good warm-up for our forces. Europe is protesting my declaration of world nuclear proliferation.”

The networks had played the thirty-minute speech repeatedly for the last week. Apocalypse’s simple message was only the Empire of the United States would be allowed to have nuclear weapons. All others were to be handed over, taken, or destroyed by force.

“Have they gone on alert?” said Kita.

Apocalypse shrugged. “So far, no. I told their ambassadors that we would be running military exercises around the Middle East. They protested, but that’s all.”

As an Angel, Karen knew some of Apocalypse’s plan. The first step to conquering the world was to eliminate the rest of the world’s nukes. France, the UK, Germany, Spain, Italy, Sweden, and the Arab Alliance were the only countries left. Europe was deemed a minor threat. The unpredictable religious dictator that led the Arab Alliance was the top priority and the target of today’s mission. Karen and the Fallen Angels, the 154th’s nickname after the Battle of Moscow, were to go in and bomb the facilities and silos, removing the threat.

“Kita and I will be observing in the VIP Combat Information Center,” said Apocalypse. “If you have any problems, contact us.”

Nothing like having both your bosses looking over your shoulder. “I don’t see any problems. Everyone’s concern is getting back out, but I know the rest of the Navy will meet us in the middle.”

“Don’t try and take the Alliance’s air force on by yourselves,” said Kita sternly. “Blast through to friendly lines. I know your pilots are itching to fight, but you’re no good to me dead.”

Karen bowed her head. “Yes, Kita. I will make sure they know.”

Kita touched Karen’s upper arm. “We can’t win the war today, so now is not the time for foolish risks. Planes can be replaced. You can’t.”

Karen never dared to ask Kita how old she was, but she always spoke with wisdom and experience. “I’ll make sure everyone comes home.”

“There will be plenty of air battles in this campaign,” said Apocalypse.

It’s like they don’t want us to kick ass. We haven’t trained this hard not to. “The squadron will be ready.”

“I know,” said Kita. “That’s why I put you in charge. Now, go lead your squadron to glory.”

L. Fergus is an Amazon Bestselling author with Birthright and Rebirth. Both titles were #1 new releases in LGBT Science Fiction. Before Amazon, L. was a Wattpad Featured Author and #1 writer of science fiction. The Fallen Angel Saga has more than four hundred thousand reads. The books Birthright, BykeChic, and Rebirth have won over twenty awards, including Best Overall.

If you want the most up to date stories consider becoming a patreon at www.patreon.com/FallenAngelKita