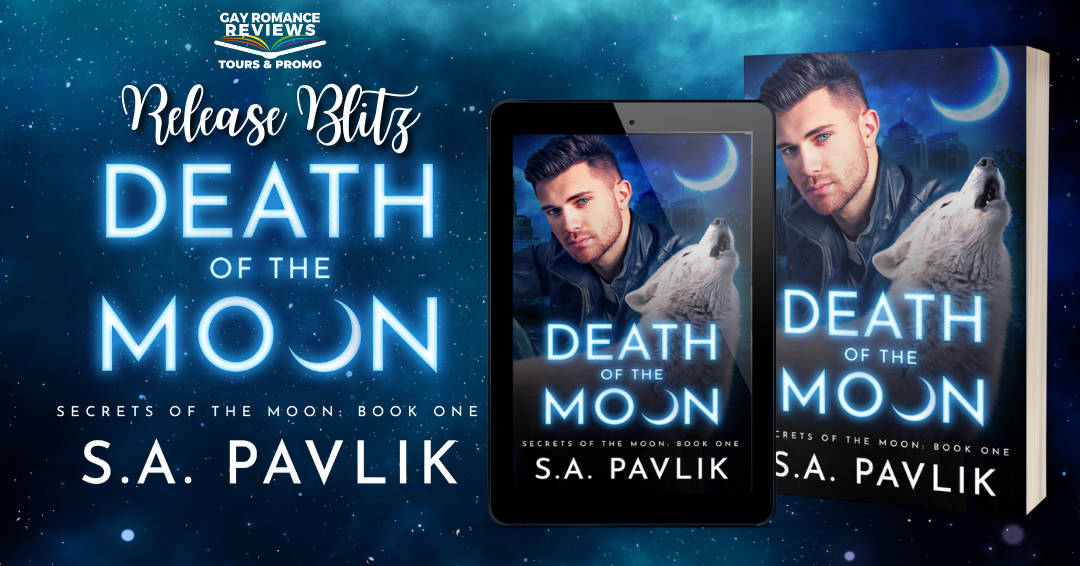 A werewolf with secrets.

Alec Channing has lived a long life, going through the motions, lost in his troubled past, until fellow shifters start dying around him. An increase in werewolf attacks only adds to Alec’s problems. As his past closes in, his only hope lies in one man—an unaware human whose vanilla and spice scent and easygoing attitude draw Alec in. However, what happens when that man uncovers the truth about Alec’s world?

A homicide detective out of his depth.

Detective Damien O’Connor joined the Columbus Police Department to bring closure to victims and their families—closure he never got for himself. But when none of the evidence adds up for what should be a routine death investigation, he’s floundering. As the bodies pile up, the sweet man who caught Damien’s eye falls in the center of the storm. When secrets come out, can Damien reconcile his new reality and solve the case?

Death of the Moon is book one of the Secrets of the Moon trilogy, an 83k word M/M Paranormal Crime/Mystery Romance, with an HFN ending. While there is a complete story arc in this book, there are plot threads that will carry on throughout the trilogy. There are language and explicit intimate scenes not suitable for readers under the age of 18. Warnings: MC with PTSD, past torture implied through flashbacks, dealing with grief.

“You don’t even have a television.” The pout in Collin’s voice was rather sad.

Pinching the bridge of his nose, Alec sighed. He didn’t really have the need for a television and rarely had guests aside from Ari. He didn’t make it a habit to mentor other preternatural creatures in his own home.

Maybe it was time to change that.

He could introduce Collin to one of his favorite radio dramas. “Grab yourself a drink and have a seat. Alexa, play War of the Worlds from my library.”

When the intro started playing, Collin groaned. “Really? You’re going to make me listen to this?”

Alec held a finger to his lips. “Just wait.”

When the program had first aired, he and Ari had been living in New York City. They’d spent months calming down the preternatural community afterward. Every creature that had reached out had been afraid the humans planned to pull together a militia to hunt them down.

Collin’s complaints grew silent when the announcer interrupted La Cumparsita to describe a series of explosions observed on Mars. As soon as the music started again, however, the kid acted like Alec was trying to torture him.

This generation had no appreciation for the classics.

The scent of miso soup followed Ari into the apartment just as the intermission started. Her sigh was a little dramatic. “Really? Did you not get enough of this nonsense when the trolls started demanding asylum in Canada? Alexa, pause the program.”

Alec grinned at the memory. At least he wasn’t the one who had ended up dealing with those particular trolls. “I was just trying to broaden Collin’s horizons. Not all entertainment comes in the form of TV.”

“What about all those audiobooks I got for you?”

Collin choked on his drink. “She got you what?”

“Well, it is not like he has his own love life.”

Heat rushing to his cheeks, Alec lobbed one of the throw pillows from the couch in her direction. He smiled when she huffed at him. Served her right for buying him so many fecking pillows.

To celebrate the release, S.A. is giving away a paperback copy of Death of the Moon!

S.A. Pavlik writes what she wants to read, but it doesn’t exist… yet. An avid reader, she first discovered and promptly devoured hundreds of M/M Romance novels in 2019 and it rekindled her desire to write. She started her debut novel, Death of the Moon, the very next year.

She was born and raised in Wisconsin where it’s too cold but she loves it there anyway. She lives with her husband and her furbaby—a needy, elderly, deaf cat named Rise (Ree-say). Because who uses names that are instantly pronounceable? When she isn’t reading or writing, she’s obsessively playing video games or proving that an introvert can be an extrovert on the internet after all.

One Reply to “Book Blitz, Excerpt & Giveaway: Death of the Moon, by S.A. Pavlik”