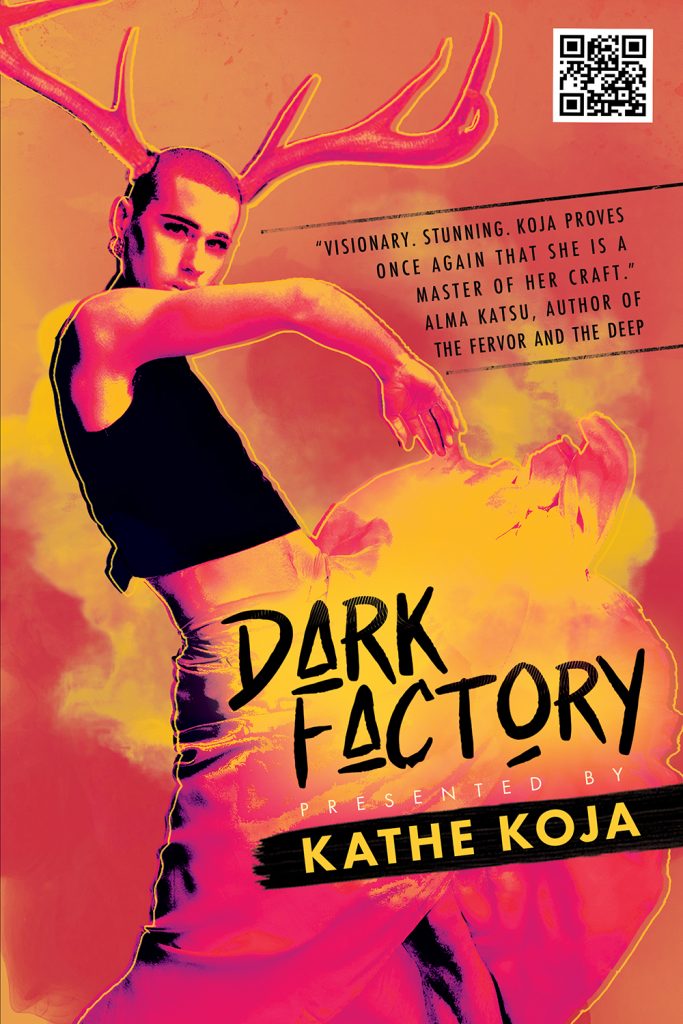 Dark Factory is a dance club: three floors of DJs, drinks, and customizable reality, everything you see and hear and feel. Ari Regon is the club’s wild card floor manager, Max Caspar is a stubborn DIY artist, both chasing a vision of true reality. And rogue journalist Marfa Carpenter is there to write it all down. Then a rooftop rave sets in motion a fathomless energy that may drive Ari and Max to the edge of the ultimate experience.

Dark Factory is Kathe Koja’s wholly original new novel from Meerkat Press, that combines her award-winning writing and her skill directing immersive events, to create a story that unfolds on the page, online, and in the reader’s creative mind.

Join us at DarkFactory.club. The story has already begun.

“Ari! Hey Ari, how’s it going?”
“Hey,” his nod to the skinny DJ on the bench opposite Jonas’s office, blue glass walls half-covered with overlapping Dark Factory posters, the effect is like peering into a paper aquarium. “It’s going good. Tight.”
“I just got in from Chromefest, I played some crazy great shit,” the DJ digging into his bag, a dangle of fake gold giveaway charms, too many stickers, TOOT SWEET, U DONT REDLINE U DONT HEADLINE, pulling out a mix stick. “You got a minute?”
“Got a meeting,” with a shrug, a smile, his public smile—
—but inside the office no Jonas, only his spoor: empty NooJuice cans, Causabon trainers still new in the box, a white dinner jacket hung on the hulking recliner, and between the tilting piles on the blue glass table that is Jonas’s desk, two burner phones, both vibrating like wind-up toys: Ari takes up one, then the other, neither are numbers he knows. Also on the desk is a flat delivery box stacked with t-shirts, a new streamlined design, and “Y makes the logo move,” Jonas at the door, slamming the door, Jonas wearing last summer’s t-shirt, black and sleeveless beneath a clear plastic wrap jacket; with his hair sheared at the sides he looks like a brand-new cleaning brush, Ari hides a smile. “Lee thinks it’s too subtle. What do you think?”
“Not if it moves,” an answer and a parry, Jonas likes to test everyone, Ari most of all. “Chockablock thinks of everything.”
“And overcharges for everything too. Wear it around, see what people say,” and as Ari drapes a shirt around his neck, “I know it’s your day off, but I need you in the box tonight.”
“Just me?”
“You and whoever else I stick in there. Be good, or it’ll be Lee.”
“I don’t have a problem with Lee.”
“That’s not what she says.”
“Then that’s her problem.”
“True. Got a smoke? Darcy’s after me to quit,” as Ari offers one of the black blunts he gets from the boys in the clubs, Jonas rooting in the desk’s mess for an ashtray, and “Lee said,” Jonas’s shrug half-annoyed, ”some woman gave birth on the floor last night? To an actual baby? What a mess.”
And Ari laughs—“The Factory’s first natural-born citizen”—and after a moment Jonas laughs too: “Your brain, Ari, your fucking brain,” pulling out his real phone, a quick dictating bark, “Lee, find those baby people, give the baby free admission for life. Tell Media to make a big deal out of it—”
—as Ari exits in a puff of smoke and a flutter of posters, past the still-waiting DJ, and two runners toting scent canisters like oversized silver bullets, another runner wrangling a wobbling rack of boxed NooJuice, provided to the production in exchange for ad placement, another of Ari’s ideas that Jonas approves, Jonas drinks half a dozen cans of that swill a day. Lee drinks it too, though Ari knows she hates it; sometimes he catches Lee studying him when she thinks no one can see.
In the performers’ lounge he slips on the new t-shirt—a little loose across the chest, he likes his shirts tighter—smooths back his hair, then heads for the NOT AN EXIT sign over the loading dock doors: a delivery van rolling out, another just backing in that he sidesteps, out to the street, Neuberg Street . . . A teenager, the first time, he came here to drink cheap lager and fuck and dance to loud music with boys—he still fucks and dances, but Jonas has taught him something about wine, so he drinks that instead, chilled and white, it pairs nicely with the blunts—sixteen then and wide open, new to the scene, new to joy: his look changed, his slang, even his walk, more swagger, more aware of his body as he roamed past the schnapps bars and phone stores and crumbled brick alleys, the corner charging stations shaped like top hats where the boys hung out, flirting and sparring in the noise of sidewalk speakers and the whirring purr of the trains, the muezzin’s call floating over avenues of beech and linden trees and the black-washed façades of the remodeled industrial flats, cafés hot with espresso and frothing oat milk, and the clubs’ 4 a.m. aroma of lager and latex and Club-Mate, dancing panting bodies, moisturizer and tobacco and tears. And now these streets are his streets, he lives in one of those expensive flats, he has everything he wants in this world, almost everything.
The October sky is overcast as a tarnished mirror, heat still radiating from the pavement, he stops at a Kaffee Kart for an iced espresso and “Your shirt’s really cool,” says the freckled barista, as Ari records her reaction for Jonas’s eventual benefit. “Dark Factory! I’d go every weekend if I could, it’s like the world if the world was perfect. You go a lot?”
“I go every night. I work there.”
“You work at Dark Factory? Oh cool! What do you do?”
And Ari smiles, because there is no name for what he does, what he is, what Jonas needs most, what Lee for all her stats and apps and 24/7 devotion can never be: the bridge between the Factory and the world, a native of both because “I’m the ambassador,” he says, and lifts his cup to toast—the barista, the Factory, his job, himself—as a sudden gust of steam surrounds him, like a saint’s silver halo, or a personal storm.

1. Tell us a little about how this story first came to be.
All my books start with a character, someone I see in my mind’s eye, wonder over, consider; then that character opens the door to others, to their world, and to the book. For Dark Factory it was Ari Regon, wild hair and that smile, this guy was clearly out to have some fun. So I followed him.

2. What, if anything, did you learn when writing the book?
Oh, what a great question. I learned that my immersive event work—I’ve produced and directed over twenty live performance events, in places like galleries, museums, a Victorian mansion, a historic church sanctuary—could merge with my writing, and people could be invited to interact with a book the same way they do at the live shows: immersive fiction! And Meerkat Press was one hundred percent collaboratively involved with the concept, creating the Dark Factory site to invite readers into the story from the jump.

3. What surprised you the most in writing it?
How BIG it was. It was a world that knew exactly what it wanted to be, and do—just like Ari, whose role in that world is as producer extraordinaire, always looking to create the unforgettable night—and just kept growing and morphing. That’s one reason it took me twice as long to write Dark Factory as any of my other novels, over three years.

4. If it’s not a spoiler, what does the title mean?
It has more than one meaning, but Max Caspar explains it better than anyone.

5. Were any of the characters inspired by real people?
None of the characters in the novel, but there are more than a few real people interviewed by Marfa Carpenter/McSq2 on the site: a tattoo artist, several professors, an arts journalist/editor, a sound designer, a ministry worker, all of them offering their real thoughts and opinions on life, art, and their own fields and disciplines. Immersive again.

6. Do you consider the book to have a lesson or moral?
That reality is a state more amazing than we ever believed.

7. What is your favorite part of the book?
Impossible to answer this one! But I do love the push-and-pull interactions between playful Ari and serious Max, on pretty much every topic, from the meaning of life to soba noodles.

8. Which character was most challenging to create? Why?
Definitely Marfa—her changes over the course of the novel took me by surprise, but looking back, those changes were always there, always part of who she was and could become. That’s the way for all of us, though, all the potential selves we could be, that we make with our choices, every day.

9. What are your immediate future plans?
We have multiple launches and events scheduled, into June and beyond, and new fan content coming for the site. So it’s all Dark Factory for now.

ABOUT THE AUTHOR: Kathe Koja writes novels and short fiction, and creates and produces immersive fiction performances, both solo and with a rotating ensemble of artists. Her work crosses and combines genres, and her books have won awards, been multiply translated, and optioned for film and performance. She is based in Detroit and thinks globally. She can be found at kathekoja.com. 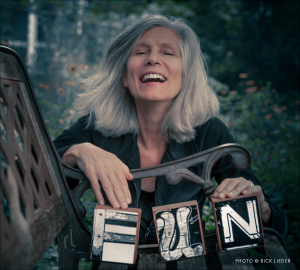