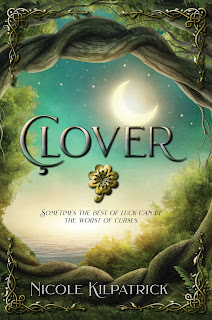 Sometimes the best of luck can be the worst of curses.

When a handsome leprechaun reveals himself to Clover O’Leary on her eighteenth birthday, she is faced with three hard facts. One: he is the reason for her remarkably charmed life; Two: her luck has now taken a turn for the worse. Three: her name is a curse; a malicious gift from the powerful leprechaun who named her while she was still in the womb.

In order to get her life back and undo the evil spell, she must travel to Ireland to seek the only creature who may be able to help: the Seelie Queen. With her intriguing leprechaun in tow, Clover crosses into the Faerie Realm, where fairies and mythical creatures abound and where finding her luck may ultimately lead to finding her love.

Excerpt from Chapter One:

The room smelled of sweat, cigarette smoke, and a tad bit of spilled beer drying on hot concrete. The stench of inebriated desperation was palpable. Theirs hadn’t been the only poker game when Nick O’Leary first came into the gambling den, but now everyone had gathered around their table to watch. Everyone looked so strange to him all of a sudden, as if his frayed nerves had somehow made everything sharper and more focused. The lad in the pale blue suit, too handsome. The lady who smelled of lilacs, what was up with those ears? The whole lot of them seemed caricatures of their former selves, and in the center, staring at him with the greenest eyes he’d ever seen was Alistair.

“I don’t enjoy waiting, my friend.” He smirked as he theatrically drummed his fingers on the table.

Alistair wasn’t Nick’s friend at all. He had just met the guy that day at a Las Vegas casino. He had cajoled him into a private poker game, and Nick had been too much of a gambler to resist. There was something about him that was hard to say no to. He was expertly groomed, immaculately dressed, and extremely good-looking, and yet for all these attributes, he somehow looked out of place. He was like a Picasso in a sea of wallpaper. Nick found himself wanting to be in the man’s presence.

Next thing he knew, Nick was in a gambling den ten blocks off the strip, in what would appear to be an oddly high stakes game of poker, face to face with the mysterious Alistair.

“See, I’m not sure I understand,” Nick stammered.

“It’s quite simple really. We’ve, shall we say, upped the ante? Money is so passé nowadays, don’t you think? My preferred currency is luck.”

The last word drew a collective gasp from the now captivated crowd.

“Look, I really don’t know where you’re going with this…”

“Pretend that I may give you luck and pretend that I too may take it away. Upon this premise, my friend, we shall place our final bets. If you win, I am prepared to offer a lifetime of providence. If I win, you will surrender said providence to me, commencing immediately until the day of your death.” 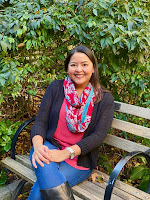 Nicole Kilpatrick was born and raised in the sun-kissed Philippines islands, but now works and lives in the asphalt jungle that is New York City. A lifelong lover of books, she read the Godfather when she was twelve and instantly fell in love. While she still enjoys the occasional gangster novel, she has since discovered her true passion in young adult fantasy. Mario Puzzo was quickly replaced by J.K. Rowling in this author’s heart.

When not writing, she can be found lounging in a cabin by a river, curled up at home reading a book, or concocting recipes in her cozy kitchen in Brooklyn, where she lives with her husband. Clover is her debut novel. 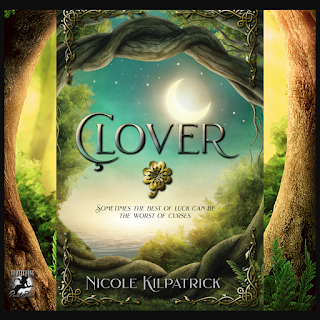