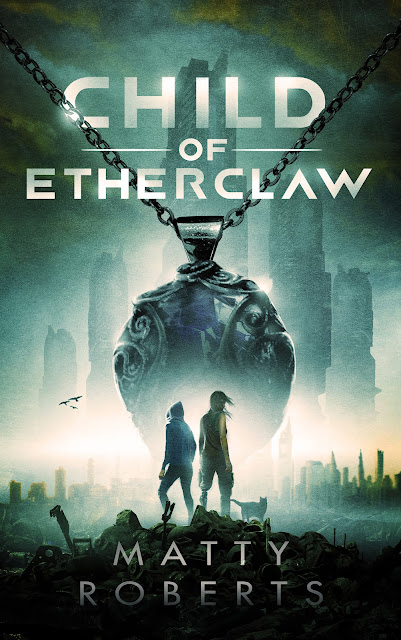 But can those bonds hold when the blood itself carries a devastating secret?

Fenlee’s opal necklace had always radiated a certain warmth since her mother’s death. But now, at sixteen, her world begins to unravel as the stone sparks to life, revealing itself to be an otherworldly artifact of untold power.

Between her mechatronics studies at the academy and scavenging expeditions beneath the sprawling city of New Cascadia, Fenlee and her
adopted brother, Elliot, try to decipher the mysteries of her necklace and its link to events in Fenlee’s past.

But they’re not alone in their search.

Strange undercity dwellers offer cryptic warnings, drones track their movements, and deadly corporate agents lurk in the shadows. When tragedy rips Fenlee’s family apart, she must learn to use the artifact’s power to save those who are deeply precious to her. But nothing can prepare her for the dark truths that she will uncover on that journey…

Is Child of Etherclaw your first novel? What else have you written?

Yep! It’s my very first novel. Well, it’s the first novel I’ve had enough confidence to release, at least. There are a handful of novels that I’ve scrapped and short stories that won’t see the light of day. I’ve also done a lot of other writing over the years, but most of it is either a bunch of cringe-fest fanfic, or is best left buried in the shadows where we shall not speak of it. It took me quite a bit of writing to get to a point that I felt I’d produced something I wanted others to read. Even still, it’s incredibly nerve-wracking putting it out in the world for real.

I’d have to say that Nico was probably the hardest character to write. He is a boy of very few words, and the reader doesn’t get benefit of understanding his thoughts from his POV, so I had to figure out ways to convey meaning and personality with very little. Nico grew up without parents or any true caretakers, but is far from emotionally stunted—he probably displays the most empathy of any of the characters. At the same time, he’s not very well socialized. Balancing that combination on the page was tricky, but fun, and I’m happy with how he turned out. Nico is one of my favorites.

Fenlee Harper was probably the easiest for me. She is the lead character and I felt I could identify with almost all of her feelings and actions. Her dialog was often too much though, and I did need to trim it in quite a few places. Once she gets going, Fenlee does love to talk. She’s also the character that had been lurking in my brain the longest prior to writing Child of Etherclaw, so I already knew her fairly well.

Child of Etherclaw is set in the Pacific Northwest. What made you decide on this setting?

I was trying to determine what areas of Earth would likely be places where humanity would consolidate in a post-climate change world. There is no telling how all of this would shape up in reality, but it seems that the Pacific Northwest region of the United States would be a likely candidate, given its current climate and many of the climate change forecast models.

New Cascadia is a city-state spanning what is currently northern Oregon and most of western Washington state. This seemed a fitting region for the development of a sprawling megacity up and down the coast that would begin to grow vertically as more climate refugees found their way there, and as the sea level would rise.

I had also hoped to be able to describe New Cascadia in such a way that the megacity became something of a character itself.

What do you hope readers take away from Child of Etherclaw?

Child of Etherclaw has been described by several reviewers as a cyberpunk dystopian thriller. I think that’s a totally appropriate description, but it initially surprised me. While writing, I had set out to create a story of found family, emotional character growth, and hope against all odds…that just happens to be against the backdrop of a cyberpunk dystopia. And, yes, as the story gets going, it does take on a thriller quality. Totally fair description.

Child of Etherclaw is the first in a new series. How is the next book coming, and when can we expect it?

Book 2 is coming along very well. While Child of Etherclaw doesn’t exactly end on a cliffhanger, there are a number of smaller loose threads that I will be tying up in the second book and additional mysteries and open questions that will be answered. The story also gets moving right from the beginning. As of now, I’m anticipating a late 2023 release. 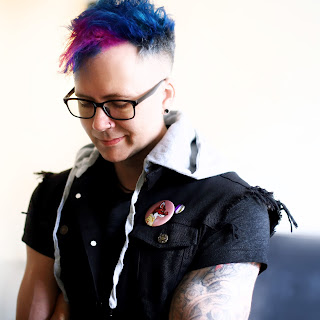 Meet the Author:Matty Roberts began their career in journalism where they earned an Emmy and had the privilege of working on several other award-winning projects. They hold an MS from Johns Hopkins University and are now an engineer in renewable energy in Denver, Colorado where they live with their wonderful partner, two extraordinary kids, and the best doggie ever. In addition to writing, engineering, and parenting, Matty is a vegan enby nerd who is in love with this world and will forever be doing all they can to make it a better place. And they may be known to occasionally play in a punk band here or there.