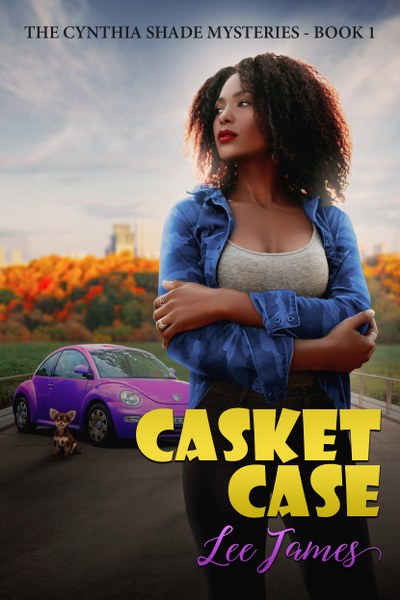 Cynthia Shade. That’s her name. She has ADHD and cynophobia. That’s just a fancy way of saying she’s terrified of dogs. Not all dogs mind you, just the tiny ones that come at you with their razor-sharp fangs and frenzied eyes. To make it worse, she can’t find a job, rather, she can’t keep a job, and she’s about to be evicted. Just when she gets a glimmer of hope she’s blackmailed into trying to solve a murder.

Cue the handsome sheriff who awakens real interest in perpetually single Cynthia, and a cast of crazed suspects. One of whom is determined she doesn’t make it out of this adventure alive.

That was also her.

Cynthia pressed her lips together as she scanned the rest of letter. “Power’s gonna be turned off.” She crushed the warning from P&E Electric into her canvas bag.

“You still want your balance?” The bank teller kept his tone professional but his bland blue eyes didn’t meet hers. If he’d heard her, he gave no sign.

She nodded, remembering where she was. “Yes. Please.”

He slid the printout across the counter and she stared at the circled amount.

“Thirty-seven cents? Is that right?”

He leaned over, just enough to acknowledge the question. “Must be.”

Disdain flickered across his baby smooth face before he turned his back on her to stare out the window.

She followed his gaze to the Volkswagen parked outside, and saw it with a stranger’s eyes. Rust lined the bottom edge of the little purple Beetle. And where the rust ended, the scratches and dents began. These made it all the way up to the roof, where the chipped paint had long since lost its luster. A spidery crack spiraled out from the bottom half of the windshield. From this vantage point, her faithful ride was a homely representation of personal transportation. Heat flooded her cheeks.

Probably. She shrugged. “I dunno.”

“We just got the parking lot resurfaced. Wouldn’t want to junk it up all ready.”

Junk it up? A teller would have no reason to care about something like that. It was just another unnecessary insult. Her lips wobbled as she crumpled the printed bank statement into her canvas bag. It could sit there along with the past-due gas bill and the latest threatening letter from her landlord. If they got lonely, they could commiserate with the termination letter from State Farm telling her she no longer had car insurance.

“If there’s nothing else, I need to be able to help other customers,” Tyler said.

Cynthia glanced around the empty bank lobby. Even the offices of the bank manager and assistant manager were empty. She cocked an eyebrow, but Tyler averted his eyes as he busied himself behind the counter.

Taking the hint, she shuffled across the lobby and pushed the heavy doors open. Hot, liquid sunshine hit her head and melted between her shoulder blades. Heat from the pavement burned through the bottom of her flip flops. If she didn’t keep moving, the thin plastic would start to melt. But that was the least of her problems. She dug out her phone with trembling fingers.

Cynthia took a deep breath. She wasn’t going to cry.

“Swan’s Temp Service,” a familiar, husky voice answered on the second ring. Renee’s voice cracked under the weight of a two pack a day habit, punctuated by a cough that could have doubled for a steamboat’s horn.

“Renee?” She swallowed again. “This is Cynthia Shade.” She paused a moment, but the other woman didn’t respond. “I…uh…was just wondering if you had work coming up. Something that I can do.”

“Cynthia? I-No, honey, I don’t have anything for you right now.”

Cynthia wasn’t surprised. Renee hadn’t had anything for her since “the incident.”

Renee sighed. “Cynthia, honey, it’s hard to place you. I mean you’re a good worker but I need someone reliable. I know this is a temp agency, but my clients have a reasonable expectation that the people I send will at least stay through a work day.”

“Please, Renee,” she gripped her bag, the crumpled threats crinkling as she did so. “I need work right now.”

“I don’t have anything for you.” Renee sighed again, then bellowed a cough into the phone. She paused a moment. “Dripping Springs is a small town and you know how people talk. After what happened at the accountant’s office, it’s hard to get clients to take you on. I’m sorry,” she said simply. “I just don’t have anything right now.”

“I understand.” Cynthia wiped away hot tears, now mingled with sweat, trickling down her face. “Thank you.” She hung up the phone and pulled out her car keys.

Gritting her teeth, she stuck her key into the driver-side door of the purple VW Beetle. It didn’t budge.

Gritting her teeth harder, she planted her feet and turned the key again. This time the lock clicked, but she wasn’t fooled. Cynthia jiggled the key a few more times before the lock slide up and she was able to pull the door open.

She ignored angry slash in the seventeen year old leather as she tossed her bag onto the passenger seat and half fell behind the wheel. She sat there, panting in the heat for a moment. The battle was only half won. Since the panel was missing on the driver’s side door, the only thing she had to grip was the window knob and she didn’t want to snap that off as well. Instead, she rolled down the window, and grabbing the door with both hands, slammed it shut. She didn’t bother rolling the window back up. At ten-thirty in the morning, it was already ninety-three degrees and the Beetle didn’t have air conditioning.

Her phone buzzed on the seat and she glanced at it, preparing to ignore whoever it was till she caught sight of the caller id.

Cynthia glanced around the interior of the car. No sense in complaining. “I’m good, Uncle. What’s going on?”

“Can you come over to the house I got somethin’ to show you.”

She sighed and gripped the wheel.

“You’ll gonna love this. I promise,” he cajoled.

She was hot. She was tired. But this was Uncle Garrett. The bacon to her eggs. The Abbott to her Costello. Cynthia nodded even though he couldn’t see her.

Cynthia dropped the phone and hesitated briefly, sending up a silent prayer as she turned the key in the ignition. The engine barked and sputtered, but after a moment it roared to life. Cynthia wiped at the sweat pooling on her brow and sighed in relief. Something was going right!

She caught a glimpse of the gas gauge and the short burst of relief faded. The gauge was very close to the red E. She studied it with a practiced eye. If she didn’t make any unnecessary stops, she could get another ten miles out of it, easy. It was going to be ok. Catching a glimpse of herself in the rearview, her eyes brimmed with tears. She would not cry! 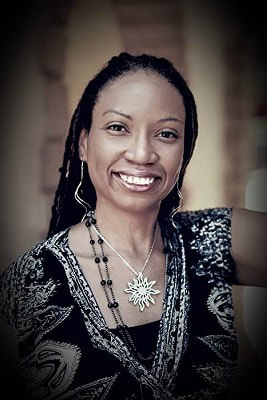 Lee James writes stories of hope and redemption. Whether it’s fantasy, mystery or historical fiction, her beautifully awkward characters traverse a dark labyrinth on their journey to a hopeful end. She is vehement about the importance of creating and preserving the sanctity of the written word. In that vein, she supports literacy programs and her local libraries. Most importantly, she supports her fellow writers. When not writing, she enjoys photography, watching The Simpsons, and of course, reading.