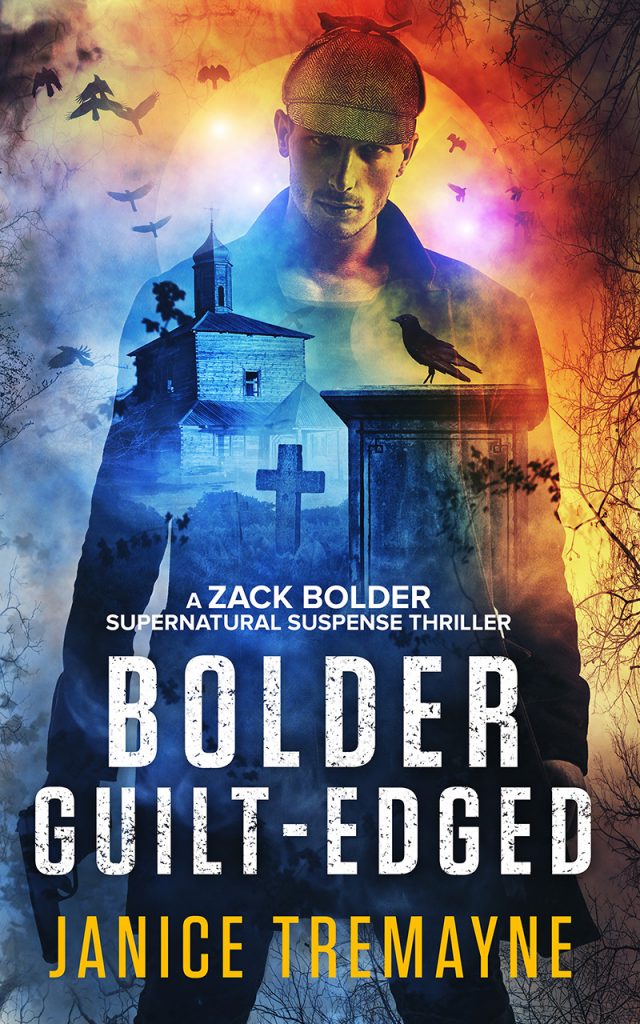 A demon hell-bent on playing psychological games to torment its victims. A guilt-edged past comes to the fore to be relived again. Can Bolder overcome his mental suffering and destroy the voracious demon?  In the Australian ghost town of Ravenswood in North Queensland, a gruesome suicide occurs after the famous annual Halloween ball. Bolder is called in by Detective Wellock to help track the evil incarnate responsible.  However, has Zack Bolder met his match? Can a trained parapsychologist by the Church withstand the guilt-edged torments of the demon? This poltergeist dangles psychology as its weapon by tempering that frail part of the mind to those that get in its way. Bolder is taken back to relive dark secrets—ridden and guilt-edged.  Can Bolder overcome this tempest of the mind and save the town before more people take their lives?

An ominous shadow glided across the room then rested on the classic armchair next to the window that was covered in blue police tape. The shadow transposed into an older man, well-dressed, and carrying a gentleman’s walking cane with a lion’s head handle, appearing in front of him. He wore a distinctive 1842 Prince Albert coat, brown jacket, yellow vest, check brown trousers, and a gentleman’s bowler hat—a hard hat with a short, rolled brim and a thin grosgrain band. He placed his right hand on the rim, tipping in acknowledgement of Bolder’s presence. Then he took a seat and crossed his legs.

“Well, I’m glad to leave my eternity box for a while. My coffin, that is. I keep forgetting you’re not from my time,” the poltergeist said.

Bolder squinted, looking straight ahead, his eyes fixated on the demon. It was a death stare and not meant to be welcoming. “It’s you? I can feel it.”

“Hmm, you were always more in tune with the afterlife than anyone I have encountered before. A special talent, if you ask me, my dear boy.”

Bolder took a couple of steps forward to get a closer look at the demon. “But that’s not why I’m here?”

“It’s not coincidental unless you think I’m stupid.” Bolder folded his arms across his chest and remained silent. He knew this demon was a conversationalist.

“I had to stage it, you know. Poor girl, she was so sweet, but I don’t deal with amateurs.” The demon pointed toward the balcony. “I encouraged her to jump, and she leapt without a second thought.”

“You killed a young, innocent woman?”

“No need to get emotional. A small sacrifice to get you here. Fimble-fumble. A lame excuse to get your chief to send you to this dreaded town.”

“We have unfinished business, you and I.”

“You took my Kelly from me, demon, and I’m not done with you!”

“A fighting priest … Revenge will get you nowhere. Or didn’t your God teach you that? Love thy neighbor, my dear boy.”

Bolder brushed his hand over the side pocket where he always carried a small bottle of holy water. He patted it gently to make sure it was still there.

“Oh, that water is useless,” the demon said in a sarcastic drone. “I wouldn’t even bother, if I was you.”

Bolder took the holy water from his pocket, ignoring the demon’s claim that it was ineffective. He unscrewed the lid and raised it toward him.

“You know, my dear boy, a new demon often asks me how it feels to be splashed by holy water. It’s a good question, don’t you think?” The demon appeared to be more agitated as his mild-mannered tone became aggressive. “I tell them it feels like boiling water on your skin at the beginning—and yes, it’s painful—but after a while, you learn to manage that pain. It’s only short-lived.” The demon stood up from the armchair while resting on his walking stick and said, “But to avoid the pain of holy water … I have a surprise for you.”

“What surprise, demon? You only carry tricks, lies, and deceit.” Bolder raised the holy water, ready to propel it toward the demon. The demon raised his hand for him to stop. “No, no, it’s not like that. I have someone who would like to say hello. And keep in mind that I can bring Kelly back whenever I like … She lives in my world now.”

1. What inspired you to write this book? OR Tell us a little about how this story first came to be. Did it start with an image, a voice, a concept, a dilemma, or something else?

It happened accidentally when I was studying Australian ghost towns for another project. I couldn’t get over how many ex-convict and mining towns there were in this country in the early 19th century that fizzled away after the gold ran out. Each town with its unique stories of despair and ghost sightings steeped in mystery. After that, I created the characters, and I thought, what would be better than a priest turned detective and spirit hunter? This character would visit these towns to solve cold case murders of the supernatural kind for the particular police branch for unexplained crimes.

I learned after writing my first book that I didn’t know much! This is despite being well educated and having completed a writing course. I learned that writing as a craft comes with experience, practice, dedication, and continued learning. You get better with each book from feedback, reviews, and learning from other writers. I have an excellent ARC list that provides honest feedback on my prerelease manuscripts. More importantly, I realized that I knew nothing about book marketing and how to create an engaged audience of readers.
With the current book, Bolder Guilt-Edged, I learned that your protagonist and antagonist need to interact with the reader and make a connection. Readers care most about the characters, likes, dislikes, quirks, joys, failures, and challenges. This is the strength of any book, and it drives the storyline and plot. In this book, I bring out the emotional aspects of the protagonist and the antagonist—the demon. Readers also like to get into the antagonist as a character.

My capacity to push me harder emotionally and spiritually. This book was harder to write because it was more than a horror story. There is an underlying emotion instilled in the characters. It was a battle we all fight—our inner thoughts and who we deal with past incidences that have affected us. Notably, for some, how we manage it and compartmentalizes it. I unleash a lot of emotion in the book that makes us think about our place in the world spiritually.

Bolder is the surname of Zack Bolder, the priest turned supernatural detective and spirit hunter. But essentially, it’s a deliberate take because I wanted the character to have a bold personality. The term “Guilt-Edged” applies to our guilt-ridden past and how specific incidences in our life affect us. We are, in essence, all guilt-ridden in some way.

Not the main protagonist or antagonist—they are unique. There is a movie called Constantine with Keanu Reeves, which is similar to Zack Bolder, but I never deliberately bases my story. The supporting character, Detective Wellock, reminds me of a complex nose, tough-talking police investigator that is common in most crime series today. He is a skeptic but is learning to believe in demons as he spends more time partnering with Zack Bolder on cold cases.

Of course. Why write a book if you don’t have a deep meaning for the readers? The moral of the story is we are all ‘Guilt-Edged” in a way. Some more than others because of a trauma we have experienced in life. Some of this trauma is treated by a skillful psychologist, and they compartmentalize it and tuck it away. But that is a treatment or conditioning, and it doesn’t resolve the underlying guilt-ridden emotion. It’s still there—only suppressed. There are times in life when we may have to deal with the guilt head-on to resolve it. Some do it spiritually, as portrayed in my book. Some find other ways to compel the emotion. The book does leave this lesson open-ended in a way.

To answer this question, I would be spoiling the book for my readers. I want them to imagine how Bolder confronts his guilt.

The demon antagonist, John Stable. I had to create a demon that had a personality and a name. Not your standard devil you find in many horror stories. This demon and its characterization are as much about the book as it is for Zack Bolder. I had to develop the demon’s point of view. Because I write in the person omniscient, I had to get into the head of the devil—not an easy feat for any writer.

Write more books. I am planning to write the next installment of the Zack Bolder series. Book number four is called ‘Bolder Ultimate Cause.’ It’s scheduled for September 2021 release. 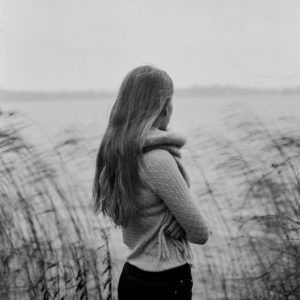 Janice Tremayne is an Amazon bestselling and award-winning ghost and supernatural writer. Janice is a finalist in the Readers’ Favorite 2020 International Book Awards in fiction-supernatural and was awarded the distinguished favorite prize for paranormal horror at the New York City Big Book Awards 2020.

She is an emerging Australian author who lives with her family in Melbourne. Her recent publications, Haunting in Hartley and Bolder Blindsided, reached number one in the Amazon kindle ranking for Occult Supernatural, Ghosts and Haunted Houses categories hot new releases and bestseller. Janice is well-versed in her cultural superstitions and how they influence daily life and customs. She has developed a passion and style for writing ghost and supernatural novels for new adult readers.

Janice Tremayne will be awarding 1 of 5 digital copies of the book via BookFunnel to a randomly drawn winner via rafflecopter during the tour.