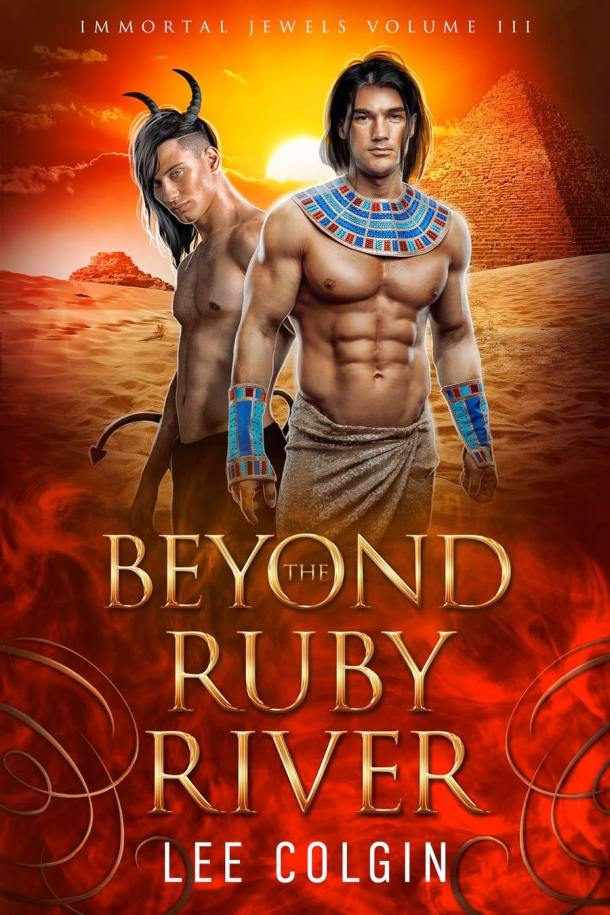 Book Title: Beyond the Ruby River

It’s the third in a series but can be read as a standalone.

When an incubus half-breed falls for a mortal Egyptian man, will their love span centuries or are they destined to pine for each other for all eternity?

In Ancient Egypt when the pharaohs ruled the banks of the Nile, Mahu led a simple, if somewhat melancholy, life. Making papyrus filled his days. His needs were provided for, but deep in his soul, Mahu longed for companionship.

Dakarai, born of a demon mother and a human father, craved independence. A young incubus constantly in the shadows of his full-blooded siblings, Daka set out for a new city and a life of his own.

While a starving Daka roams the streets hunting for a meal, the sight of a beautiful man walking alone stops him in his tracks. The handsome stranger is just what he needs to quench his spiraling thirst.

But Mahu turns out to be more than Daka bargained for, and his heart falls for the lonely man.

What betrayal shatters their foundation, can Daka and Mahu find their way back to each other, or is each soul destined to long for the other for all eternity?

Beyond the Ruby River is an MM Paranormal Romance featuring a steamy love story, a second chance romance, and the mysteries of an ancient world. This is book three of a series and can be read as a standalone with its own HEA and satisfying conclusion.

Hunger stirred deep in Daka’s core, an emptiness with claws and teeth demanding to be filled. It was his first night in Naukratis, and already he wondered if he’d

made a mistake abandoning the safe cocoon of his family. Though eager for a taste of independence, Daka’s nerves flut‐ tered with unease as he stalked the unfamiliar streets.

With only a warm sea breeze for company, Daka let loose his extra sense, the one that would lead him to a meal. Entering the wide market square, he cast his gaze over dozens of stalls, their colorful awnings muted in the evening light. Laborers celerated the end of a day’s work with beer, bread, and conversa‐ tion. Street vendors peddled their offerings. Naukratis smelled of fresh spiced fish, baking bread, and candied nuts—all of which appealed to him, but none that would quench this particular hunger.

What Daka needed would be found past the town’s main market, perhaps down a side street or along a narrow alley. Inhaling through his nose, sorting the myriad array of scents, he searched for the alluring aroma of pleasure. A brothel would suit perfectly.

Daka’s intuition guided him forward, but before he could cut south to chase the divine smell of arousal around the corner, his gaze landed on an elegant man and refused to budge. His eyes possessed a will of their own, such was the man’s appeal.

He was taller than Daka’s average height, long of limb with wide shoulders and perfect posture. He wore cornflower blue linen, belted at his narrow waist, skirt hanging to a svelte pair of thighs. Dark onyx tresses hung past his chin, straight and prob‐ ably silken to the touch. Daka couldn’t be sure of the texture at this distance and it was suddenly of the utmost importance to find out.

Though brothel workers would make for an easier target, Daka veered off course to pursue the handsome man instead. To seduce him and touch his lovely hair for himself. He followed through the square—dodging people and slinking amongst the crowd, stealthy as a cat and just as light on his feet—until he was no more than ten paces from his quarry.

This close, Daka could pick up the scent lingering in the man’s wake. Earthen and woody, like the papyrus that grew in the marshy lands nearby. He inhaled greedily. What would he smell like aroused? Daka had to know.

The man left the busy center of town, turned west, and continued between rows of mud brick houses, his pace steady as a pulsing heart. He had the stride of a man to a purpose. Daka’s curiosity grew with each step. Instead of catching up to begin the seduction, Daka shoved his appetite aside in favor of learning the man’s destination.

They walked for another quarter hour until the chirps of bugs overtook the noise from town and houses gave way to farmland. Daka spotted the neat rows of tumuli leading to an ancient mastaba, and their endpoint became clear.

The man had led him to the final resting place of Naukratis’ dead.

Well-maintained burial mounds, with funerary gardens throughout, lined the landscape. Daka hung back so as not to be noticed or to disturb this man in his grief. The perfect posture he’d noted earlier began to sag, shoulders drooping forward, head bowed as he knelt by a triad of graves. He sat back on his heels, long thighs stretched thin, the blue linen of his skirt revealing smooth bronzed skin.

Daka could not help his appetite, inappropriate as it may be, though he would strive to contain it. This man was in no mood for the sort of amorous encounter an incubus like himself fed on. He needed a warm, familial embrace, not the frenzied release Daka itched to provide.

He slunk back into the shadows to watch from under a sweet-smelling date palm. The man sat with the dead. Daka sat by himself, wondering who the man had lost.

Daka’s family possessed immortality. At least, his mother and siblings did. His father was human, but Daka had never met him. As a half-blooded demon, he’d staked claim to immortality but not to all the gifts that came with it. His powers of sway and persuasion were paltry in comparison to his full-blooded brethren. Unable to bend people to his will, Daka could only nudge. He might never develop the skill of astral projection. But he would live forever, a feat which seemed unfathomable at only twenty-two years into eternity.

The man bent over the graves had a decade or so on Daka in age, perhaps more. Maybe thirty-five or forty, Daka couldn’t tell. A man in his prime but worn around the edges with the melancholy that loss thrusts upon the living.

Lee Colgin has loved vampires since she read Dracula on a hot, sunny beach at 13 years old. She lives in North Carolina with lots of dogs and her husband. No, he’s not a vampire, but she loves him anyway. Lee likes to workout so she can eat the maximum amount of cookies with her pizza. Ask her how much she can bench press.

a direct-to-kindle copy of Beneath the Opal Arc

and a direct-to-kindle copy of Across the Sapphire Sea 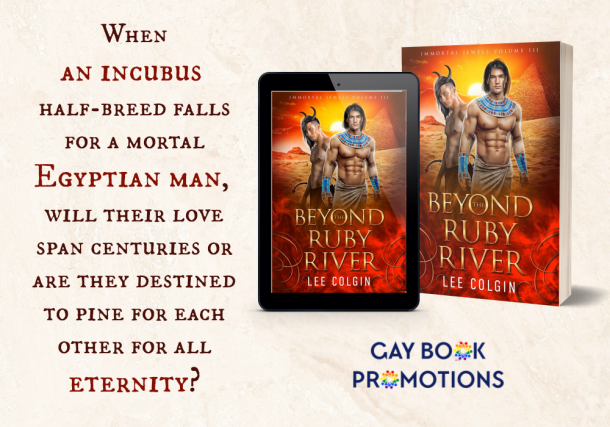 One Reply to “Book Blitz & Excerpt: Beyond the Ruby River + Giveaway”