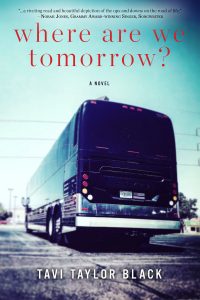 Where Are We Tomorrow?
by: Tavi Taylor Black
Genre: Literary Fiction, Women’s Fiction

For a woman working in the male dominated world of rock ‘n’ roll touring, pregnancy is not an option.

Alex Evans, a thirty-six year old touring electrician, discovers through an accidental pregnancy and then the pain of miscarriage that she truly wants a family. But to attempt another pregnancy, she’ll have to change both her career and her relationship; her partner Connor, ten years her senior, isn’t prepared to become a father again.

When Alex is implicated in an accident involving the female pop star she works for, she and three other women on tour rent a house together in Tuscany. While the tour regroups, confessions are made, secrets are spilled: the guitar tech conceals a forbidden love, the production assistant’s ambition knows no limits, and the personal assistant battles mental issues.

Through arguments and accidents, combating drug use and religion, the women help each other look back on the choices they’ve made, eventually buoying each other, offering up strength to face tough decisions ahead.

INSIDE THE CONCRETE arena, programmed lights whirred and spun in rhythm; eleven thousand fans watched, mesmerized, as vibrant magenta and violet beams sliced through midnight black. On stage, the band regurgitated the same set as the night before, and the night before that. They’d performed the set in Mexico City and Guadalajara. As far south as Santiago and Lima. The road crew for Sadie Estrada’s Home Remedy tour knew each dip in volume, each drop in the beat. They knew exactly, down to the second, how much time it required to step outside and suck down a Marlboro. These time-zone travelers planned bathroom breaks by the songs’ measures; no one missed a cue to mute the stage mics, to hand out room-temp bottled water for set breaks, to pull up house lights.

Behind heavy velvet curtains, separated from the frenzied pace of the show, Alex unscrewed the cover of a moving light to expose the core: circuit boards and capacitors, motors connected to color wheels. Deep bass, feedback, and the fevered pitch of collective voices penetrated the curtain, the familiar, almost comforting reverberations of life on the road. Alex continued her diagnosis, removing the light harness as a mother removes a soiled diaper—routinely, with a touch of tenderness. While she located and replaced the broken part, she kept an ear to the music, alert to the final measure of the set, ready to repack her multi-wheeled toolbox, move on to the next city, set up again.

Alex ran the light through all its functions, testing and retesting once she’d replaced the gobo wheel. The body of the light panned and tilted, working fine. A small victory.

“Sure you know what you’re doing, little lady?” Alex turned at the familiar voice of the tour’s production manager.

“Funny,” she said. “Very original. For that, you get to help me put it away.” Alex waited for another barb, one about her not being able to lift the seventy pounds by herself, but Joe simply helped her flip and crate the unit, a harder task for him at 5’2” than it was for Alex, a good five inches taller.

The arena crackled in anticipation of the show’s climax. Thousands of voices swelled and surged, a unified congregation. The body of the moving light settled into the carved Styrofoam, and Alex tucked its tail inside the handle. As she slammed the case shut, Joe’s laminate got caught inside the box, and he was jerked down by the lanyard around his neck. He freed the latches and yanked it clear, smoothing the wrinkles from the photo of his two young children, a wallet-sized clipping he’d taped behind his backstage pass. Joe caught Alex eyeing the photo.

“When are you gonna give in and pop out a few yourself?” Joe asked. Alex breathed slowly, letting a brief sadness settle into her body, though her face wore a practiced, blank expression. She gestured into the smothering dark, into the roar of the crowd and sweat-filled air. “And give up all this?”

The idea for this book came at a writing retreat with some grad school friends almost twelve years ago now. I had just stopped touring with bands because I was pregnant, so I had a bit of distance from the life. I was trying to look at it from a new perspective. I always wanted the story to be about the women I had toured with when I was on the road with Norah Jones. Having several women on a tour was pretty unheard-of at the time (2005-2008), at least in my experience. The first draft was written in all 4 women’s POV, first person.

As my mentor, A.J. Verdelle, often says, “it’s not over until it’s between the covers.” I can’t tell you how many drafts this book went through. As I mentioned above, it changed from 1st person to 3rd person omniscient, but I also revised from past tense to present tense then back to past again on the suggestion of various editors. The manuscript started at 130,000 words. I cut and built, cut and built. It’s interesting because one of the things many reviewers have said is that the novel is short and they would like to know more about the other women in the book (besides Alex, the main protagonist). Well, I’ve got plenty of their stories that have been cut from the final draft. If anyone wants to hear about Kat or Brooke or Lily I’ll happily share their stories!

The writing didn’t surprise me as much as the response I’m getting now. The book is doing exactly what I’d hoped to do; people–particularly women–are connecting to and identifying with the struggles of Alex, Lily, Kat and Brooke. Readers who have reached out to me have fallen nearly as in love with the women as I have. When you’ve worked so long on something, you start to despair that you are wasting your time, or that maybe your work won’t be as good as you hope. So, what surprised me were the yeses I received. Writers get so used to ‘no’s that when that yes comes, it leaves you a bit dumbstruck. TouchPoint Press really took a chance on me. Somehow, they saw the beauty in the book that many many many others passed over. And the incredibly positive response continues to be a wonderful surprise.

“Where are we tomorrow?” is a question that is asked nearly every day on a road tour. When you move from city to city, you don’t always pay attention to what’s coming next. Often, you only see the inside of an arena–you don’t get to see the city at all. Like the characters Alex and Kat in the book, I would often try to get out for an afternoon walk, just to get my bearings (and some fresh air). So, at the end of the night, when you’re all packed up and climbing onto the tour bus, a common question is “Where are we tomorrow?” Just so you know where you’re going to end up when you roll out of your bunk in the morning.

Yes! So many of the characters were inspired by real people. The 4 women are all based on real people who know (see attached photo). The real women aren’t exactly the same as the characters, of course, who are fictionalized. The women they are based on have been incredibly gracious. I did warn them ahead of time, but still, I think it was very strange for them to read this book. For instance, the woman that Kat is based on is a guitar tech (and a damn good one) and she rides horses, but she’s not gay. So there was a bit of awkwardness around that. The woman who Brooke is based on (Mia Adams) is a singer and actress, but she’s not overtly ambitious at the expense of all else!

Other, more minor characters might recognize themselves, at least some traits, but I haven’t mentioned it to them. I guess I’ll find out what they think soon 🙂

For the record, the pop star character, Sadie, is absolutely nothing like Norah Jones, who is about as cool and sweet as you think she might be.

A lesson or moral? No. Not exactly. I don’t think it’s the job of an author to preach. I think our job (at least for literary works) is to pose questions. To make people feel or think. To let people know that pain and fear, joy and contentment–every emotion–is fairly universal. We are all just trying our best to reconcile ourselves with our past and find a little happiness in this life.

No one has ever asked me this before! People have mentioned their favorite parts, but I’m really having to think about this.

Ok, it’s such a small moment, not at all pivotal to the story, but I love the scene where the mothers are dressed in their daughters’ clothing, looking ridiculous and all getting giggly because Sadie is paying attention to them. To me, this says so much about our culture’s addiction to fame. Even these women, these mothers who are there to support their daughters, get caught up and starry eyed around a celebrity.

Alex, the protagonist, was definitely the most challenging because she was too close to home. When I started out, I had another woman in mind as Alex, but slowly she took on my traits. My love of poetry, my search for a home and family. I wanted Alex to be more like my friend, Sharon Huizinga, who I had toured with around the same time. In my mind, she still looks like Sharon, but she acts more like me. I’m not someone who loves to talk (or write) about myself, so I had to come to terms with how much Alex represents my own journey.

I am really invested in getting out to talk about this book. I have a number of readings and book signings set up and would love to visit with book clubs. I also have two other novels I am trying to place– a historical novel set on an estate in coastal Maine, and a middle grade fantasy that I wrote with my daughter.

Tavi Taylor Black lives on an island near Seattle where she designs sets for the ballet, works as the tour manager for a musical mantra group, and has helped found an anti-domestic violence non-profit organization. Before earning an MFA from Lesley University, Tavi spent 14 years touring with rock bands. Where Are We Tomorrow? was the 1st place winner of the 2016 PNWA Mainstream Fiction Contest and was also a finalist in the Nicholas Schaffner Award for Music in Literature. Several of Tavi’s short stories have been shortlisted for prizes, including Aesthetica Magazine’s Competition, and the Donald Barthelme Prize for Short Prose. 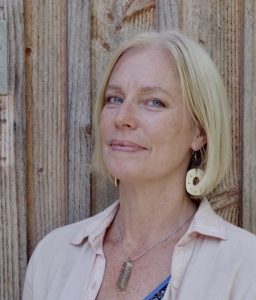 2 Replies to “Spotlight & Author Interview: Where Are We Tomorrow + Excerpt”