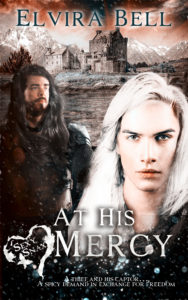 At His Mercy
by Elvira Bell

A thief and his captor… A spicy demand in exchange for freedom. Will Lio give in to the lord of the manor?

Young thief Lio should have known better than to steal from the mighty Lord Callen. After he’s been locked up in a cold cell in Callen’s manor, he’s told that he’ll be set free on one condition—that he agrees to share Callen’s bed for one night. Lio refuses, but can’t help wondering what sleeping with Callen might be like. Callen, on the other hand, takes the rejection badly and thinks Lio finds him old and unattractive. He can’t stop thinking about the pretty boy with the white hair though, and they’re about to overcome their hostility toward one another when something happens that brutally cuts off their budding friendship and causes Callen to throw Lio out headfirst.

For months they are apart. Callen isolates himself in his chamber, enraged and bitter, while Lio struggles to make it through the winter. In the end, starvation forces him to seek out the last man he wants to see—Lord Callen. Callen, who resents him and does nothing to hide it. Will Lio be able to get through to him? Will they ever have what they both want—each other?

They never should have taken the forest road at night.

“We could go back,” Lio said, stumbling after his father on the muddy path. “That cottage we passed a mile back, maybe we could…”

Athos grunted, his boots leaving large, wet prints in the sludge. Almost doubled over from the weight of the burlap bag, he looked like a hunchback. “You’ll walk until I tell you to stop.”

Lio drew his hand over his eyes to wipe the icy rain away. “But…” He racked his brains for words that might make his father see reason. They were far away from the manor by now, and they had merely taken some tools and iron from the smithy, after the smith and his apprentice had left for the day. With luck, the theft wouldn’t be noticed until morning. Lord Callen certainly had enough gold to replace the tongs and hammers he’d lost. To Lio’s family, though, the stolen goods meant they could repair the hole in the roof, and his father could forge nails and horseshoes the villagers would be only too happy to pay for. Athos had been a blacksmith once, in his youth, but Lio had never dared ask why he had left such a good profession. His work was fine, and although there were some people who’d never buy anything made by his hands, he could make enough money this way to see them through the winter.

Athos coughed, a nasty, hollow sound Lio was all too familiar with.

“No!” Athos spun around to give him a wild look. He towered over Lio, the way he always had. “I don’t take orders from a whelp like you, understand? While you’re living in my house, lad, you do as I tell you.” He coughed again, but pressed on through the darkness. The lantern swinging in his hand wasn’t strong enough to light up much of the surroundings, and a shiver ran down Lio’s spine at the thought of packs of wolves out on the hunt, or trolls and monsters eager to lure wanderers into their lairs. Traveling through the woods in daytime wasn’t so bad, though he wouldn’t like doing it without company, but everyone knew that one shouldn’t be out after dark. His mother would scold them when they got home—if they did. Lio had accompanied his father on similar business before, but they had been closer to home then and back by the hearth before midnight. Athos didn’t steal unless there were no other options, and before this he had only taken the odd bread loaf or piece of meat from those of the nearby farmers who spat after him and his family. ‘Only steal from those who deserve it,’ he had told Lio often. Lio didn’t know much about Lord Callen, but if he owned half as much land and gold as people said he did, he deserved it more than most. It wasn’t fair that someone like him had everything, while others starved.

“I can carry the lantern, at least,” he tried, uneasy at the sound of his father’s labored breathing.

“The lantern?” Athos scoffed. “It weighs nothing. Now be quiet, all right? I brought you as a lookout. Wouldn’t expect a wisp of a thing like you to carry anything, would I?”

Lio bit back an angered reply. He was small compared to his father, it was true, closer in height to his mother and with her slender build, too. From her he had his ghostly pale hair as well, that made the villagers hiss ‘Devil-child’ and other such nonsense after him. The one thing he had from his father was the dark color of his eyes. His little brother and sisters had those eyes, too, but their hair was dark as coal. He often wished his own was, too.

Wrapping his arms around himself in a futile attempt to get warm, he wondered how far they had left. Their cottage was on the other side of the woods, in a clearing out of sight from any other people. The nearest farm was only a short walk away, but Lio and his family had never been counted among the villagers who were their neighbors. Young women sought out his mother secretly, when her herbs were the only thing that might help them end unwanted pregnancies or cure their sick babies. His father was the one the villagers called for when they needed shameful or dangerous tasks done, like gelding foals or burying disease-spreading corpses. Shame, filth—that was all they were associated with. They always had been.

A strange sound pierced through the roaring of the rain. The neighing of a horse? He stopped, throwing anxious looks around him. “Father, did you—”

“Quiet!” Athos trudged on, muttering to himself. The rain streamed down Lio’s face, plastering his hair to his skin. He shivered, not sure if it was from the cold or from fear. Another sound came through the darkness—a voice? Several voices?

“Father, run!” But he hadn’t taken more than a step forward before someone grabbed him by the neck, pulling him back. In front of him he saw his father stop as a rider blocked his path. A dark-clad man on a black steed, carrying a torch in his hand. His hair was obscured by a helmet. There were four men in total, including the one with the forceful grip on Lio’s neck. Lio struggled in vain to free himself, and the man chuckled in a low, raspy voice.

“Well,” said the rider in black, as two of his henchmen closed in on Athos with their swords drawn. “We found our prey at last. Did you really think I’d allow anyone to steal from me?” His voice was smooth but cold. It was difficult to tell his age—Lord Callen was hardly a young man, but he was well-built and tall, with broad shoulders and a straight, proud posture. His eyes were just as icy as his voice.

Athos dropped the burlap sack, rising to his full height and taking a step closer to Callen, as if to challenge him. “You’ve got enough for a whole village, but we ain’t got a thing!”

“Oh, is that so?” Callen curled his lip. “While I applaud your courage, I really can’t let a thing like this slide. You understand, surely? Men, how should we punish this pitiful crime?”

“Their right hands,” said one of the henchmen, giving Athos a nudge with the blunt side of his sword. “Off with them.”

“Death,” suggested another man with an ugly grin. “That’d stop them from doing it again, my lord.”

Callen nodded. “Why, certainly, but I personally feel it’s a tad…boring?” His cool gaze landed on Lio’s face. He scrutinized him for a few moments before turning away. “Seize them,” he said. “We bring them with us.”

“I’ve got little ones at home, sir!” Athos called out. “They’ve had nothing to eat for the last week, and me and my wife—”

“What a pity,” Callen said.

Athos roared, trying to make a run for it, but one of Callen’s men stabbed his sword into his shoulder before he’d gotten away. Callen snorted as Athos was tied up and thrown over the back of one of the horses as if he were a sack of flour. Lio stared, his eyes fixed on his father’s shape. That wound… How bad is it?

“Yes,” murmured the man who held Lio captive. He jumped to the ground and pulled Lio toward him, his breath hot and revolting against Lio’s neck. “I’ll take care of you.”

“Let me go!” Lio squirmed, but the man quickly tied his wrists together and put him face down in front of the saddle before mounting the horse again. Lio’s breath hitched in his throat as the man put a big, gloved hand on the back of his thigh.

Yes. As the riders started retracing their tracks through the woods, back to Lord Callen’s manor, Lio thought bitterly that he regretted everything. He couldn’t see his father, but he heard his pained groans and whimpers, and the men shouting at him to keep quiet. If only he could do something! What would happen to them once they reached the manor? His father’s injury—how bad was it? His mother would have been able to stop the blood—she would have healed him in no time. But Lio didn’t have any of her knowledge. He couldn’t do anything but hope, in spite of everything, that they would make it out of this alive. 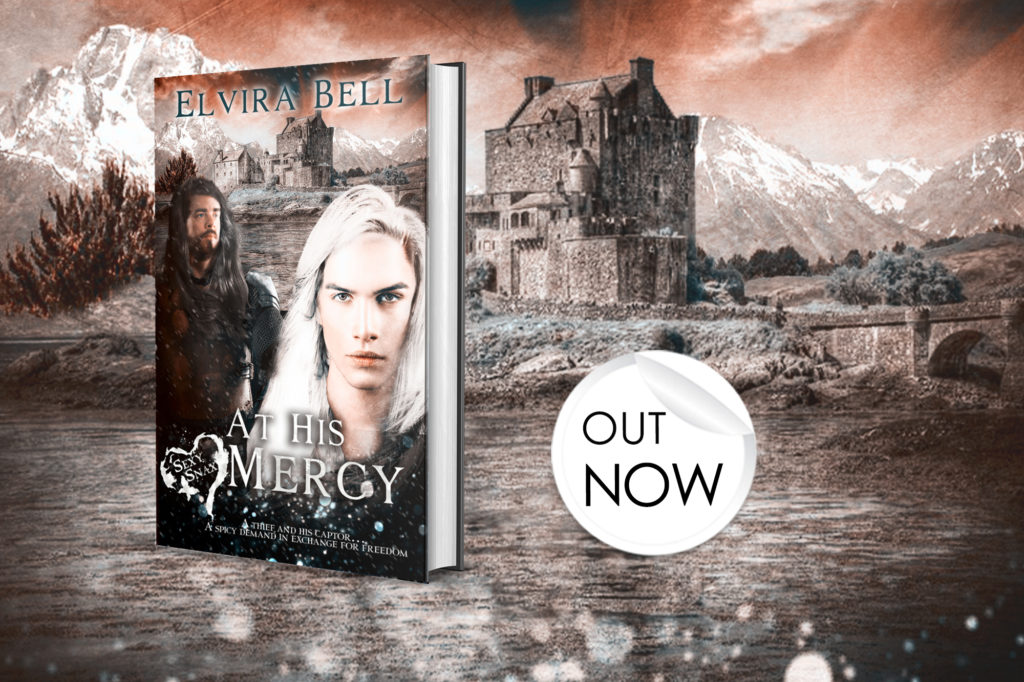 Evira Bell’s At His Mercy Giveaway

ELVIRA BELL IS GIVING AWAY THIS FABULOUS PRIZE TO ONE LUCKY WINNER. ENTER HERE FOR YOUR CHANCE TO WIN A LOVELY GIFT PACKAGE AND GET A FIRST FOR ROMANCE GIFT CARD! Notice: This competition ends on 16th March 2021 at 5pm GMT. Competition hosted by Totally Entwined Group.

One Reply to “Book Blitz & Excerpt: At His Mercy + Giveaway”