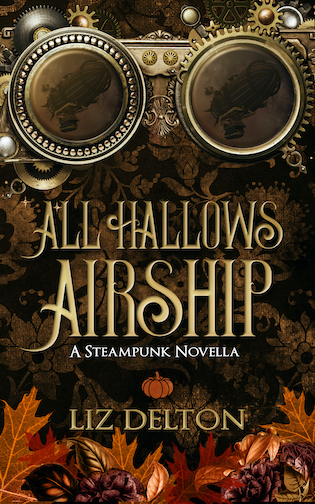 A catastrophic blast. A haunting memory. And she only has one chance to prove her family’s innocence.

All Caz Coppersdown has ever wanted is to be a journalist for the Soldark Times. But the chances of her parents letting her pursue a breaking story are slim. Secluded after a childhood illness, Caz finally gets to leave Soldark for a trip to the country to her great aunt’s estate, but she quickly finds out there isn’t anything newsworthy there—unless you count her aunt’s upcoming All Hallows Eve soiree.

Until the local airshow clashes with her aunt’s party plans—causing more than just pumpkins to be destroyed. When Caz meets one of the airship pilots and discovers something about her family’s past, Caz might have just found her big story.

But she’ll need to dig for the facts quickly, because the constables are looking for a culprit, and old ghosts are making themselves known on this All Hallows Eve.

As they pulled up to the front door of Daguerre, Caz didn’t know what to expect. She certainly didn’t expect to see her great aunt, dressed in a modest burgundy gown with black lace edging, stacking pumpkins on the doorstep with the help of a maid. There was dirt under her fingernails. Caz grinned and removed her satin gloves, stuffing them into her pocket before opening the door to the auto. Grimlee wordlessly brought her carpetbag around as Caz stepped forward. She took a deep breath of the country air, inhaling the unfamiliar yet alluring scents of nature.

Dowager Daguerre straightened, a calculating look in her eye as she smiled at her great-niece. “Go get the last four, will you, Marla, and then we can see if we need to buy extra from Shore. Caroline! Welcome to Daguerre.”

“It’s Caz,” she blurted, and heat immediately rushed to her cheeks as she reached up to cover her mouth. Had she really just corrected her? “I’m sorry, Dowager.”

Her great aunt raised a single eyebrow–a feat Caz envied–and said, “What for? I would never wish to call you by a name you dislike. And as far as names go, you may call me Elmira. We are flesh and blood, by-golly.”

“I–all right,” Caz said breathlessly, her cheeks still burning, though she was secretly pleased. Her aunt was nothing like the stuffy nobles in Soldark. Her opinion on the upcoming month shifted immediately to excitement.

“Grimlee, take her bag to her room, it’s already prepared. That’s all you brought?” she asked Caz.

“No, my trunk should be here this afternoon. At least, that’s what my father said.”

“Perfect,” Elmira said crisply. “Now, I need your opinion on these pumpkins.”

Caz grinned as her great aunt picked up some wicked-looking shears and sliced off a few inches of the long stem on one of the bright orange gourds littering the mansion’s doorstep.

Though she wasn’t sure she’d find much action worthy of a gripping story she could write for the Soldark Times, perhaps the season in the country wouldn’t be so boring after all. 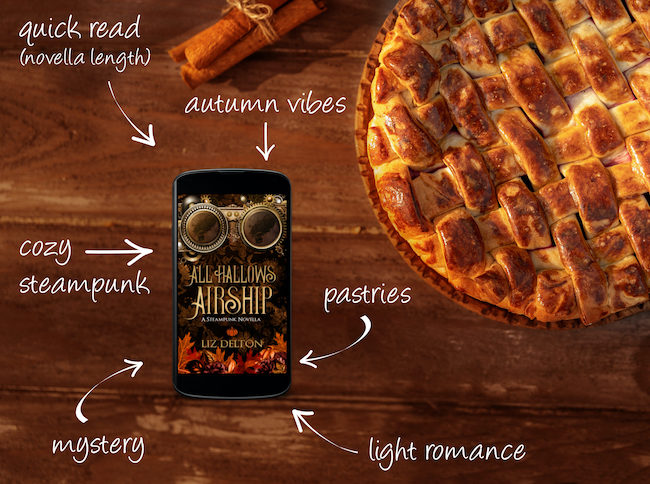 Liz Delton writes and lives in New England, with her husband and amazing son. She studied Theater Management at the University of the Arts in Philly, always having enjoyed the backstage life of storytelling.

She reads and writes fantasy, especially the kind with alternate worlds. Liz is the author of the dystopian Arcera Trilogy, the fantasy Realm of Camellia series, and the steampunk novel THE ALCHEMYST’S MIRROR. World-building is her favorite part of writing, and she is always dreaming up new fantastic places.

She loves drinking tea and traveling. When she’s not writing you can find her hands full with one of her many craft projects.

One Reply to “Book Blitz & Excerpt: All Hallows Airship + Giveaway”