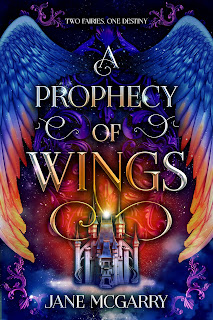 A Prophecy of Wings

by Jane McGarry
Genre: YA Fantasy/Retelling
Publisher: JM Books
Date of Publication:  May 18, 2021
ISBN ebook: 978-1-7365884-0-6
ISBN print: 978-1-7365884-1-3
ASIN: B093Y21CCZ
Number of pages: 382
Word Count: 71,000
Cover Artist: Graphics by Mulan Jiang
Two Fairies: One Destiny
A betrayal, a prophecy, a kingdom in the balance. Sixteen years ago the evil Dahlia overthrew the kingdom of Roshall Grove, the heart of the Fairy World. A prophecy foreseen by Edwina, a powerful enchantress, remains the only hope to topple her iron-fisted rule. Now, Lina, a simple peasant girl, learns her future is linked to this prophecy. Edwina brings Lina to the Fairy World to fulfill her destin
—conquering Queen Dahlia.
Separated from the enchantress by agents of the dark queen, Lina begins a perilous journey to join the Resistors, who await her return to mount their attack. Thrust into this strange world, Lina must navigate relations with a host of different fairies and animals, never knowing who seeks to help or to thwart her. Finally reunited with the Resistors, Lina must find the strength to lead her people and fulfill the prophecy. Meanwhile, Dahlia prepares for the battle, which will ultimately decide the survival of her reign, while reflecting on the path that brought her and her foe to this moment of reckoning.
A fairy tale with an ending twist, A Prophecy of Wings is loosely based on Thumbelina by Hans Christian Andersen and examines the ideas of predestined fates and the subsequent, sometimes unforeseen, consequences.

The pains came more frequently now. Even with the help of Edwina, it was a struggle to run. In the cramped darkness of the tunnel, she tried to maintain her footing, an impossible task with the burgeoning weight of her belly. Time was of the essence. They must not be caught, but the spasms were nearly unbearable.

“I can’t go on,” she gasped, a sharp pang taking her breath away.

“Just a little bit further, Your Highness,” the enchantress coaxed.

Every step down the seemingly endless passageway was sheer torment. Queen Ivy willed herself to continue. She was the last hope for her people, and she must not fail.

Edwina stopped so abruptly; the queen stumbled into her back.
The enchantress pulled the weakened monarch through a narrow gap in the wall.
They crossed the threshold of a doorway into the depths underneath the forest.
A tangle of tree roots filled the cavern, their sinuous forms dwarfing the fairies. A robust scent infused the air with bark, stone, and earth.

Queen Ivy, a Volant used to the skies, reeled at the unfamiliar smells and fell to her knees.

The enchantress, more experienced with Groundling habitats, remained unaffected and surveyed the area. She assisted the queen in a nook hidden between the sides of two large tree roots, which soared overhead out of sight to meet the tree’s trunk somewhere way above.

“Wait here,” she instructed, a moot directive to her incapacitated companion.

While Edwina disappeared the way they came, Ivy settled down her awkward frame. How had it come to this? The past few months had turned her world upside down. Having one’s sister hunt you like prey was horrifying enough, but targeting her baby for death rocked her to her very core.
Instinctively, her hand flew to her stomach, the muscles again tightening with the tremors of labor.

Her friend returned, hair disheveled, wings drooping, and announced, “As far as I can tell, we may have lost them in the maze of tunnels. I have used cloaking measures along the way and put a spell on the door to keep others out. But your sister’s powers are strong. If she were to find us…”

“She will find us. It is only a matter of time,” the queen declared. Dahlia learned enough in dark magic to track even a covered trail.

“Well, it is time for this baby, so here must do.”
Queen Ivy sighed, resigned to the situation. When she discovered she was with child all those months ago, she had not envisioned giving birth in a dark hole underground. The enchantress spread a blanket on the earth for the queen to lie down. She checked the progress of the baby and nodded.

Above all, the baby must survive. Otherwise, the prophecy would remain unfulfilled, and the kingdom would never be restored. The monarch braced herself against one sturdy root; the surface felt surprisingly warm and smooth. Under the calm direction of her lifelong friend, she delivered the child.

Edwina laid the baby girl into her arms. Ivy admired the feathery blond hair and the round little nose. Tears welled in her eyes at the sheer perfection of the infant. The enchantress finished tending to the mother and turned her attention to the newborn. After a quick examination, she ripped a length of fabric off Ivy’s skirt to wrap her. “You could not have asked for a healthier daughter. Now, what shall her name be?”

“Her name?” the queen pondered. “I’ve not thought of one. All I have thought of is her safety.”

“She has found us,” Ivy whispered in dread, her arms tightening around the baby.

“Perhaps not. Perhaps it is King Theros on his way to tell us he defeated Dahlia.”

“No,” the queen affirmed. “It is my sister. I feel her presence. You must take the baby to the other world and keep her safe until the time is right. Dahlia cannot follow you there.”

The soldier’s armor rang loudly in their ears. They came to a halt right outside the doorway.

“Come then,” the enchantress conceded, holding out a hand to help her friend rise.

“No. I must stay and try to defeat Dahlia. Take her.” She thrust the infant into Edwina’s arms. “Go now.”

Loud hammering filled the air with the enemy’s attempt to break the door down.

“But My Queen, she will show you no mercy. I will not leave you here to die.”

Queen Ivy leaned forward and placed her hands on her friend’s, which cradled the child. She slipped the crystal-bound amulet inside the swaddling. “Yes, Edwina, you must. I command it. Take her now and keep her safe.”

The enchantress desperately tried to think of another way.
Axes and spears crashed upon the door, weakening her spell with every stroke.
Sadly, she stepped back and conjured the words to transport her between the worlds, a power only she possessed in the entire kingdom.

The new mother watched the toss of the seeds, and Edwina’s frantically whispered spell. A cloud of dust encircled her friend and her baby.
Too weak to even stand, she blinked through her tears. Just before the two vanished, she said, “Lina. I want her to be named Lina.”

Edwina nodded, the final wish heard, and with a poof, they were gone.

The door finally gave way, a multitude of soldiers pouring in, their armor dark as night. Queen Ivy turned to see her sister step through the broken threshold. Dahlia scrutinized the scene, the queen’s deflated belly and the cloud of dust on the ground. Her eyes narrowed in malice. The baby was beyond her reach—for now. She met Queen Ivy’s eyes and despised the look of triumph in them.

The queen whispered one last anguished prayer for her daughter before an arrow pierced her heart.

Reading was always a big part of Jane’s life. Creating her own stories developed out of this love. To date she has published the Not Every Girl trilogy, a YA Fantasy Adventure. Her latest novel, A Prophecy of Wings, is a retelling of the classic fairy tale, Thumbelina. She lives in New Jersey with my husband, two sons and two extremely spoiled cats. When she is not running around with her family or writing, she can be found curled up with a good book and said cats.
Website
Twitter
Instagram
Bookbub 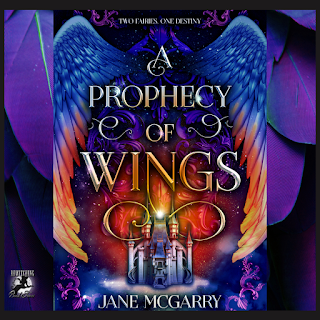 One Reply to “Spotlight & Excerpt: A Prophecy of Wings + Giveaway”