I am thrilled to be hosting a spot on the A MEASURE OF SERENITY by Bryan Prosek Blog Tour hosted by Rockstar Book Tours. Check out my post and make sure to enter the giveaway! 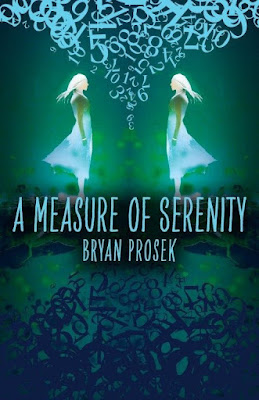 Title: A MEASURE OF SERENITY

A million thoughts, but only one right thing to do.

Eighteen-year-old Serenity Ashdown has a brilliant mind: she counts, calculates, and analyzes everything, even when she doesn’t want to. Her memory is also far beyond photographic, surpassing her physicist father’s abilities. But her world was otherwise normal right up until dimension-hopping enemies forced her into a parallel reality. The feds she meets on the other side claim to want to help her go home. All she has to do is use her memory to reconstruct the right sequence of codes. But it’s soon clear they want something more: a gateway for invasion, because this version of Earth is dying.

Serenity can’t risk returning home with a deadly force behind her, but the feds aren’t about to let her escape. Then she learns that the “other Serenity,” her alter-ego in this dimension, was a resistance leader recently betrayed and killed. She has a chance to assume her alter-ego’s identity and use her unique ability to lead the resistance in their fight against the tyrannical super-government that is poised to invade her universe. Serenity has no idea how to be someone she’s not, but she has to try—or she may not even have a home to return to.

“Readers will enjoy following Serenity as she learns to become a leader . . . in this dystopian thriller showcasing a strong young woman in STEM.” –Kirkus Reviews

The door to Mr. Bailey’s outer office is open, but the chair behind the secretary’s oak desk sits empty. Nobody is in the room, so I walk past two empty chairs and a large plant toward Mr. Bailey’s door and
raise my hand to knock.
“Yes, I can hear you clearly. Can you hear me?” Mr. Bailey says, apparently on the phone. “The connections are getting stronger. This is the first time I’ve been able to remotely form a connection through the facility. Go ahead and put him on.” He pauses. “Hello, Mr. President.”
Mr. President? President of what? The university? No, he would not call Angela Turner “Mister.” I turn and look through the open door behind me. The hallway is empty. I hear nobody coming this way. But still, I should not eavesdrop. What Mr. Bailey says is none of my business.
“Yes, Sir. I will have Phil Ashdown working around the clock now until it’s activated.”
Dad?
I am certain it has something to do with the project he has been working on for so long. What does Mr. Bailey mean by “strong connections”? A connection through the facility?
I have heard enough. As I escape back toward the hallway, I hear Mr. Bailey’s door open.
“Serenity, come on in! What brings you here—the new research project?”
Slowly, I return to Mr. Bailey’s office. His secretary’s small outer office pales in comparison to what sits behind this door. I cannot even take in the whole room without turning my head to scan it. I believe he has turned a former classroom into an office. And he spared no expense with his mahogany desk and floor-to-ceiling bookshelf on one wall.
The sun shines in through a wall of windows on the opposite side. On one wall is a framed picture of Mr. Bailey and Wes Masterson, President of the United States, jointly holding a plaque that I cannot read from this distance.
Mr. Bailey motions toward a leather chair facing his desk. “Please, have a seat.”
I sink into the cushioning of the chair, my hands rubbing the soft leather of the arm rests.
Mr. Bailey sits in his tall chair behind his desk. “I haven’t seen you in a while. How are classes going?”
“They are going well, thanks.” I reply.
I am terrible at small talk. I never know what to say. I probably should ask Mr. Bailey how he is doing, but instead, I sit and wait for him to speak again.
“Your father says you graduate in the spring, is that right?” “Yes.”
“What’s you major again. I think Phil told me, but I forget.” He leans forward, folding his hands and rests his forearms on the desk.
I sit up straight. “Nuclear Medical Technology and Chemical Engineering.”
He smiles. “A double major in two of the most difficult fields. Impressive. I believe you are perfect for the new research project I have.” “Thank you,” I say, not looking at Mr. Bailey but rather, looking
at his telephone. Something troubles me about the phone call I over- heard. It was probably just something typical with my dad’s work, but everything related to my dad’s work troubles me. One thousand one hundred ninety-two books on the bookshelf. I look out the window. Forty-three students and six faculty members in sight, making their way across campus. I see the maple tree outside my classroom, now from a different angle. A sparrow is perched on one of the branches. Eighty-nine thousand seven hundred fifty-six. Just looking at the tree, I know the number of leaves. 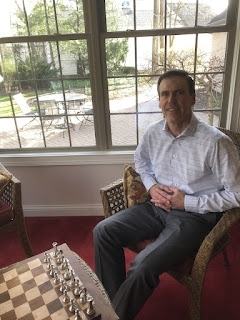 Bryan Prosek is a young adult writer and business attorney. Along with his first two novels, The Brighter the Stars and A Measure of Serenity, he has published books and articles in legal trade journals and magazines. When he isn’t writing or practicing law, you can probably find him watching dystopian and science fiction movies or television shows. He loves the big screen and the small screen. There’s a good chance that he’ll be watching one of the numerous Star Trek movies or series, but he could be watching anything from Guardians of the Galaxy to The Conjuring.

1 winner will receive a finished copy of A MEASURE OF SERENITY & swag, US Only.

One Reply to “Spotlight & Excerpt: A Measure of Serenity + Giveaway”