This post is part of a virtual book tour organized by Goddess Fish Promotions. Justin Alcala will be awarding a $50 Amazon or B/N GC to a randomly drawn winner via rafflecopter during the tour. 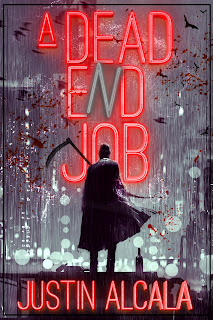 Fans of Terry Pratchett and Shane Kuhn’s THE INTERN’S HANDBOOK will love this noir supernatural thriller.

Death needs a vacation. Badly. But there’s a catch: There are people who cheat the system, always falling through the cracks and not dying like they’re supposed to. Who’s going to take care of them while Death’s sipping on sangria?

The answer is simple: Death needs an intern, and it doesn’t take a rocket scientist to realize that one prospect, Buck Palasinski,-a bankrupt hitman with a roleplaying addiction-might have what it takes. While scoping out his next target, Buck gets drilled in the forehead by a bullet and falls right into Death’s lap.

If they shove him back into his body, he’ll have a few weeks to prove that he has what it takes to be Death’s right-hand.

All he has to do is take out Public Enemy No. 1, John Dillinger, and quit smoking.

The apartment door swung open, and Death hurried out with white badges and a sharpie in his hand. On his chest was an ivory sticker with a label that read “Hello, my name is.” Written in underneath was ‘The Big Cheese’ in handwritten letters. Death peeled another label oﬀ its backing and carefully handed it to Jumbo. It read “Hello, my name is: Jumbo the I.T. Guy.”

“You’re joking.” Jumbo patted the label on his shirt.

“This is new hire orientation.” Death handed me a sticker that spelled out Hello, my name is: Buchanan Palasinski. Underneath in all caps it said, I’m an applicant, which was underlined three times and topped with a frowny face. Death took a step back and inspected us. “Perfect. Okay, you can come in now.” Death whirled around and hurried back into his apartment.

“Well, man.” Jumbo grinned. “If you thought the boat ride was strange, just wait until you see Death’s apartment.” Jumbo pushed the joystick on his controls forward and the chair wheeled through the door. I took one last look down the endless apartment hall, half expecting The Shining twins to appear. I needed another smoke, but I didn’t think that Death would approve. Instead, I looked up at the ceiling and took a few deep breaths. Whatever I saw in here, I’d need to be ready. I took two brisk steps forward and entered Death’s apartment. 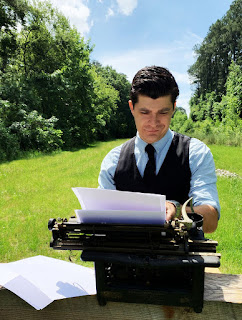 Justin Alcala is a novelist, nerdologist and Speculative Literature Foundation Award Finalist. He’s author of the novels Consumed, (BLK Dog Publishing) The Devil in the Wide City (Solstice Publishing) and Dim Fairytales (All Things That Matter Press). His dozens of short stories have been featured in magazines and anthologies, including It Dances Now (Crimson Street Magazine),The Offering (Rogue Planet Press) and The Lantern Quietly Screams (Castabout Literature). When he’s not burning out his retinas in front of a computer, Justin is an adventuresome tabletop gamer. He’s also a blogger, folklore enthusiast and time traveler. He is an avid quester of anything righteous, from fighting dragons to acquiring magical breakfast eggs from the impregnable grocery fortress.

Most of Justin’s tales and characters take place in The Plenty Dreadful universe, a deranged supernatural version of the modern world. When writing, Justin immerses himself in whatever subject he’s working on, from research to overseas travel. Much to the dismay of his family, he often locks himself away in his office-dungeon while playing themed videos and music over, and over, and over again. Justin currently resides with his dark queen, Mallory, their malevolent daughter, Lily, and their hellcat, Misery. Where his mind might be though is anyone’s guess.