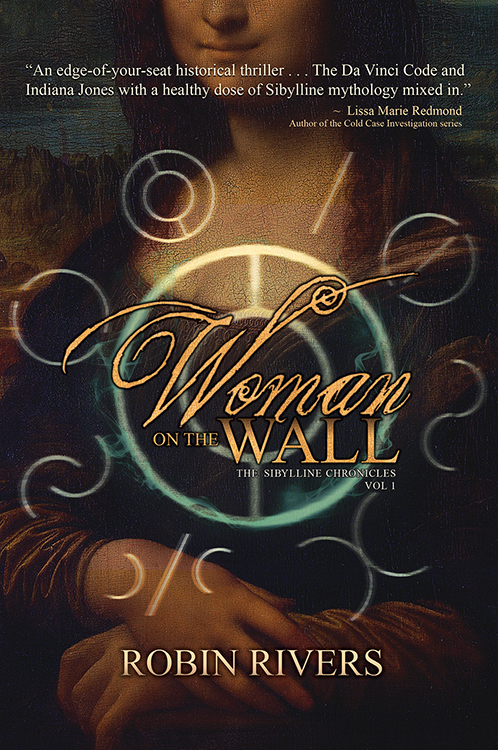 For 500 years, the once powerful order of the Sibylline has kept the identity of its future prophetess hidden in the most famous painting in the world. Amid the chaos of post-World War II France, one woman discovers their ancient secret and its ability to transform a fragmented world.

A brilliant, devoted, and driven paleographer …

After 480 days as a Nazi political prisoner, Dr. Marie Guerrant returns to Paris to repatriate the Mona Lisa and find her daughter. When a British Colonel arrives claiming he needs her French Resistance connections to find the lost painting, which she helped hide seven years earlier, distrust is high. Tipped off about her daughter’s involvement and the Colonel’s obsessive belief that the Mona Lisa contains the identity of a modern-day Sibyl prophetess, Marie must risk her life to save her daughter and the masterpiece from men consumed by controlling destiny.

A brave, bold, and potent prophetess …

On the eve of rising as the Sibyl of Amboise, Aesmeh de la Rose must rely on her visions to find Leonardo da Vinci after he and the Mona Lisa disappear from his workshop at Clos Lucé. The precious painting and its creator cannot be lost or the ancient Sibylline Order faces extermination after more than 1000 years of rebuilding their powerful matriarchy. Torn between duty and love, Aesmeh must tap into an ancient alchemy in a race to keep the Order safe. But, an unspeakable betrayal forces her to make an unfathomable choice to secure the future of the Sibylline.

Intricately plotted, Woman on the Wall by debut author Robin Rivers is a fast-paced historical fantasy set in Paris and Amboise, France in 1519 and 1945. It honors the Sibylline as so much more than ancient myth and celebrates their place in every woman’s journey to self-discovery.

The first book in the six-part series The Sibylline Chronicles, Woman on the Wall is an entrancing tale revealing the fate of two extraordinary women risking their lives to secure the future of humanity–five centuries apart. This rich alternate his- tory binds a brilliant, devoted, and driven paleographer and a brave, bold, and potent prophetess beyond time, each fighting to restore sight to a world blinded by the power and control of men.

A mother’s devotion. A daughter’s determination. An ancient terror’s obsession. The Mother House [The Sibylline Chronicles Vol. 2] by Robin Rivers, available wherever books are sold.

1. What inspired you to write this book? OR Tell us a little about how this story first came to be.Did it start with an image, a voice, a concept, a dilemma or something else?

About ten years ago, a friend gave me the book Azazeel by Youssef Ziedan and I fell in love with his notion of Hypatia of Alexandria as a Sibyl. I went digging and discovered that the stories of these ancient prophetesses, who are immortalized everywhere from the Sistine Chapel to the floor of the Cathedral in Sienna, Italy, don’t exist. I found that impossible to believe, so I set out to create a world in which the Sibylline are an incredible force that those who couldn’t control them set out to erase. This novel took me about three years to complete. I traveled to France in 2019 in order to get all of the local research completed and the discoveries that I made there transformed the novel.

Humility. The editing process was a real lesson in what I didn’t yet know or understand how to apply. I quickly developed a thick skin and a real respect for all of the people writing a novel.

How much I LOVED employing all of my journalism training and techniques to write a thriller. I found my voice with this novel.

It is definitely multi-layered. Woman On The Wall, at its most simple, is meant to reflect the Mona Lisa and her place at the Louvre. We can look beyond it and see the irony of the Sibylline surviving in the very halls of the men who set out to destroy them. Finally, it is the identity hidden within the brush strokes of the most famous painting in the wall, holding the fate of us all in that stillness until the time comes that the Sibylline rise again.

Sister Maurine and Iné Soudier are both inspired by the real Maurine Soudier. I met Maurine when she led me through an absolutely wonderful tour of Château Gaillard Amboise and was so charmed by her stories. She and I have kept in touch in the years since and I sent her an advance copy of the novel. I also hope to reconnect with her when I am in France later this year.

Love and hate are hewn from the same stone.

I love the letters from Aesmeh and those that pepper the novel. There were so many more included in the first draft and I had to pare them back to the few gems that appear in the final version of the novel. Using the literary device as a way to bridge time just makes me swoon a bit.

8. Which character was most challenging to create?

Marie was by far the most complex and challenging character to create. For me, striking the balance of tough, smart, independent woman with a softness that allowed her not to cling too dangerously to her false beliefs turned my writing life upside down for a while. To be honest, Marie was not the original heroine of this story, but emerged as the most provocative and I rewrote the novel with her as the lead.

My immediate future plans are to pack my suitcase and hit the road for a few solo weeks in France. It’s definitely going to involve some research for Vol. 2 of the Sibylline Chronicles, which is going to center around the Royal Abbey of Fontevraud and the region of the Loire Valley surrounding Saumur. Really, though, I’m going to Saumur to sip sparkling wine and sleep for two weeks. I’m exhausted. 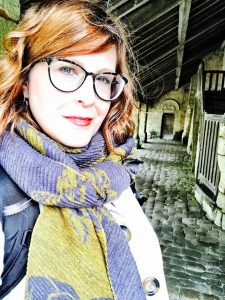 Robin Rivers is an award-winning writer who guides young authors as CEO of Quill Academy of Creative Writing. She has always been fascinated with stories of lost times and nerds out in the realm of all things historical, fantastical, female, and mythological. As a result, she spends her days in a literary universe best described as slipstream

— a mix of historical, magical realism, and haunting romance. Robin lives with her husband, daughters, and their sphynx cat Hypatia on the unceded territory of the Coast Salish Peoples, including the territories of the Musqueam, Squamish, and Tsleil- Waututh Nations in Vancouver, Canada. Woman On The Wall is her debut novel. Stay up to date on The Sibylline Chronicles at thesibyllinechronicles.com and follow Robin on Facebook, Instagram, Twitter, and LinkedIn.