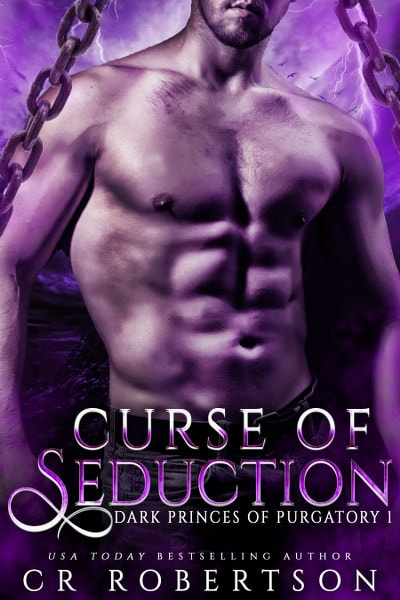 The evil Queen Ophelia cursed the Princes of Purgatory to claim their magic. Only their fated witch mate can save them, but a blood sacrifice is required that demands the highest emotional cost.

Ilana has spent two hundred years believing she is a defective vampire, until the day she bumps into the incubus Ezekiel. Her witch powers finally awaken as they sense the presence of her mate. She finally discovers why she has all the strength and abilities of a vampire but the inability to feed.

Ezekiel was cursed by The Blood Queen centuries ago. Every time he feeds, she takes something from the woman he’s with – a memory, an emotion, a vital part of them that leaves his lover changed forever.

Compelled to feed, can Ilana save Ezekiel before his curse changes her from the woman he loves to a mindless sex slave?

Readers of Cassandra Clare and Sherrilyn Kenyon will devour this book filled with supernatural creatures and paranormal suspense.

Buy Curse of Seduction to begin this addictive series today! 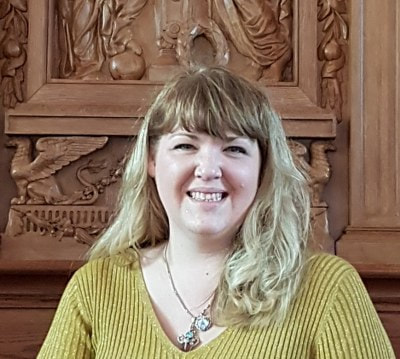 CR Robertson is a USA Today and International Bestselling Author who lives in Ireland, the most magical country in the world. From an early age, she loved faerytales and mythological stories. Her in-depth knowledge of mythology and faerylore weaves the background for the characters in each of her manuscripts.

She lives in a cottage by the sea on the east coast of Ireland. Gardening is one of her favourite pastimes and is evident in her garden that is overflowing with crystals and seasonal flowers. Her dogs enjoy the sleepy seaside town and spend their time playing in the sea. 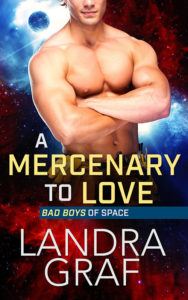 A Mercenary to Love, by Landra Graf

Book 4 in the Bad Boys of Space series

There’s only one thing she wants to steal—his heart.

When computer genius Sampson Morales’ latest security measures fail to prevent the kidnapping of an Allied Planetary Union Ambassador’s child, he has no choice but to track and save the kid himself…especially if he wants to be paid.

Zasha Gustaf believed fighting with the Humans First movement could redeem her mercenary past, but when they use her intel to kidnap an innocent, she starts to have her doubts. Running into the only man she’s ever loved and who’s on the same trail is a sign. She commits to helping Sampson stop this group from sacrificing another blameless person, but she has another motive.

Sampson and Zasha have been down this road before, except last time it led to betrayal and heartache. He can’t trust her, and her attempts at redemption are met with constant rebuke, but when everyone, even the universe, is in danger, relying on each other is the only way forward.

Is a second chance possible for either of them…or will the past repeat itself?

Whenever the planet Saturn had crossed Sampson’s mind, he’d always believed stepping foot on its surface would involve jail time, or at the very least a spot in front of a tribunal. That he was being welcomed with open arms there, the land of the uppers, via official invitation no less, had made sleep near impossible for the last three solar days. Now, here he traveled among sprawling homes with green grass lawns, ponds of clear water…enough splendor to rattle the nerve endings of any man who’d grown up poor, near starving and covered in filth the majority of the time.

“Pull your mouth off the ground, kid. Bugs exist here.” Lee, ex-assassin and weapon expert, whipped her long black ponytail over her shoulder as their holo-vehicle came to a stop in front of Ambassador Al Smith’s house.

“You never told me how beautiful the ambassador planet was.”

She scoffed and re-checked her belt that was normally stacked with knives lining the leather. Now only two remained. “The thing about beauty is that it comes with a price. No sense salivating over something you won’t want to pay for.”

Except, maybe I do.

Sampson had gone his whole life without much. Joining up with Smith’s crew, back when the ambassador was a lowly body collector, Sampson had earned his place. When he’d ditched the Body Collection Service and joined the crew of Gina, he’d found a family. Regardless of the gains, there still existed this gnawing need inside him for more.

“You could have something like this, bet on it. Show these pansy fools your big brain in action.” Lee nudged him on the shoulder before she hopped out of the vehicle. “Enough sitting around talking. Let’s do this.”

Sure, he probably could reach living on Saturn status. Al had. The captain of a death barge was now a parliament ambassador, a fairy-tale story like the ones his mother used to spout over their dinner of broth and stale food cubes. The possibility of living on a wealthy planet in a fancy house tempted, but he wanted another kind of freedom. Living here would only be another prison of servitude. The desire to roam space, go where he wanted when he wanted, to eat what he wanted… All those wants drove him on.

“Welcome to my home,” Al called out from the front door, all fancy robes, ginger beard tamed and his infamous nose ring a thing of the past.

Sampson gave a single nod out of respect and instinctually reached to tug on the edge of the beanie he typically wore on the ship. “Thanks for the invite.”

“Would you like a tour?” The older man’s booming voice carried across the lawn with ease.

Sampson patted down his ginger hair and glanced at Lee, whose raised eyebrow told him everything he needed to know. “Perhaps another time. This is supposed to be a business trip, and I’d like to get to work right away.”

The words rolled off Sampson’s tongue like contaminated waste in a slip drive, foreign and unwelcome. He wanted to throw caution to the wind, take a tour or enjoy a fancy lunch—which was exactly why Lee had come along, to keep him focused.

The invitation from Al had come in a solar week before and Gina, the ship’s artificial intelligence, had been eager to share with Sampson how his expertise was requested along with the possible payday involved.

Enough crinkle to bathe in, according to Gina. Their co-captains, Toni and Emilio, were busy with another gig and had graciously offered up Gina along with the remainder of the crew to escort him. More like babysit. The implication stung a bit but made sense. Gina wasn’t a cheap ship, and she’d been hijacked before. Though if he completed this job, the flash was his for the taking, and maybe…

I’ll have enough to buy Gina.

“Straighten up, kid. Don’t let yourself be intimidated by him. You’re smarter.” Lee casually whispered these words on their walk up.

The encouragement soothed his shaken soul a bit. The last time he’d encountered Al Smith, Sampson had been indentured to Al’s body collection barge with a twenty-year service tag. Al hadn’t been horrible to work for, but he’d still been in charge and not afraid to stow a young boy in a small crappy room in the underbelly of the ship.

Sampson and Lee reached the front entrance, and he took note of the pair of guards posted right inside. Business trip indeed.

“Yes, and once you get inside, we can chat. You don’t mind if the guards search you?” Al asked with a sheepish smile.

Trust doesn’t come easy anywhere in this damn galaxy. They’d been searched three times since they’d gotten off Gina’s shuttle at the landing port. No such thing as a small measure for the planet housing parliament’s ambassadors.

Lee smiled, a wicked fucking grin equal parts ‘screw you’ and ‘sure thing.’ “Do what you have to, but my knives stay. I already put away half of them. The rest is for your protection and Sampson’s. Anything happens to him, and you’ll be answering to your sister personally if I don’t get you first.”

Pride swelled in Sampson’s chest. Family. These people cared about him, though sometimes he wished they would let him run his own missions. Let me take charge. Sure, he’d been told he was in charge on this one by Emilio, but Lee still played the role of big bad sister no matter what.

Al held up his hands. “Sure thing. Just making sure no explosives and whatnot. Loyda would be pissed if I didn’t follow protocol.”

Sampson nodded in agreement, standing up straight and spreading his arms. “Then let’s wrap this and get to it. Time is flash.” 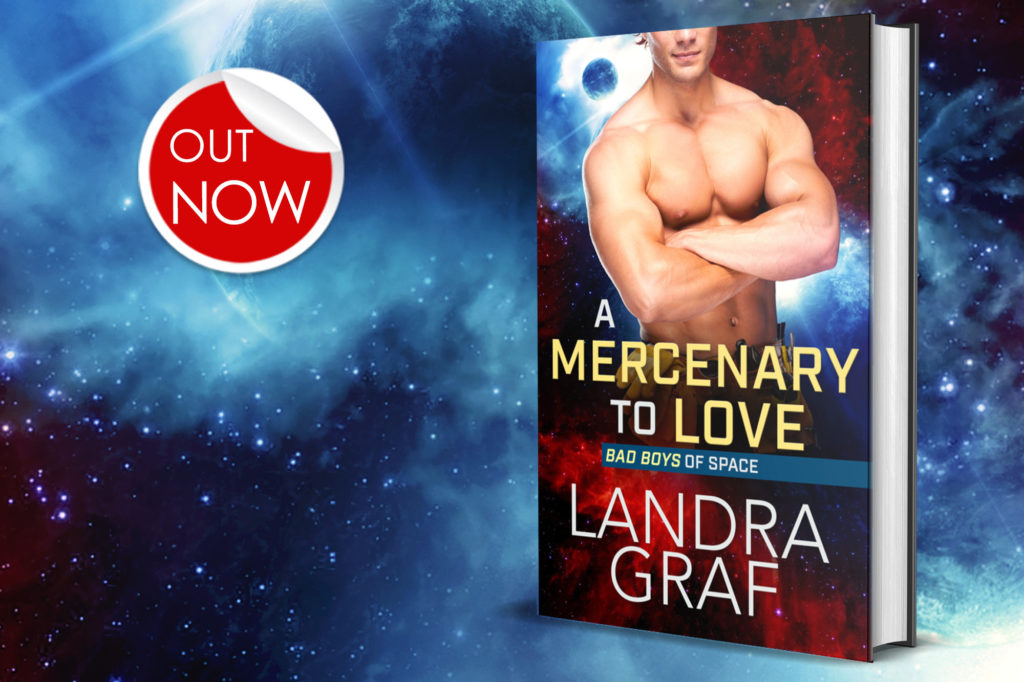 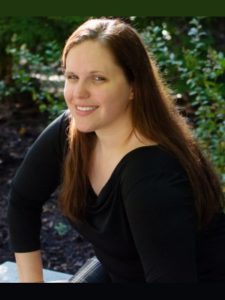 Landra Graf consumes at least one book a day, and has always been a sucker for stories where true love conquers all. She believes in the power of the written word, and the joy such words can bring. In between spending time with her family and having book adventures, she writes romance with the goal of giving everyone, fictional or not, their own happily ever after.

LANDRA GRAF IS GIVING AWAY THIS FABULOUS PRIZE TO ONE LUCKY WINNER. ENTER HERE FOR YOUR CHANCE TO WIN A LOVELY GIFT PACKAGE AND GET AND YOUR FREE LANDRA GRAF ROMANCE BOOK! Notice: This competition ends on 3rd August 2021 at 5pm GMT. Competition hosted by Totally Entwined Group. Leocadia arrives home from school to find her mom’s body. Unaware that the killer still lingers, she rushes to her mother’s side, only to be grabbed from behind. And everything fades to black.

Leo has been battling personal demons after a year of retrograde amnesia. She’s been having vivid dreams of that day. And her dreams are getting worse—she’s starting to remember. Two more bodies are discovered and they are oddly linked to her mom’s unsolved homicide.

Leo befriends her new neighbor. He’s eager to visit Star Hallow’s notorious haunted mansion. It’s located on a deserted cul-de-sac where she once lived and where her mom was murdered. But it’s the Lucien Estate, the mansion next door to her old home, where they happen upon misty ghosts, ghosts that just might help to unravel the homicides.

Will Leo’s memories send her reeling into a relapse, or will she be able to overcome her demons to find her mother’s killer – only to become the next victim?